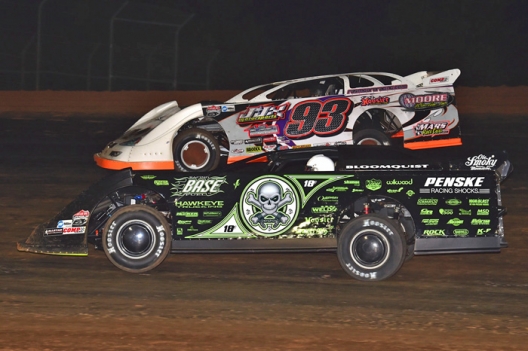 Bloomquist, 50, grabbed second place on lap 20 of the 50-lap A-Main and chased race-long leader Ray Moore of Haughton, La., relentlessly before finally making his winning move on the 48th circuit, ducking to the inside of the home-state standout off turn four to assume command.

The former Lucas Oil Series champion put several car lengths between himself and Moore over the final laps, dashing Moore’s bid for the biggest victory of his career at a track that sits less than an hour northwest of his home. Moore settled for a runner-up finish in the inaugural Lucas Oil event at the quarter-mile oval.

Ryan Gustin of Marshalltown, Iowa, finished third after joining Bloomquist and Moore in a three-way battle for the top spot in the closing laps. Reigning Lucas Oil champion Jimmy Owens of Newport, Tenn., earned Hard Charger status with a run from the 18th starting spot to fourth and Don O’Neal of Martinsville, Ind., extended his Lucas Oil points lead with a fifth-place finish.

Bloomquist’s $10,000 triumph came in his first visit to ArkLaTex, continuing his career-long penchant for gaining quick success at speedways across the nation.

“We’ve got about a 70-percent win ratio for our first visit to a racetrack,” said Bloomquist, “so we just upped our percentage a little bit tonight.”

The veteran superstar certainly was impressed with ArkLaTex

“I heard the racing would be two- and three-wide easily here,” said Bloomquist, who became the 10th different winner in 11 Lucas Oil races this season. “Well, it is definitely true! I hope the crowd enjoyed that one.”

Bloomquist, who started fourth, patiently pursued Moore before slipping his Sweet-Bloomquist car into the lead at the two-to-go signal when Moore lost just enough momentum on the outside of the track off turn four behind the lapped Randy Weaver of Crossville, Tenn.

“I saw that he didn’t want to get to the bottom,” Bloomquist said of Moore. “That was the faster line to run, so when we were keeping up pretty good running the bottom I knew if we got to traffic we might have a shot at him.

“When we caught Moore there were a few cars in front of us and I just picked the right line to get by him. He drove a heck of a race. We had just enough laps to catch him and pass him.”

Moore fell just short of a career-making victory after starting from the outside pole, but he held his held high after a personal-best Lucas Oil Series finish.

“Scott is just too good,” said Moore, who drove a new-for-2014 MB Customs entry. “Once he got by me, I knew I was in trouble. I was trying to hang on for second ahead of Gustin.

“It would have been the biggest win of my career with the competition that was here tonight. We won the Pelican (100) here and that was huge for us. I really wanted to win for the home-state fans as well as they have been behind me since I started my racing career. We came up a little short tonight, but we will be back and try again.”

Gustin, in his first-full year of Late Model racing, nearly stole the win at the end. He caught the leaders but couldn’t find a way past them.

“We were coming up quickly in the final five laps,” said Gustin, who started seventh in the Gressel Racing Rocket. “The top was going away and our car just didn't work as well on the bottom to middle part of the track. To run third against these guys says a lot about our team as we continue to grow. We have a lot to learn about these cars, but I think once we get the hang of it, we are going to get some big wins.”

Notes: Eddie Carrier Jr. of Salt Rock, W.Va., suffered a flat tire while running second on the 21st lap. ... Brian Shirley of Chatham, Ill., was the highest-finishing Lucas Oil rookie in seventh. ... World of Outlaws regulars Tim McCreadie of Watertown, N.Y., and Morgan Bagley of Longview, Texas, entered after their scheduled stop at Farmer City (Ill.) Raceway was postponed. McCreadie finished eighth after running in the top five early while Bagley faded from his pole position starting spot to a 12th-place finish. ... The Gene Boyter-promoted ArkLaTex was the first Louisiana track to host the national tour. ... The race was co-sanctioned by the Comp Cams Super Dirt Series. ... The series was slated for a tripleheader weekend, but both Friday’s opener at Jackson Motor Speedway in Byram, Miss., and Sunday’s scheduled finale at Outlaw Motorsports Park in Muskogee, Okla., fell to Mother Nature. The announcement of Outlaw’s cancelation due to a high threat of rain was made following Saturday night’s action. ... Steve Francis of Ashland, Ky., spun will attempting to overtake teammate and race leader O'Neal during the fourth heat and was forced to take a provisional to start the feature. He finished 26th, dropping him from second to fourth in the points standings. ... Former ArkLaTex Pelican 100 winner Bub McCool of Vicksburg, Miss., raced despite a lower-leg injury he re-aggravated two weeks back; pain and swelling left McCool in a boot, unable to walk and out of the car since late last month.