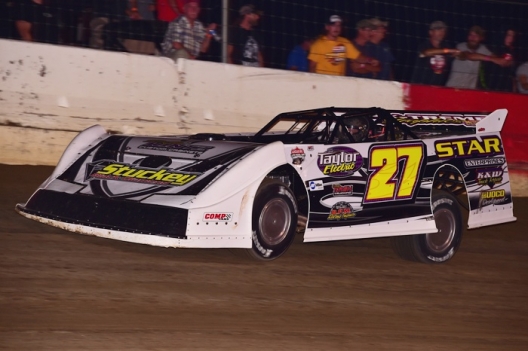 Taylor and Birkhofer were the fastest qualifiers in their respective time trial groups. Picking up heat race wins, the pair joined Friday’s other heat race winners in a redraw to lineup the first three rows of Saturday’s main event. Taylor, Friday’s overall fast qualifier, drew the pole for the 100-lap, $40,000-to-win show.

Don O’Neal of Martinsville, Ind., inherited the lead of his heat race when polesitter Scott Bloomquist slowed on the track with mechanical issues and retired to the pits. O’Neal will start third in Saturday’s feature lineup, with hometown driver Billy Moyer, winner of the sixth heat, starting from the fourth-place spot.

Wendell Wallace, also of Batesville, led every lap of the fifth heat and will start fifth in Saturday’s 100-lapper. Jonathan Davenport was the winner of Friday’s third heat and drew the sixth starting position for the feature.

The top-three cars from each heat race transferred to Saturday’s main event. Saturday’s program will include consolation races to set the lineup for the remainder of the field.

Outside polesitter Chris Brown jumped to an early lead, but fell to Moyer on lap four. Moyer led the remaining distance, with Brown finishing runner-up. Seventh-starting Jared Landers improved four spots to finish third. Justin Asplin finished fourth, with Will Vaught rounding out the top-five. Anthony Burroughs spun in turn four on lap three to draw a caution. A yellow flew on the first lap for Tyler Erb when he hit the turn-one wall; David Payne retired early. Chris Wall drawing a caution on the ensuing restart when he slowed in turn four.

Starting from the pole, Brian Birkhofer charged to the lead, building as much as a straightway's distance between himself and the field before a lap-11 caution for Jason Hughes. Billy Moyer Jr. and Bub McCool had a close battle for the the second-place spot, with Moyer finishing ahead of McCool at the checkers. Kody Mea spun coming out of turn two for cauiton on the 13th lap. Seventh-starting Jeff Taylor advanced three spots to finish fourth. Eighth-starting Jon Mitchell finished fifth.

Polesitter Jonathan Davenport took the lead at the drop of the green and led all 20 laps. Third-starting Dale McDowell finished second, but never seriously challenged Davenport. Shannon Babb finished third, with the top-three cars pulling away from the rest of the field. Jack Sullivan took the fourth-place spot, with Doug Drown finishing fifth.

Polesitter Scott Bloomquist jumped to an early lead, but slowed on the fronstretch on lap seven with a broken right-front shock. He exited the racetrack. Second-running Don O'Neal inherited the point and led the remaing distance. Outside polesitter Mike Marlar finished second, with fourth-starting Jimmy Mars advancing one spot to finish third. Seventh-starting Eddie Carrier Jr. finished fourth, with Dennis Erb Jr. rounding out the top-five.

Fast qualifier Stacy Taylor held off runner-up finisher Jimmy Owens to win the first heat. John Blankenship made an early challenge, but slipped to finish third. Outside polesitter Jeremy Payne retired early. Jason Papich slowed on the frontstretch for a lap-six caution, retiring to the pits. A yellow flew on lap five for Rick Hearnsberger and Joey Smith when they spun in turn four; they tangled again on lap seven for another caution. Smith, Moore and Dwight Falcon tangled coming out of turn two on the first lap for a complete restart. Moore and Smith rejoined the field; Falcon retired.

The Lucas Oil tour makes its lone 2014 visit to Batesville Motor Speedway for the annual Comp Cams Topless 100. The unique event requires the cars race roofless, allowing spectators a better view of the drivers in the cockpit.

After sanctioning the only other open-engine Late Model event at the 3/8-mile high-banked oval earlier this season, the Comp Cams Super Dirt Series is co-sanctioning the Topless 100 for the first time.

Friday’s preliminary action will include time trials and heat races that will set a portion of the field for Saturday’s 100-lapper. With 63 cars on hand, qualifying will be split into two groups, with six  20-lap heat races to follow.

The top three cars from each heat race will transfer to Saturday’s main event. Consolation races will be contested Saturday to set the remainder of feature lineup.