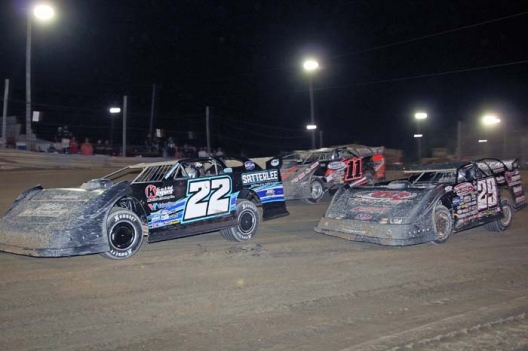 DELMAR, Del. (Aug. 14) — After a disappointing two-week trip through the Midwest, Gregg Satterlee returned to his home region and returned to form with a victory in Thursday night's Fulton Bank 50 at Delaware International Speedway.

Satterlee, 30, of Indiana, Pa., survived a close call in traffic and turned back challenges from Darrell Lanigan of Union, Ky., at the half-mile oval in southern Delaware, earning $10,050 for his third career World of Outlaws Late Model Series victory.

"We had kind of a rough couple of weeks, but that's part of traveling," said Satterlee, who scored just one top-10 finish in four WoO appearances in traveling with the circuit to Illinois and Wisconsin in late July and early August. "We're learning and getting better. I'm sure if we hadn't done all that traveling we wouldn't be standing up here (in victory lane) tonight."

Sixth-starting Lanigan, the two-time WoO champion and current series points leader, was second at the finish, 0.343 seconds behind Satterlee. Fourth-starting Austin Hubbard of Seaford, Del., was just behind the two leaders in third, while Tim Fuller of Watertown, N.Y., advanced from eighth to finish fourth. Seventh-starting Ross Robinson of Georgetown, Del., rounded out the top five — earning a career-best WoO finish — in a race slowed by four cautions.

Satterlee's victory featured plenty of drama. Starting from the pole, his Satterlee Petroleum Distributors-sponsored Rocket Chassis got the jump on outside polesitter Amanda Whaley of Millsboro, Del., who quickly dropped to the tail of the field after she pushed far up the track entering the first corner.

Whaley's push up the track created a scramble among the front few rows, and Lanigan took advantage to charge from sixth to second on the race's opening lap. He soon began applying pressure to Satterlee, making low-side bids for the lead through the race's opening laps with Hubbard lurking just behind in third.

The leaders caught the tail of the field by lap 14, setting up a tense battle. Satterlee opened the door for Lanigan to take the lead when he attempted to drive around tail-running Whaley on lap 17 and slid high in turn two. But Lanigan repeated Satterlee's mistake on the following lap, giving Satterlee room to muscle his way back into the lead on lap 18.

The excitement continued on the following lap when Satterlee got into the back of Nick Davis of Millsboro, Del., while trying to put him a lap down. The contact turned Davis sideways directly in front of Satterlee, but Satterlee stayed in the throttle and used more contact to push Davis' car up the banking and out of his path.
Satterlee made it through the incident without stopping, allowing him to retain his position at the front of the field as the race went under caution for Davis' stalled machine.

"I got into the one lapped car and turned him around. I didn't mean to do that, but he kind of come down on me," Satterlee said of the contact that nearly cost him the race. "When he hit me I had to just spin him out so I didn't get collected with him.

"I hit him way harder than I thought I was going to. I was hoping that the front bumper wasn't bent down into the racetrack or back into the tire. But luckily it was all good. These Rocket race cars are real strong and can take some abuse."

The caution for Davis calmed things at the front of the field as Satterlee began to edge away from Lanigan through the race's middle portions. But traffic again came into play in the final 10 laps, allowing Lanigan to close the gap and bring Hubbard along with him. The three leaders raced nose to tail through the closing circuits, but Satterlee kept his car glued to the track's dominant bottom groove and held on to claim the victory.

Lanigan settled for the runner-up finish in his Keyser Manufacturing-sponsored Club 29 Race Car, padding his already healthy WoO points lead with his 23rd top-five finish in 27 A-Mains this season.

"We had a good hot rod," said Lanigan, a three-time winner at Delaware who was the runner-up at the track for the second straight year after fishing second to fellow WoO regular Tim McCreadie of Watertown, N.Y., in 2013. "It sucks to run second, but sometimes you gotta do it."

The race's four yellow flags all appeared in the first half of the race. The lap-18 caution for Satterlee's tangle with Davis was the first break in the action, and a mid-pack tangle on the ensuing restart resulted in Andrew Mullins of Laurel, Del., spinning in turn and hometown driver Kerry King Sr. getting into the wall at the exit of turn two.

The third yellow waved when Whaley's left-rear tire blew, leaving rubber all over the front straightaway. The final caution appeared on the restart for a tangle involving Mullins, Davis and Pancho Lawler of Glenville, Pa.

Notes: Satterlee’s previous WoO victories came in 2013, on July 30 at Shawano (Wis.) Speedway and Aug. 31 at Selinsgrove (Pa.) Speedway. … Satterlee became the 14th different winner on the 2014 WoO tour. … Several notables failed to qualify, including former Delaware WoO winner Jamie Lathroum (hit wall in heat), Ricky Elliott (fell one spot short in a B-Main after switching to his backup car following hot laps), Vic Coffey, Mark Byram and Mark Pettyjohn. ... Despite a seemingly perfect weather forecast, a black cloud formed above the track before the start of the heats and began dropping drizzle as the first prelim began. The precipitation became heavy enough to force officials to put out a caution flag on lap eight of the 10-lapper, but the rain quickly ceased and the race was restarted with Fuller taking the victory. There were only a couple spits of rain for the remainder of the evening. … The Fulton Bank 50 kicked off a tripleheader weekend for the WoO tour in the Mid-Atlantic region. Action moves across the Chesapeake Bay to Potomac Speedway in Budds Creek, Md., on Friday while a visit to Winchester (Va.) Speedway wraps up the weekend on Saturday.