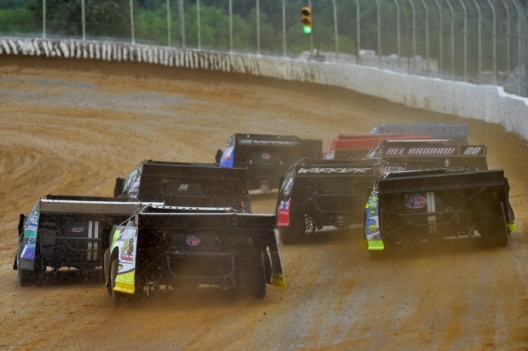 Bloomquist and Owens were the top earners in combined passing points after two rounds of five heat races in Florence’s new format for the $50,000-to-win event. In all, 16 drivers, including Florence points leader Jesse Lay of Walton, Ky., guaranteed themselves starting spots in the 100-lap main event.

Bloomquist, a two-time North-South 100 winner, shined brightest, dominating his first heat race after starting outside the front row, then roaring from the 10th starting spot in his second heat race to become the night’s only double-heat winner.

Owens, a three-time North-South 100 winner, came from ninth to second in his first heat race, then won his second heat from outside the front row to finish second in the passing-points system that rewards drivers for overtaking drivers in the preliminary events.

Ninth-starting John Blankenship charged past polesitter Duane Chamberlain on lap eight and led the remaining four circuits. Chamberlain led the first seven laps, but fell to Florence weekly points leader Jesse Lay on the final lap. Stephen Breeding moved from the tail of the field to salvage a fourth-place finish. Tenth-starting Wayne Chinn rounded out the top five. A yellow flew on lap 10 for Zak Blackwood. Skylar Marlar spun for a caution on the first lap and retired. Dustin Neat and Stephen Breeding tangled in turn two on the restart.

Second-starting Jimmy Owens jumped to the lead at the drop of the green flag and led all 12 laps. Polesitter Mike Marlar held on to the second-place spot. Don O'Neal and Dale McDowell battled for third before McDowell slipped to fifth. Pearson to took the fourth-place spot. Eighth-starting Mason Zeigler advanced two places to finish sixth.

After slipping back early, third-starting Gregg Satterlee came alive mid-race and took the lead from Randy Weaver on the 10th lap. Satterlee stalked frontrunners Matt Miller, who started on the pole, and Weaver the first half of the race before making his winning move. Miller led the first four laps, but Weaver squeezed through a hole between the backstretch wall and Miller's car on the fifth lap to take command before losing the lead to Satterlee. Jimmy Mars was part of an early caution but rallied to finish fourth. A first-lap caution flew when fifth-starting Scott James got sideways in turn one, collecting James Rice. A second yellow flew on the scond lap when former North-South 100 winners Mars and Steve Shaver tangled entering turn one, collecting Robby Hensley. All three continued.

Polesitter Dustin Linville held off a rally of Brandon Overton, who rallied to the tail after a first-lap flat tire. Overton settled for second ahead of fifth-starting Steve Casebolt. Jason Hughes started outside the front row but slipped back to finish sixth in the 13-lapper. The most serious of three cautions came n the fourth lap when Brad Neat slammed the inside frontstretch wall while he battled with Jared Landers; Neat was able to steer his car to the pits. The first start was called back, and another yellow appeared when Jeff Aslip lost a wheel on the second start.

Scott Bloomquist charged from the 10th starting spot to take the lead on the 11th lap, putting him near the top of the passing points leaderboard. Sixth-starting Eddie Carrier Jr. charged past polesitter Nick Latham on the fourth lap, leading seven laps until he fell to Bloomquist. Latham held on to the third-place spot, with Tim McCreadie finishing fourth. Steve Francis, a winner in the first set of heats, rounded out the top-five.

Passing points (after first round of heats)

Polesitter Jared Landers built a straightaway lead after four laps and cruised to a 12-lap victory in the third heat, staying well ahead of some feisty action behind him. Outside front-row starter Dingus Griffin held the second spot the first half of the race, but ninth-starting Jimmy Owens went by on the eighth lap while dueling Tim McCreadie much of the way. Owens, McCreadie and Steve Casebolt — who took the fourth spot from Griffin on the final lap — followed Landers to the checkers. Jay Shell was scheduled to start outside the front row but elected to start on the tail. Mike Fryer slowed on the last lap to finish last

Getting a good start and an even better restart after an early caution, home-state driver Michael Chilton grabbed a impressive victory in the fourth heat. Chilton led fellow Kentuckians Robby Hensley and Dustin Neat at halfway, but both had problems after a lap-seven caution. With Hensley and Neat out of the mix, the rest of the race was a slide-job battle between fifth-starting Don O'Neal and 10th-starting Mike Marlar for the second spot. O'Neal got the second spot at the finish with Marlar third ahead of Brandon Overton and Hensley. Dustin Neat was running second when he broke in turn two on the eighth lap and got hung up trying to pull to the infield. Two other cautions flew for turn-four spins for Brian Gray, the first on the first lap and the second on lap seven. Zak Blackwood retired with a flat right-rear on the lap-seven caution and Scott James was running third when he pulled to the pits before a lap-nine restart.

Third-starting Jason Jameson, winner of the UMP DIRTcar Summernationals stop at Florence last month, overtook polesitter Dennis Eb Jr. on the eighth lap and pulled away for a victory in the second heat. Erb led comfortably early but Jameson used an unusual groove to reel him in and go ahead. Jameson took the checkers more than a straightaway ahead of Erb with eighth-starting Dale McDowell piling up passing points in finishing third. Eddie Carrier Jr. was fourth and 10th-starting Jason Hughes fifth.

Second-starting Scott Bloomquist led all 13 laps, finishing four seconds ahead of runner-up Mason Zeigler. Zeigler challenged Bloomquist on the first lap, but was unable to keep pace with the race leader. Sixth-starting Doug Drown advanced to finish third.Randy Weaver rallied from the 10th starting position to finish fifth. Polesitter Steve Landrum slipped to the tail of the field following a shaky start.

Instead of time trials, a format similar to I-80 Speedway’s Silver Dollar Nationals will be used for the first of two nights racing. Friday’s preliminary night of action will be made up of two sets of heats by random draw; the first five heats will line up straightup by draw while the second set of five heats will be inverted.

The top 16 in combined passing points will be locked into Saturday’s 100-lap feature. Two dashes and at least two consolation races on Saturday will precede the $50,000-to-win main event.

While much of Kentucky has received rain throughout the day, Florence Speedway has avoided most of the wet weather. The pit area is dry and pack trucks began working the racing surface shortly after 5:30 p.m. when the gates opened on schedule.

Florence Speedway sold a record number of presale tickets for this year’s event. … The National Dirt Late Model Hall of Fame induction awards ceremony will take place prior to Saturday’s racing action. … Besides Late Models, Friday’s program includes modified heat races and consolations. … Two-time North-South 100 winner Steve Shaver of Vienna, W.Va. is driving Brad Malcuit’s No. 79 machine; he won in the car last weekend at Muskingum County Speedway in Zanesville, Ohio. … Hall of Fame inductee Steve Francis of Ashland, Ky., unveiled a throwback car when he unloaded Wednesday evening. … Kent Robinson of Bloomington, Ind., and Justin Rattliff of Campbellsville, Ky., were expected entrants, but Robinson is out with a broken rib (in a non-racing related accident) while Rattliff underwent surgery Thursday on a broken hand (an injury suffered racing in Tazewell, Tenn.). … Jesse Lay of Walton, Ky., leads the weekly track points; he’s first in line for a provisional starting spot if he does not race his way into the event. ... Dingus Griffin of Ohatchee, Ala., is a surprise entrant. ... Doug Drown of Wooster, Ohio, is back at Florence for the first time in 12 years. ... The No. 44x of Jay Shell is powered by a Crate engine. ... Heat race lap counts vary from heat to heat. The prelims will be two laps more than the total number of cars. For instance, for an 11-car heat, it will be 13 laps. For a 10-car heat, it will be 12 laps.