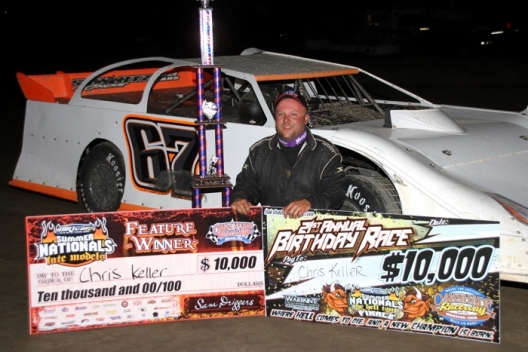 That included Keller, a 36-year-old from Adrian, Mich., who tallied a career-high payday of $10,000 for winning his home track’s biggest event in his just his fourth start of 2019 following a three-year sabbatical from regular Dirt Late Model action.

“Oh, man, it’s awesome,” Keller said soon after completing his stunning march from the pole position to a flag-to-flag triumph. “I can’t believe it. I’m still kind of like … my head’s (going) a thousand miles an hour. I’m excited and I’m mixed up at the same time.”

Driving a Cornett-powered 2016 Swartz Race Car that he fields in partnership with Ohio’s Jeff and Belinda Robertson, Keller showed no residual rustiness from his long competitive absence. He was flawless for the entire distance as he kept Oakshade’s Friday-night feature winner Kent Robinson of Bloomington, Ind., at bay and ultimately drove away to a commanding advantage over the final 10 circuits after he cleared a lapped car while his pursuers didn’t.

Keller crossed the finish line 6.293 seconds — over a full straightaway — ahead of Bloomington, Ill.’s Jason Feger, who registered his second runner-up finish in as many nights after slipping past Robinson for the position on lap 42.

Robinson settled for a third-place finish after starting from the outside pole and chasing Keller until Feger overtook him. Travis Stemler of Ionia, Mich., reached fourth place on lap 22 and held the spot to the checkered flag while Brian Shirley of Chatham, Ill., advanced from the ninth spot to secure a Summer Nationals championship-clinching finish of fifth.

Shirley, 38, needed at least a ninth-place finish in the 2019 Hell Tour points finale to assure himself a second consecutive and third overall series crown. He settled into fifth place on lap 22 and never wavered the rest of the way in his Bob Cullen-owned machine to claim the $25,000 title by 46 points over Bobby Pierce of Oakwood, Ill., whose bid for a fourth career Summer Nationals championship ended with a quiet 11th-place finish.

The resolution of the championship battle after 18 events was almost overshadowed by the storybook run of Keller, who entered the weekend having shown speed in his return to the cockpit (his two previous starts at Oakshade saw him finish fourth on June 22 and win on June 29) but still harboring no illusions about his chances for a five-figure victory. Even after winning his heat race and drawing the pole position for Saturday’s feature, he maintained modest expectations.

“With (Robinson) starting on the outside (of the front row) like that, the guy’s fast, and he’s got a ton of experience compared to me,” said Keller, who finished 11th in Friday evening’s 40-lap A-main. “I expected to see him go around me (for the lead) and I was gonna tuck in and try to do my best.

Keller surged in front at the initial green flag and stayed several car lengths ahead of Robinson until reaching slower cars, an obstacle that allowed Robinson to draw close. The race’s second and final caution flag, on lap 18 when Ryan Missler of Bellevue, Ohio, slowed on the backstretch due to a broken driveshaft, stopped Robinson’s pressure, but Robinson pulled within striking distance of Keller again with 15 laps remaining as Keller found himself behind the slower vehicle driven by fellow Adrian, Mich., resident Jake Rendel.

“Once I caught the lapped cars I thought somebody was on me, but I think I was hearing lappers in front of me and they were giving me that false feeling,” Keller said. “I just tried my best to keep the car straight and smooth.

“There was a little bit of a rubber groove. You had to be careful. A couple times I got the left rear down too low and got it out of the groove and it just kind of killed it, but when it happens you just got to mentally think to slow yourself down, drive back into the groove and then get back to the throttle. It’s hard to do when you’re leading a big race, but somehow I pulled it off.”

The key move of the race for Keller came on lap 39 when he finally cleared Rendel. As Robinson and Feger got jammed up behind Rendel, Keller easily cruised away to an ever-increasing edge.

While jockeying to find a way around Rendel, Robinson lost second place to Feger on lap 42. But Feger had no better luck trying to overtake Rendel; it took him until lap 49 to finally pass Rendel — and at that point, Keller was long gone.

Feger, 41, felt that his MB Customs car was “getting better and better” after he shot by Jeep Van Wormer of Pinconning, Mich., for third on the lap-18 restart. He was unsure if he had anything for Keller, but any hopes of finding that out went by the wayside when he couldn’t quickly dispose of Rendel, who stayed in the preferred inside groove and seemed to stay on the gas when Feger tried to surge by him on the outside going down the straightaways.

“That guy ran us to death,” Feger said of Rendel. “It’s frustrating that there’s no respect, or no courtesy there. I mean, he was obviously blocking for his buddy (Keller) and that’s what he told us. I understand that, but it’s just frustrating because we’d like to put on a show for the fans.”

For Feger, aggressively shoving Rendel out of his way wasn’t an option.

“I don’t drive that way,” said Feger, who gained one spot in the Summer Nationals points standings, finishing fourth, after six-time Oakshade champion Rusty Schlenk of McClure, Ohio, retired at the halfway mark and finished 19th. “I don’t want to take a chance of tearing up my stuff or something else happening. There’s a lot of guys who just would’ve moved him.

“But second’s good,” he continued. “We had a couple good nights and the car’s running strong, so hopefully we can just carry some momentum going forward.”

The 32-year-old Robinson was also left shaking his head by the difficulty he and Feger had attempting to lap Rendel.

“I felt like I was just getting better and starting to pull up and put a little pressure on (Keller), and it looked like he might have been getting a little tight,” Robinson said. “I wasn’t real good, but I was just gonna try to pressure him and hopefully he’d make a mistake. Then we caught that lapped car and he commenced to racing us.

“(Keller) snuck by (Rendel), and then (Rendel) got really sideways. It’s part of it I guess. Last night when I was leading lapped cars were racing each other and I understand that, but when you’re a half lap behind the guy you’re trying to pass and racing guys that are going for a couple thousand dollars difference, it’s pretty frustrating.”

Nevertheless, Robinson hailed the performance turned in by Keller.

“Hat’s off to him and his team,” Robinson said. “He did a great job, and that’s a pretty cool deal for him to win here. He said this is by far his biggest win, so that’s a storybook, to win at your home track at a big race.”

Robinson also noted that Keller made a shrewd tire-compound choice for the 3/8-mile oval’s conditions.

“Chris just made the right call on tires,” Robinson said. “I never would have thought the compound that he ran (on the right-rear corner) would make it. He had a (Hoosier LM) 30 on and we all had (harder) 40s on.”

Keller conceded that his tire selection really wasn’t the result of any special calculation.

“All weekend we’ve been watching the tires on this car and they’ve just been wearing good,” Keller said. “And honestly, I just didn’t want to go over and buy a brand-new 40. I was like, ‘I have my brand-new 30. I spent my tire budget already. Let’s throw it on and burn it off. If it’s junk at the end, it’s junk. I don’t care.’”

Keller’s 30-compound rubber got him safely to the finish. And with the big money he collected for his first-ever Summer Nationals triumph, he’ll have some extra cash in his racing budget to run some selected races over the remaining months of the 2019 season.

“The pay is huge,” said Keller, who stepped away from driving a Dirt Late Model for three years to focus on building his machine shop business and now aims to just “have fun” with his racing. “This sport’s getting so expensive. I mean, it’s a $700, $800 weekend when the track’s slick like this and you’re going through tires, so to be able to get something to race off of for the next couple of months is amazing.”

Prior to the lap-18 caution flag, the race’s only other slowdown came on lap five when Brad Wade of Dundee, Mich., spun in turn two.

Chris Keller dominated the entire distance, rolling to victory in a race slowed only by a lap-eight caution flag for a backstretch tangle involving Jake Rendel, Hillard Miller and David Scott Jr. Chad Finley finished 1.624 seconds back in the runner-up spot with Brian Ruhlman third and Ryan Kent placing fourth after making a last-lap pass of Rody Schroyer.

Finding grip on the outside of the track, Jason Feger overtook Devin Shiels for the lead on lap eight and went on to grab the checkered flag. Shields, who had passed Feger for the top spot on lap two, settled for second, 0.826 of a second behind Feger. Dan Wallace and Ryan Missler completed the transfers. Caution flags flew on lap four for Bill Reeves’s spin in turn two and on the ensuing restart for twin twirls between turns one and two by Reeves and Nick Fenner.

Frank Heckenast Jr. cruised to a flag-to-flag victory, outdistancing Travis Stemler by a commanding margin of 3.990 seconds. Rusty Schlenk challenge Stemler on the final lap but settled for third while Andrew Reaume outdueled Brett Miller for the last transfer spot.

Kent Robinson worked around the outside of Jeep Van Wormer to grab the lead on lap five and drove away from the field, winning by 3.232 seconds over Van Wormer. Points leader Brian Shirley finished third and his pursuer in the standings, Bobby Pierce, placed fourth. The race’s original start was aborted due to a turn-two tangle that left Matt Lindsey facing the wrong direction. Lindsay was later involved in a lap-five tangle between turns one and two with Colin Shipley and Bob Mayer

Gunning for a sweep of the weekend, Kent Robinson of Bloomington, Ind., kicked off Saturday's action by logging the overall fastest time in qualifying with a lap of 15.931 seconds. He will start from the pole position in the first heat.

Gregg Satterlee of Indiana, Pa., saw his first-ever visit to Oakshade come to an early end due to terminal mechanical trouble that struck his No. 22 during hot laps. Friday's sixth-place finisher scratched from action for the remainder of the night.

The DIRTcar Summer Nationals points race comes to an end Saturday night with the running of the 21st annual Birthday Race at Oakshade Raceway, a series stalwart that has hosted the Hell Tour every year since 2000. Only once, in 2002, was the speedway’s event not the finale of the Summernationals.

Saturday night’s program will feature split time trials for the 44 entered drivers. Hot laps are scheduled to begin at 6 p.m.