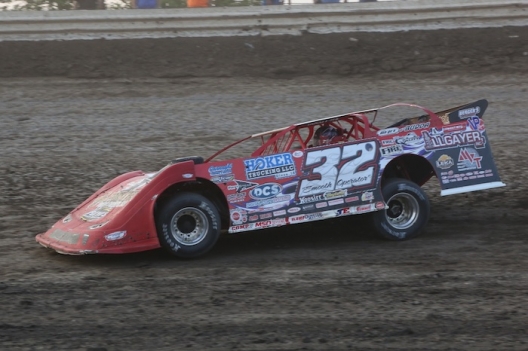 Among the 16 cars returning to complete the Hell Tour event that was rained out on June 14, Pierce inherited the outside pole starting spot when local racer Charlie Olsen spun to draw a caution on the green flag lap. Charging to the front of the field on the race’s third start attempt, the unchallenged Pierce led flag-to-flag to capture his second series victory of the season.

But despite his dominant performance, Pierce said he struggled to find traction throughout the 50-lapper, even making contact with the wall in turns one and two late-race as he searched for grip on the racetrack.

“I was very worried,” Pierce said. “I knew Feger was catching me a little bit. I was searching hard for traction. That was probably the slickest racetrack I’ve ever been on. If it was a 100-lapper I know a tire we all probably would have went with. We had to go with what we did to fire off. Last night we missed the tire game and it really kind of bit us. The thing never fired until really late.

“Today we went with what we did and I guess it paid off because I got the lead there. Halfway through though, and from there, I was just really struggling. I could not get any bite. The only bite I had was when I was actually kind of banging off the wall and let the car absorb some of the hit and take off again and just use that very little bit of cushion up there. One and two was mostly just dust, but I think it kind of was better than just running in the complete glass that the black was.”

Pierce entered Monday’s program 12 points behind Brian Shirley of Chatham, Ill., in the Summer Nationals points standings. But with his victory, Pierce retakes the points lead heading into the final four nights of series action in Michigan and Ohio. He’s hopeful his team has hit on a good setup for the tracks with characteristics similar to Sycamore.

“It was a pretty tricky day,” Pierce said. “Some people were kind of guessing on setup and stuff. But then the track really blew off a lot more than I think a lot of guys were expecting. It wasn’t really too hot outside, but it threw some guys for a loop.

“That’s why we were all just really searching to find bite. None of us could really roll through the black very well like we sometimes can. But it makes me feel good because I think a lot of these tracks coming up will be pretty slick like that. Hopefully we can just fine-tune on this setup a little bit more.”

While Pierce stretched his lead to a full straightaway in the early running, Feger was able to close the gap between himself and the race leader with around 15 laps remaining in the distance. Never in a position to challenge for the lead, Feger fought off Unzicker in the final laps to end the night with a second-place finish.

“We were actually able to put a night together and not make any mistakes,” Feger said. “The car was really good. I felt good hot lapping and didn’t really change a whole lot. I got a little free at the end. But I think them guys all went to the bottom and it felt like it kept getting crumbier out there.

“There through the middle part, I thought I was making a little ground on Bobby and I was just kind of hoping I’d get in position. Then I realized that wasn’t going to happen. Second’s good. It’s been a struggle. We’ve had a lot of DNFs, a lot of bad luck. It’s been a tough Summer Nationals for sure. But we’ve been working hard. It finally feels good to have a good run all night long.”

Setting his car up to run the bottom of the racetrack, Unzicker said it took a few laps for him to really get rolling. Battling Feger for second late-race, Unzicker was happy to come away with a podium finish.

“We pretty much set up for the bottom, kind of knew it was going to be a bottom racetrack,” Unzicker said. “It was a little slimy there at the beginning on the bottom and then it was working in nice. Through the middle of the race we searched around through the middle and the top. We was just a little too free to be up there playing around too long.

“At the end I felt like we was catching them. I was underneath Feger there with like nine to go or eight to go, and then I kind of caught a lapped car and it shuffled me back a few car lengths and I wasn’t able to gain my ground back there at the end. We’ve had a terrible Summer Nationals, so it feels good to be in the top three.”

Notes: Pierce finished 1.358 seconds ahead of Jason Feger at the checkered flag. … Pierce scored his second Summer Nationals victory of the season; his first came on July 6 at Fayette County Speedway in Brownstown, Ill. … The race was slowed by a single caution on the second green flag attempt. Outside polesitter Charlie Olsen spun in turns one and two, collecting Paul Stubber, Jonathan Brauns and Jay Brendle.

Sixteen of the 22 drivers locked in to the Sycamore feature returned for Monday’s finale. Among the six drivers who did not return are Brandon Sheppard of New Berlin, Ill., Walker Arthur of Forrest, Va., Billy Moyer of Batesville, Ark., Allen Murray of San Antonio, Texas, Shannon Babb of Moweaqua, Ill., and Spencer Diercks of Davenport, Iowa. … Planning to enter this weekend’s Lucas Oil Series events at Tri-City Speedway in Granite City, Ill., and Lucas Oil Speedway in Wheatland, Mo., Babb has elected to forgo the remainder of the Hell Tour. … On the road with the World of Outlaws Morton Buildings Late Model Series, Sheppard will be back in action on Tuesday at ABC Raceway in Ashland, Wis. … Arthur’s Summer Nationals campaign ended on June 27 at Brownstown (Ind.) Speedway. … Brian Shirley of Chatham, Ill., is among drivers that are on hand Monday at Sycamore. While he initially considered dropping off the Hell Tour to enter events at Tri-City and Wheatland, Shirley, who holds a 12-point advantage in the points lead, now plans to make the trip to Michigan and Ohio later this week. ... Dennis Erb Jr. of Carpentersville, Ill., was a late arrival for Monday's makeup event, but will assume his spot on the pole of the feature lineup

The DIRTcar Summer Nationals returns to Sycamore Speedway in Maple Park, Ill., to wrap up its June 14 event that was rained out just before the feature was contested. Monday’s 50-lap main event pays $10,000-to-win.

Shannon Babb of Moweaqua, Ill., was the winner of last year’s series stop at Sycamore. Initially slated to start inside the ninth row of the feature lineup, Babb is among drivers that did not return for the Sycamore finale.

Monday’s program will include hot laps and the 50-lap main event. The Summit Modified Nationals portion of the show will include a consolation and 25-lap feature, with pure stocks also in action.