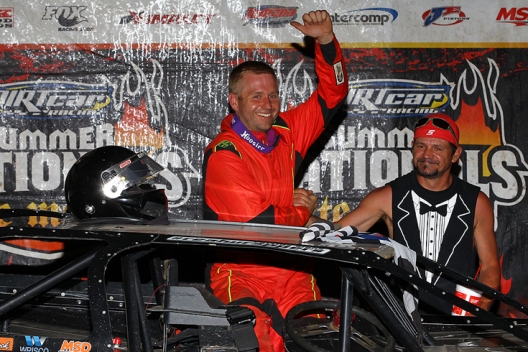 Charging around the high side, the fifth-starting Marlar overtook third-starting Brian Shirley of Chatham, Ill., on the 26th of 40 laps, leading the rest of the way for a $5,000 payday at the quarter-mile western Illinois oval. The victory marked Marlar’s second of the holiday weekend, following Thursday's Lucas Oil Late Model Dirt Series triumph at Portsmouth (Ohio) Raceway Park.

“Brian (Shirley) is one of the best guys at sniffing out where he needs to be on the racetrack,” Marlar said. “Just like Gordy (Gundaker) was saying last night, he moves around a lot. I found a little something there maybe a lap or two before he did. When I had that little run on him, I knew he was fixing to move over where he needs to be and I had to get there before he did. Luckily I got a left-front up to his door there before he could move over.”

Polesitter Rusty Schlenk of McClure, Ohio, charged to the lead at the drop of the green flag, as fellow front-row starter Bobby Pierce of Oakwood, Ill., fell back to fifth after slipping over the berm in turn two. Powering ahead of Schlenk down the backstretch, Shirley pulled ahead to take the point on lap four, stretching his lead in the early running.

Marlar was on the move early, running second when a caution fell on lap 21. Gaining momentum from the restart, Marlar raced door-to-door with Shirley at the line on the 25th circuit, nosing ahead one lap later to take the lead. Effectively working through late-race lapped traffic, Marlar went on to notch his sixth career Summer Nationals victory.

“Brian, he was running around that bottom and I think he probably sensed that it wasn’t working good.” Marlar said. “It probably hurt me just a little bit too to have that little run on him. I was trying to time it to where when I passed him, I would officially just go by him. I did not want to show him my nose. He almost got up there but didn’t hardly make it. I was able to get by. From there I think we was probably dead even.”

Shirley's runner-up finish moved him back into the series points lead while Schlenk ended up third. Seventh-starting Frank Heckenast Jr. of Frankfort, Ill., advanced three spots to run fourth, with Pierce, who entered the race with a three-point edge on Shirley, rounding out the top five.

“We just did a bad job,” Shirley said. “Marlar is a good racer. It was a little easier for him probably when he was running second to move around a little. I passed everybody on the bottom, so I thought, ‘Well, the bottom’s pretty good.’ I could feel it going away a little. But it’s so dark here and so hard to see, I couldn’t see my crew guy at all. And then at the last minute, I heard Marlar, but it was too late. I tried to squeeze him the best I could. But it was just one of those deals he had enough on me that I couldn’t move up where I needed to move.”

After a challenging week that included a DNF in Saturday's stop at Fayette County, Schlenk said he felt like he and his team were finally moving in the right direction, evident by his podium finish.

“It seemed like they got rolling a little bit better there on the starts,” Schlenk said of Marlar and Shirley. “For their reason their stuff fired better than mine did. It took me a few laps to get rolling. It started to lock down there a little bit at the end and then I got too tight. But I’m happy to hold on to third after the week we’ve had. We’ve been struggling and chasing this car all over the place. But I think we found some speed finally.”

Notes: Marlar scored his second Summer Nationals victory of the season; he previously won on June 27 at Brownstown (Ind.) Speedway. ... Marlar has six 2019 victories, three on the Lucas Oil Series, two on the Summer Nationals. ... The race was slowed by two cautions: A yellow flag waved on the third lap for debris and David Jaeger spun in turn two to draw a caution on lap 21.

Polesitter Brian Shirley shot to the front of the field at the drop of the green flag, as Rusty Griffaw and David Jaeger raced side-by-side for second in the early running. The battle for second continued at the halfway mark, as Shirley stretched his lead to nearly a full straightaway. A yellow flag waved on lap six when second-running Griffaw came to a stop in turn one. Shirley led the remaining laps to win the heat, with Jaeger finishing second and Dewayne Kiefer running third.

Charging around the high side, Mike Marlar edged ahead of Rusty Schlenk to take an early lead. As the top two car distanced themselves from the field in the opening laps, it was a close battle for third between Dylan Hoover, Mark Burgtorf and Denny Wordwoth. Marlar and Schlenk raced door-to-door mid-race, with Schlenk nosing ahead to lead lap six. Schlenk won the heat, with Marlar running second. Hoover finished third.

Polesitter Kyle Bronson took an early lead, as Frank Heckenast Jr. and Bobby Pierce raced side-by-side through the opening laps. Overtaking Heckenast on lap three, Pierce set his sights on Bronson, challenging for the lead at the halfway mark. Pierce slid ahead of Bronson out of turn two to grab the lead on the seventh lap. Pulling away in the final laps, Pierce won the heat, with Bronson and Heckenast rounding out the podium.

Tripping the clock with a time of 13.164 seconds, Kyle Bronson of Brandon, Fla., was Sunday’s overall fast qualifier at Quincy. He will start on the pole of the evening’s first heat race. As the quickest qualifiers in their respective time trial groups, Rusty Schlenk of McClure, Ohio, and Brian Shirley of Chatham, Ill., will join Bronson as heat race polesitters.

After fighting rain earlier in the week, the DIRTcar Summer Nationals moves to Quincy (Ill.) Raceway on Sunday for its fourth straight night of action. The quarter-mile oval hosts Hell Tour competitors for the 10th time in series history.

Brian Shirley of Chatham, Ill., was the winner of last year’s Summer Nationals stop at Quincy. With his Saturday victory at Fayette County (Ill.) Speedway, Bobby Pierce of Oakwood, Ill., holds a slight advantage in the series points standings heading into Sunday’s event. He picked up a tour victory at Quincy back in 2016.

Sunday’s program will include hot laps, time trials, preliminary races and the 40-lap feature event. The Summit Modified Nationals and sport mods will also be in action.