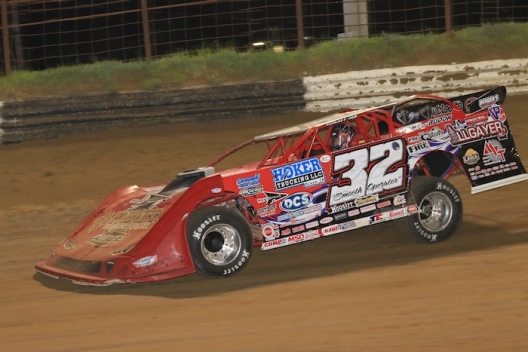 BROWNSTOWN, Ill. (July 6) — Bobby Pierce was a man on a mission entering Saturday’s DIRTcar Summer Nationals stop at Fayette County Speedway. After a controversial finish Thursday at Macon (Ill.) Speedway and a near-miss Friday at Farmer City (Ill.) Raceway, the Oakwood, Ill., driver was determined to end the night in victory lane.

And he did just that. Overtaking polesitter Tanner English of Benton, Ky., on the second circuit, Pierce dominated the remaining distance in Saturday’s 50-lap main event, outrunning Mike Marlar of Winfield, Tenn., to earn a $7,500 payday in his first Summer Nationals victory of 2019.

“It was an emotional victory,” Pierce said after the race. “It’s a long time coming. This Summer Nationals series is tough right now, especially when you’ve got guys like (Mike) Marlar dropping in tonight. I seen him there on that (lap-32) caution and it made me pretty worried going into the first corner. Down the backstretch he was right beside me.

“I didn’t know what he was going to do, if he was going to slide me or what. I got ready for it but he stayed on the bottom. I seen my dad giving me wider, wider and wider, gaining a big lead. I just had to hit my marks right. It was awesome. That’s exactly how it needs to go every night. We need to qualify good, win our heat race and get a good draw so we can start up front and run our own race.”

Starting outside the front row, Pierce powered around the top side of the racetrack to assume the point early on. While lapped traffic and mid-race cautions would allow English, and then Marlar, to briefly gain some ground, Pierce was still able to use the high side to his advantage, finishing 1.768 seconds ahead of Marlar at the checkered flag. He said he likes running on racetracks that have a bit of character.

“It was pretty tricky,” Pierce said. “First off, going in (turn) one, you’ve got that tire up on the top kind of staring at you. That kind of dirt mound. You don’t want to hit that. Then there was two holes right after that. I was trying to carry my speed in there as much as I could and just miss them. A couple of times I knew I was going to hit them and I turned right and it looked like I was going to hit the wall. It was just trying not to have the J-bar knocking out.”

Marlar finished runner-up, with fifth-starting Gordy Gundaker of St. Charles, Mo., running third. Sixth-starting Brian Shirley of Chatham, Ill., finished fourth, with eighth-starting Shannon Babb of Moweaqua, Ill., rounding out the top five. After leading and running second for much of the distance, English stopped on the frontstretch to draw a lap-32 caution, retiring to the pits to record a 17th-place finish.

After winning Thursday’s Lucas Oil Late Model Dirt Series event at Portsmouth (Ohio) Raceway Park and finishing sixth on Friday at Tyler County Speedway in Middlebourne, W.Va., Marlar made the roughly eight-hour journey to Fayette County on Saturday afternoon. While an early slip over the turn-four berm would force him to the low groove for the remainder of the race, he still came away with a solid finish after a long day on the road.

“I guess I hit the cushion on lap four or five, whenever I first got up there, and spun on the rim, so it was shaking real bad,” Marlar said. “It committed me to the bottom the rest of the race. I run the outside a little bit, but I couldn’t wheel spin enough without shaking reel bad. But hey, we made it. We had a long day today. We got here and had to fix everything from last night and got the race in. So it was a fun day.”

“I just didn’t have as much dig as I would like,” Gundaker said of Saturday’s run. “The car was still really good. I just had to find my way through (turns) one and two. That hole was really killing me down there. I know I was way off the ground a couple of times. But all in all, it was a great night. Come home third, another good run for us. It was a great weekend really.”

Notes: With his victory, Pierce takes the Summer Nationals points lead from Brian Shirley. … Pierce scored his first Summer Nationals victory since July 14, 2017, at Oakshade Raceway in Wauseon, Ohio. … The race was slowed by two cautions. … The first yellow flag flew on lap 16 when Michael Kloos slowed off the pace. … Third-running Tanner English came to a stop on the frontstretch to draw a caution on lap 32.

Powering ahead of fellow front-row starter Paul Stubber down the backstrech, outside polesitter Michael Kloos took an early lead. A yellow flag waved on the second lap when third-running Daniel Jacober spun in turns one and two, collecting Rusty Griffaw and Dewayne Keifer. Another yellow flag waved on the third lap when Jason Feger and Brent McKinnon spun in turns one and two while battling for position among frontrunners; electing to take a series provisional to start the feature, Feger retired to the pit area. Kloos pulled away on the restart, with second-running Paul Stubber falling back to fourth after contact with Trent Workman. Holding nearly a straightaway lead, Kloos won the consolation, with seventh-starting Jeff Herzog running second. Jacober took the third and final transfer spot.

Rolling around the high side, second-starting Frank Heckenast Jr. led the opening lap, fending off polesitter Tanner English in the early running. Working the low groove, English pulled ahead out of turn four to take the lead on lap five. With Brian Shirley closing in on the race leaders just past halfway, the top three cars distanced themselves from the rest of the field. Extending his lead int he final circuits, English won the heat, with Shirley overtaking Heckenast on lap nine to run second.

Shutting down Shannon Babb’s turn-two challenge, polesitter Bobby Pierce nosed ahead out of turn four to take an early lead. It was a tight battle for third at the halfway mark, as Gordy Gundaker and Tim Manville raced door-to-door, with Billy Moyer in tow. As Babb started fading, Gundaker challenged for second, assuming the position on lap nine. Dominating late-race, Pierce won the heat, with Gundaker running second and Babb finishing third.

Polesitter Mike Marlar charged to the front of the field at the drop of the green flag, stretching his lead in the early running. Adam Tischhauser and Rick Salter raced side-by-side for second through the first half of the race, as Chad Zobrist overtook Paul Stubber for fourth on the fifth lap. Zobrist’s charged continued late-race, as he moved to third on lap eight. Holding a half straightaway lead, Marlar won the heat, with Salter and Zobrist rounding out the podium.

Tripping the clock with a time of 13.217 seconds, Bobby Pierce of Oakwood, Ill., was Saturday’s overall fast qualifier at Fayette County. He will start on the pole of the second heat race. Clocking fast time in their respective time trial groups, Mike Marlar of Winfield, Tenn., and Tanner English of Benton, Ky., join Pierce as heat race polesitters.

Brian Shirley of Chatham, Ill., was the winner of last year’s Summer Nationals stop at the fairgrounds oval. Among surprise entrants at Fayette County is Mike Marlar of Winfield, Tenn., who made the seven-hour journey to Illinois after winning Friday’s Lucas Oil Series event at Portsmouth (Ohio) Raceway Park and running sixth on Saturday at Tyler County Speedway in Middlebourne, W.Va.

Saturday’s program will include hot laps, time trials, three heat races (top five transfer), one consolation (top three transfer) and the 50-lap feature event. Modified and B-mods are among the four other divisions that will be in action.