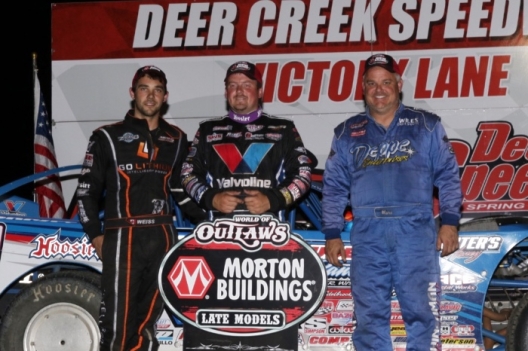 But winning the 40th annual Bigelow Homes Gopher 50 was far from simple for the 26-year-old star from New Berlin, Ill., who started from the pole position but didn’t grab the lead until the 35th lap and had to fend off a furious late-race challenge from Ricky Weiss of Headingley, Manitoba, to secure his third straight and 11th overall triumph of the national tour’s 2019 campaign.

The $10,000 checkered flag at the Queensland family’s racy 3/8-mile oval left Sheppard with a sense of accomplishment.

“This racetrack is just phenomenal,” said Sheppard, who captured his first-ever victory at Deer Creek. “Every time I come here the racing’s just all over the place. The line changes so much throughout the race it kind of throws you for a curveball, and when you’re leading you don’t really know where to go because you can’t judge off anybody.”

Indeed, Sheppard very nearly saw his WoO win streak end at two. After getting outgunned for the lead at the initial green flag by front-row mate Shane Clanton of Zebulon, Ga., and falling back as far as third during the race’s first half, Sheppard steered his Rocket Chassis house car past Clanton to assume command on lap 35. He was never headed thereafter, but the 30-year-old Weiss was inside Sheppard bidding for the lead on lap 46 when the race's fifth and final caution flag was displayed.

That reprieve from Weiss’s pressure proved decisive for Sheppard. He shot ahead of Weiss on the ensuing restart and wasn’t seriously threatened over the final four circuits by the Canadian, who settled for runner-up money in his Bloomquist Race Car, 0.812 of a second behind Sheppard, as his chase of a career-first WoO win continued in his rookie season on the series.

Jimmy Mars, 47, of Menomonie, Wis., slipped past six-time Deer Creek WoO winner Darrell Lanigan of Union, Ky., for third place on lap 48 and finished in the show position driving his MB Customs machine. Lanigan settled for a fourth-place finish in his Club 29 mount while fourth-starter Chase Junghans of Manhattan, Kan., picked up one spot following the lap-46 restart to compete the top five in his XR1 Rocket.

Clanton faded to a sixth-place finish in his Greg Bruening-owned Capital Race Car after leading laps 1-34.

Sheppard appeared eminently beatable after Clanton powered ahead of him for the lead at the start of the feature and Mars slid by him on lap 17 to seize second place. But B-Shepp is seemingly never out of a race, which he proved as he regained second from Mars on lap 25 and then shot by Clanton for the top spot on lap 35.

The move into the lead came after Sheppard opted to take the inside lane for a Delaware double-file restart on lap 33.

“I got beat on the restart on the top, so I was thinking I wanted to start on the bottom,” Sheppard said. “(Crew chief) Dan (White) was telling me to go to the bottom too, so that just reassured me of where I wanted to go. Then I got a good run on the bottom there, hit that little strip of brown coming off of (turn) four, and Shane was up a little bit in that black and I kind of got to his quarter-panel and that was what gave me the momentum to get by him.”

Sheppard didn’t waltz off to a runaway victory, however. Weiss, who started ninth, made sure of that after he slipped past Clanton for second on lap 36 and a few short circuits later was in position to challenge for the lead.

“When I finally got the lead there from Shane, I was kind of running the line I thought I needed to be in, where I thought I was gaining time off of where he was running anyway,” Sheppard related. “And then Ricky kept showing me a nose getting into three there. I knew I wasn’t doing good through one and two and that’s where he was getting a run on me at.”

Weiss came close to nipping Sheppard at the start-finish line on lap 43. He was fully inside of Sheppard again rounding turns three and four on lap 46 when fellow WoO rookie Cade Dillard of Robeline, La., slowed to draw a caution flag, giving the pacesetter the break he needed.

“Dan kept trying to get me to slow down, slow down, slow down, but I just didn’t feel like … I just couldn’t get comfortable there before that caution (on lap 46) come out,” Sheppard said. “Finally, when that caution did come out, I slowed down in (turns) one and two and I felt like that was a lot better. I think that’s what Dan was trying to get me to do that whole time, but it’s hard to see here out on the racetrack where he was standing.”

There was no doubt that the caution flag for Dillard effectively dive-bombed Weiss’s hopes for his elusive first WoO triumph. He felt he was coming on strong before the slowdown.

“We were real good middle to the end of that race,” said Weiss, who registered his second WoO runner-up finish of 2019. “I couldn’t really run up top as good as them so I knew I was kind of committed to the middle, and the more I ran it the deeper I could drive in. And once the tires fired and stuff, it felt even better.

“I saw Brandon try to go down there (to run the inside) and we seemed to be a little straighter. He’d have to bend it and couldn’t come off the corner just as good. He cut me off one time and took the air off the nose and I fell back a little bit, but I looked up and there was eight laps to go so I knew we had lots of time. I was just patiently working my way back up there, working it back up there, and then, just when I went to pull the trigger, the caution comes out.”

Weiss was disappointed to fall short once again in WoO competition, but he took solace in the fact that he knocked on the door to victory lane again.

“Hopefully we can get some of that luck on our side,” Weiss said. “We had to pull out the backup car (because) we had some issues unloading the other one. It wasn’t our gameplan to run this one, but it seemed to work just as good as the other one.”

Sheppard was aware that keeping Weiss from breaking into the WoO winner’s column is becoming ever more difficult.

“Great job to Ricky and them guys,” Sheppard said. “It’s tough out here. We’ve been fortunate enough to win quite a few of these, but it’s definitely not been easy. Them (Weiss) guys have been right there the whole time and they’re gonna get some wins as long as they keep it up front like they have been doing.”

Mars, meanwhile, thought he might have had a shot at finishing better than third if not for an early scrape with Sheppard.

“Getting up to the top there (while racing for second) I thought I had Brandon cleared and squeezed him a little bit and then my quarter-panel got in my tire (from slight contact with Sheppard),” said Mars, whose only previous WoO starts this season resulted in finishes of 10th and second on April 5-6 at Farmer City (Ill.) Raceway. “When I got it pulled back out (during a caution period) then it was good again. It was just grinding into the tire … that was just my fault.

“The car was good. I just made that mistake there. I guess we still got a top three out of it so we’ll take it.”

Dillard was involved in two of the five caution flags that slowed the race, including a lap-two tangle in turn one with Jake Timm of Winona, Minn. Other cautions flew on laps 22 and 33 for Tyler Bruening of Decorah, Iowa (first a flat tire and the mechanical trouble) and lap 36 for Jason Rauen of Farley, Iowa.

Notes: Sheppard’s 11th win in 19 WoO starts kept him on pace to shatter his own single-season WoO victory record of 18 established during his championship 2017 season. He has 24 races left on the ’19 schedule to collect the eight triumphs necessary to set a new benchmark. … Fourth-place finisher Lanigan’s most recent of his record six WoO wins at Deer Creek came in 2015. … John Kaanta of Elk Mount, Wis., authored a noteworthy run, advancing from the 19th starting spot to finish seventh and collect the $500 WoO Bonus Bucks cash for being the highest-finishing driver who isn’t a series regular and hasn’t won a tour A-main. … Chad Simpson of Mt. Vernon, Iowa, started third in the feature but steadily slid backward to finish 11th. … The WoO tour visited Deer Creek for the 17th time. ... The WoO Wild West Tour resumes July 9 at ABC Raceway in Ashland, Wis.