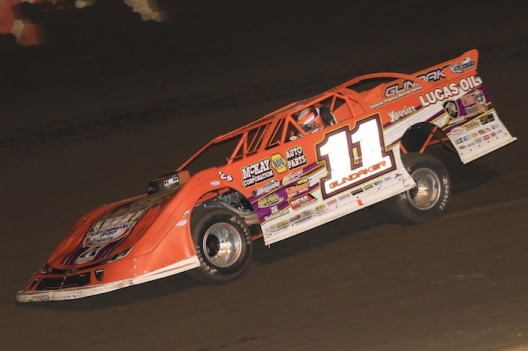 Using momentum from a late-race start, Gundaker raced door-to-door with Babb through the final circuits, overtaking the race-long leader for the first time on lap 41 of 50. With Babb regaining the advantage in the lead-swapping battle with just three laps remaining in the distance, Gundaker powered around the bottom grove, sliding ahead out of turn four to take the checkered flag for the second straight night.

“I can’t even believe this,” Gundaker said. “I could see Chuck (Hummer) up in front of us and I thought, ‘Man, no way is this going to happen.’ I thought when we were going to get to him I wasn’t going to be able to clear him. I got a great run coming off of (turn) two and I thought, ‘To hell with it, we’ve got to go for it.’ I drove across there as hard as I could. I don’t think I lifted. You don’t get many opportunities at this stuff.

“Me and Shannon raced so clean there. We raced so hard. Beating a guy like that … Shannon Babb is one of the best Summer Nationals racers, one of the best racers ever. I idolized him growing up. To slide him for the win means the world to me. I can’t say enough about this team. This is unreal.”

Starting outside the front row, Gundaker fell back to fourth in the early running, reeling in second-running Bobby Pierce of Oakwood, Ill., when the race’s first caution fell on lap 37. Rolling around the inside of the racetrack, Gundaker overtook Pierce for second on the restart, putting himself in a good position to challenge Babb at the front of the field.

It was a tight race to the finish between Gundaker and Babb, with Pierce running a close third through the final laps. Edging Babb by just 0.147 seconds at the finish line, Gundaker notched his third career Summer Nationals victory, his first series triumph at Farmer City.

“We were racing our asses off. That’s the best way to put it,” Gundaker said. “I just found something good there on the bottom and was just digging as hard as I could. I could hear Shannon. He’s always turning his motor as much as he can. I just kept trying to hit my marks. I missed it one time there about three or four to go and I thought, ‘Man, I just gave it up.’ I made one really, really good corner and got back to him.”

After leading more than half of the distance, Babb finished a narrow runner-up, with Pierce running third. Brian Shirley of Chatham, Ill., finished fourth, with Kent Robinson of Bloomington, Ind., rounding out the top five.

Starting on the pole, Babb shot to the front of the field at the drop of the green flag, fighting back early challenges from Pierce. But for the second straight night, lapped traffic would be Babb’s demise, slowing his pace out front as Gundaker charged around the bottom and slid ahead on the final lap.

“When we approached that lapped car, I was hoping I was going to be able to get by him on the outside,” Babb said. “Gordy was able to get under me and pick me off there. He did the perfect job. That’s what he needed to do. We were just a little too snug to get under the lapped car and run the bottom like that. I wasn’t going to give the top away. … I just gave it all I had on the top and just didn’t have enough. He was hooked up right there on the bottom and got by me.”

Challenging Babb through the early running, it was the lap-37 caution that slowed Pierce’s charge. While he was running a strong second before eventually falling to Gundaker, he was never able to make the pass for the lead.

“It was a fun race,” Pierce said. “Just wish that caution wouldn’t have came out when (Myles) Moos spun. I had Babb set up. But that’s the way it goes. … I wish I could have got around Babb. Not that he was slow, because he was really fast. I felt like we were just a tick better. When you get behind cars and you’ve got that dirty air, it’s hard let alone stay with them, but to pass them is super tough. That one time I had him set up an that caution came out. Eventually we’ll get some luck on our side.”

Notes: Gundaker notched his third career Summer Nationals victory. … The first yellow flag waved on lap 37 when Myles Moos spun in turns three and four, tagging Paul Stubber and Jason Feger. … Spinning in turns one and two when Brian Shirley made contact with his No. 7R, fourth-running Kent Robinson drew a caution on lap 40; he was allowed to maintain his position. … Series director Sam Driggers announced during Friday’s drivers meeting that to avoid confusion like that of Thursday at Macon Speedway, two rules would be enforced moving forward. First, with five or less laps remaining in a feature event, restarts will be single-file. Second, when the race leader takes the checkered flag, the race is over.

Polesitter Jason Feger shot to the front of the field at the drop of the green flag, stretching his lead in the early running. Allen Weisser was on the move early, advancing from the rear of the field to run sixth at the halfway mark. As the top two cars distanced themselves from the field, Weisser continued his move to the front, challenging fourth-running Paul Stubber on lap eight. Dominating the 10-lap distance, Feger won the consolation, with David Jaeger finishing second. With Billy Hough falling back late-race, Stubber grabbed the third and final feature transfer spot.

Front-row starters Gordy Gundaker and Kevin Weaver raced almost side-by-side on the opening lap, the advantage going to Gundaker at the stripe. With Gundaker holding a solid lead at the halfway mark, Billy Moyer attempted to reel in third-running Ryan Unzicker. A yellow flag waved on lap eight when Paul Stubber spun in turns three and four. Unchallenged after the first lap, Gundaker won the heat, with Weaver holding off a charging Unzicker in the final laps to finish second.

Rolling around the outside, second-starting Donny Walden edged ahead of Shannon Babb out of turn four to take an early lead. Moving to the outside lane, Babb nosed ahead of Walden at the line to lead lap four. A red flag fell just as the fourth lap was completed when McKay Wenger rolled his No. 42 in turn one; he climbed from the car apparently uninjured. Babb stretched his lead on the restart, with Rodney Melvin overtaking Walden for second on lap six. A yellow flag flew on lap eight when Mike Glasscock came to a stop in turn two. Babb won the heat, with Melvin fighting back Walden to finish runner-up.

The race was brought to a complete restart after three laps completed because the yellow caution light was left on. Polesitter Bobby Pierce shot to the lead when the race was restarted, with third-starting Kent Robinson in tow. Fifth-starting Brian Shirley was on the move early, running third on lap three. Shirley squeezed past Robinson for second on the seventh lap when Robinson slipped over the berm on the backstretch. Holding a comfortable lead, Pierce won the heat, with Shirley and Robinson rounding out the podium.

Tripping the clock with a time of 12.567 seconds, Bobby Pierce of Oakwood, Ill., was Friday’s overall fast qualifier at Farmer City. He’ll start on the pole of the night’s first heat race. Clocking the quickest time in their respective time trial groups, Shannon Babb of Moweaqua, Ill., and Gordy Gundaker of St. Charles, Mo., join Pierce as heat race polesitters.

Friday’s program will include hot laps, time trials, preliminary races and the 50-lap feature event. Along with the Summit Modified Nationals, Crate Late Models and street stocks will also be in action.