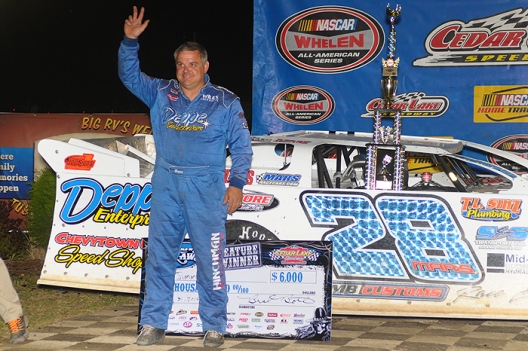 NEW RICHMOND, Wis. (July 31) — With two of the sport's hottest drivers behind him Thursday at Cedar Lake Speedway, Jimmy Mars expected one if not both of his challengers to attempt to charge by him in the World of Outlaws Late Model Series race.

That never happened. Instead, Mars of Menomonie, Wis., led all 40 laps, topping Darrell Lanigan of Union, Ky., and Jimmy Owens of Newport, Tenn., for a $6,000 victory on the opening night of Cedar Lake's USA Nationals weekend.

"Overall it was good," said Mars, who started from the pole and maintained a slight advantage over Lanigan for the entire distance of the caution-free race. "We've got a pretty good hot rod, but the guys that were behind me, you just wonder if they're going to light the fuse and take off. But we were able to hold them off."

The 42-year-old Mars claimed his second WoO victory of the season in beating Lanigan, the two-time series champion and current points leader, to the finish by 0.477 seconds.

Owens, who has combined with Lanigan to claim the lion's share of 2014’s national touring events, charged from 10th to take third late in the race but wasn't close enough to the two leaders to make a serious bid for the win. Former WoO champion Rick Eckert of York, Pa., was fourth with Don O'Neal of Martinsville, Ind., rounding out the top five.

Along with earning his second WoO victory of the season, the opening night triumph also gave Mars a boost of momentum heading into the 27th annual USA Nationals the rest of the weekend. Mars, a two-time winner of Cedar Lake's crown jewel event, will now look for some good fortune as the $50,000-to-win event kicks off with preliminary action on Friday leading into Saturday's 100-lap main event.

“This whole thing, you still need a lot of luck," said Mars, who last won the USA Nationals in 2009. "I always got luck, I just don't have a whole lot of good luck. We'll just see what happens tomorrow night. We take it one step at time.”

Lanigan, who leads the WoO with 11 victories this season, pressured Mars for much of the distance, especially as the two leaders raced through slower traffic in the second half of the race. Although he never found a way to take his Gotta Race-sponsored Club 29 Race Car around Mars, he too has an eye toward a potential big payday on Saturday.

"We had a great race car. We started fifth, but just couldn't get by him," said Lanigan, who won the USA Nationals in 2012. "I think the track conditions will be pretty similar on Saturday, so we should be able to take this package and tweak on it a little bit and be good."

Owens, who drives a Mike Reese-owned Club 29 car designed by Lanigan, was one of the fastest cars on the racetrack as he charged from his 10th starting spot to third by lap 30. But without a caution, he wasn't able to catch Mars and Lanigan and had to settle for a third-place finish and some extra momentum for the remainder of the weekend.

"I was looking forward (to a caution) as soon as we got into third there," said Owens, who's gunning for his first USA Nationals trophy. "I don't know if a caution would've helped us or not, but we had a really good car to get to where we were.

"We worked on some stuff and qualified with a different deal. Maybe we learned a few things for qualifying and the heat race tomorrow, but for the most part I think we've got a decent feature race setup for Saturday.”

Jimmy Mars will start from the pole position in the 40-lap feature with Brian Shirley alongside. The red-hot Darrell Lanigan will take the green flag from fifth. … Scott Bloomquist grabbed the second and final transfer spot in the second B-Main after finally slipping past Morgan Zeigler on the inside of the track with three laps remaining, leaving the sizzling Zeigler out of the headliner. … New Mexico driver Garrett Alberson left a trail of moisture on the backstretch when he retired from the first B-Main. … WoO points provisional went to Eric Wells and Chub Frank, while Shane Clanton and Clint Smith will use WoO emergency provisionals (forfeiting start money). … At 9:45 p.m. CT, the 25-lap NASCAR Midwest Modified feature took the green flag. The Late Model A-Main will follow.

Brian Shirley had an anxious moment on lap three when he bobbled on the cushion in turn two, but he maintained control to complete a flag-to-flag victory. Brady Smith finished a couple car lengths behind in second place while Tim McCreadie was a distant third. The first caution flag of the prelims flew on lap three when Jeff Provenzino spun between turns three and four and then headed to the pit area with damage to his car’s nose.

Gregg Satterlee set sail from the outside pole and led the prelim from flag-to-flag, flying around the outside groove the entire distance. “I think we got the car pretty good,” said Satterlee. Jimmy Owens ran the inside groove and closed the gap in the final laps but settled for second. Chad Simpson, who rubbed doors with Owens between turns three and four on lap three, held on to finish third over the red-hot Mason Zeigler.

Another non-stop prelim saw Billy Moyer control the action from start-to-finish, beating Steve Francis to the finish line by nearly a full straightaway. Shannon Babb, who lost second place to Francis on lap two, settled for third at the finish.

Jimmy Mars dominated the action, leading from flag-to-flag without a challenge. “The car felt good,” said Mars, who beat Bobby Pierce to the finish line by a full straightaway. “We’ll just see what happens in the feature.” A.J. Diemel finished third after slipping past Dennis Erb Jr. on the inside of turn two on lap five.

Darrell Lanigan led the entire 10-lap distance, but Rick Eckert drew close on the final lap to make things interesting. Jason Feger finished a few car lengths behind the leaders in third after starting on the outside pole. Jonathan Davenport finished a half-straightaway back in fourth, missing a transfer spot.

Darrell Lanigan of Union, Ky., continued to shine on the World of Outlaws Late Model Series, storming to the overall fastest lap in split-group qualifying with a clocking of 13.739 seconds in Group 1. He will start from the pole position in Heat 1.

Chad Simpson of Mt. Vernon, Iowa, was fastest in Group 2 with a lap of 14.006 second to earn the pole for the fourth heat.

Other polesitters will be Jimmy Mars of Menomonie, wis., Billy Moyer of Batesville, Ark., Brian Shirley of Chatham, Ill., and Don O’Neal of Martinsville, Ind.

Officials have corrected the apparent weight disqualification of Menomonie, Wis.'s Jimmy Mars, who was initially stripped of his second-fastest qualifying time in Group 1. It was announced that Mars an error was made and Mars did not weigh in light, giving him the pole in the second heat.

A field of 53 cars has signed in for the evening's action, which will split the time trials into two groups. Drivers in Group 1 will compete for starting spots in Heats 1-3, while those in Group 2 will battle for starting spots in Heats 4-6. The top-three finishers in each 10-lap heat will transfer (winners redraw for top six startins spot in the feature), while three 12-lap B-Mains will each move two more drivers to the headliner. ... Darrell Lanigan of Union, Ky., who won the 2012 USA Nationals, enters the weekend as the dominant force of the 2014 WoO campaign. He is the tour’s runaway points leader and has recorded 10 of his 11 wins this season over the past 16 races, including his latest score on Tuesday night at Shawano (Wis.) Speedway. Since earning his second win of ’14 on May 2 at Fayetteville (N.C.) Motor Speedway, he hasn’t gone consecutive WoO features without a victory. … The tire rule for this weekend’s action is Hoosier WRS2-55, LM-40 and 1600 (no white-dot) compounds. … Davey Johnson of Latrobe, Pa., who won the 2000 USA Nationals driving the Rocket Chassis house car, is on hand looking to make his first feature start in the event since a 10th-place finish in 2004. … Joining Lanigan and Johnson as former USA Nationals winners in this weekend’s field are Billy Moyer of Batesville, Ark., Scott Bloomquist of Mooresburg, Tenn., Jimmy Mars of Menomonie, Wis., Rick Eckert of York, Pa., Brian Birkhofer of Muscatine, Iowa, and Tim McCreadie of Watertown, N.Y. … Brandon Overton of Appling, Ga., is in the pit area ready to make his first-ever appearance at Cedar Lake behind the wheel of Troy Baird’s machine. ... Many of the drivers in action this weekend receive tow money courtesy the Fans Fund, which is financed by donations from Cedar Lake fans and spectators. This year Fans Fund drivers will race for their share of the money in a $2,500-to-win dash on Friday paying $1,200-to-start. ... Cedar Lake, which hosts hundreds of campers during the weekend, has added a shuttle to help fans get around the grounds.

A complete Thursday-night racing card has become a traditional lead-in to Cedar Lake’s USA Nationals — which includes time trials and heats on Friday night and last-chance events and the $50,000-to-win 100-lapper on Saturday evening — but this is just the second year that the preliminary carries WoO sanctioning. Brandon Sheppard of New Berlin, Ill., was the winner of last year’s Thursday-night WoO show.

Thursday’s action, which also includes racing for the NASCAR Midwest Modifieds, is scheduled to start with hot laps at 6 p.m. CT. Time trials will follow at 6:30 p.m. and opening ceremonies are set for 7:30 p.m.