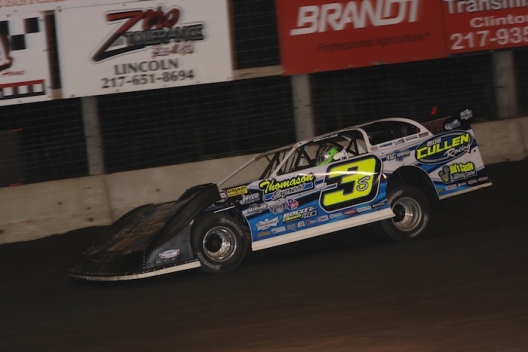 With heavy rain starting to fall with 16 laps completed at about 9:25 p.m., officials were forced to cancel the remainder of the evening’s program. No makeup date was immediately announced for the $5,000-to-win event. Brian Shirley of Chatham, Ill., was the race leader when cars were sent back to the pit area four laps shy of the halfway mark that would've made the race official.

Polesitter Jeff Roth took an early lead, fighting back third-starting Rusty Griffaw when Phil Taylor spun in turn two to draw a caution on the third lap. Another yellow flag waved on lap five when Dewayne Keifer slowed on the frontstretch. After starting 11th, Brent McKinnon had advanced to run in fourth when the caution fell. Roth held his lead on the restart, with Griffaw attempting to reel in the race leader. With Griffaw unable to close the gap, Roth won the consolation. Mark Burgtorf overtook Joe Godsey on the final circuit to run third and transfer to the feature.

Polesitter Billy Moyer shot to the front of the field at the drop of the green flag, with fellow front-row starter Shannon Babb quickly closing the gap between himself and the race leader after losing ground on the start. Dennis Erb Jr. was on the move early, advancing from sixth to run in third by the halfway mark. The white flag waving, Babb pulled alongside Moyer in turn four but was unable to make the pass for the lead, finishing runner-up at the checkers.

Despite Brandon Sheppard’s attempt to move to the top side in turn two, outside polesitter Brian Shirley edged ahead to take an early lead. As second-running Sheppard continued to work on Shirley at the halfway point, it was a close battle for second between Kyle Bronson and Frank Heckenast Jr. Holding off Sheppard, Shirley won the heat, with Bronson outdueling Heckenast to finish third.

Outside polesitter Jason Feger nosed ahead of fellow front-row starter Tanner English to lead the opening lap, the pair running nearly side-by-side through the first few circuits. The top two cars distancing themselves from the field at the halfway mark, English continued to run a close second to Feger, unable to make a pass for the lead in lapped traffic. Feger picked up the heat race win, with English and Mike Glasscock rounding out the podium.

Tripping the clock with a time of 13.303 seconds, Brandon Sheppard of New Berlin, Ill., was Sunday’s overall fast qualifier. He’ll start on the pole of the evening’s second heat race. Quickest in their respective time trial groups, Tanner English of Benton, Ky., and Billy Moyer of Batesville, Ark., are also heat race polesitters.

The DIRTcar Summer Nationals moves to Lincoln (Ill.) Speedway on Sunday for a $5,000-to-win event. The quarter-mile oval, located at the Logan County Fairgrounds, hosts Hell Tour competitors for the 13th time in series history.

Shannon Babb of Moweaqua, Ill., scored his first Summer Nationals victory of 2019 on Saturday at Highland (Ill.) Speedway. His lone series victory at Lincoln comes back in 2005. Winning at Lincoln most recently in 2017, Brandon Sheppard of New Berlin, Ill., has a series-leading three victories at the fairgrounds oval.

Sunday’s program will include hot laps, group time trials, preliminary races and the 40-lap main event. Modified and POWRi midgets will also be in action.