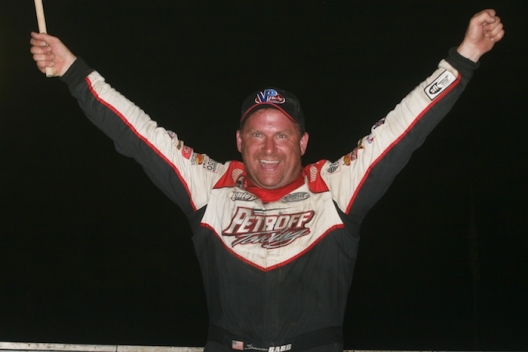 HIGHLAND, Ill. — Admittedly, Shannon Babb’s 2019 DIRTcar Summer Nationals campaign did not start out as well as he would have hoped. But the Moweaqua, Ill., driver’s dry spell ended on Saturday night with a $10,000 victory at Highland Speedway.

“I’m definitely tickled to death,” Babb said. “I’m probably hard-headed and stuck it out too long with that other car. It’s a good car, just probably had something wrong. We got this fresh piece out and it was really good. We ran it last night at Terre Haute and it was really good and tonight it was amazing. I’m just happy to be able to get back to victory lane.”

It was a tight battle for the lead in the early running, with front-row starters Brandon Sheppard and Rusty Griffaw of Fetus, Mo., taking turns at the front of the field. Pulling ahead out of turn four to lead the fourth lap, Babb fell to Sheppard on the following circuit. The pair raced nearly side-by-side for a handful of laps, with Babb powering back to the front of the field on lap 18 of 50 en route to his fifth career series victory at Highland.

“With Brandon (Sheppard) starting front-row, outside, I figured he was going to roll around the top,” Babb said. “When I hit that middle, my right-rear tire bit and we went forward. I was like, ‘Wow, I haven’t felt that in a while.’ It was really good. We were able to get by him. I probably made a mistake, went to the top and let Brandon get back by me. I just told myself, ‘I’ve got to slow down and drive this place like you normally have to.’ Low and slow around the tires down there is what usually wins the race.”

After a slow start to the evening, Moyer rallied in Saturday’s 50-lap feature, joining Sheppard, Schlenk and Bobby Pierce of Oakwood, Ill., in a mid-race four-car battle for second. While he was able to close the gap between himself and Babb late in the distance, Moyer decided not to attempt a pass for the lead. He was pleased to come away with a runner-up finish.

“He was being very conservative, maybe slowing himself down a little bit,” Moyer said. “When I seen I had a little room from the guy behind me to where I could just approach the corner a little different, I made up a little time. But even if I was right on his bumper, there wouldn’t have been no passing him without being real dirty.

“From where we started, where we buried ourselves qualifying to get to where we was … We threw a bunch of things at the car. We’re just kind of learning this thing, at least in that condition. The last couple of nights, we’ve got a lot of promise going on now finally.”

Schlenk too found himself in a tight race for position, fighting back a charging Feger in the final laps to close the night with a podium finish.

“I knew I had to be perfect there,” Schlenk said. “Jason (Feger) looked like he found something up top there about 10 to go. I kept hearing him up there and then I started seeing him and I’m like, ‘Crap.’ I knew I had to hit my marks. I was actually trying to shove them yuke tires in the last three or four laps. I kept trying to knick them and shove them in. I knew it was going to come down to a race for the line. I finally got them knicked in where I could get a little traction off of four. If it wasn’t for that, I think Jason would have got around me.”

Notes: Babb has a series-leading five career Highland victories. He sits second on the series all-time win list with 98 career Summer Nationals victories. ... Series title contender Bobby Pierce ran as high as second before slipping back and pitting on lap 39; he returned to finish eighth. ... Polesitter Rusty Griffaw led early but faded and retired on lap 14. ... Piloting his family-owned No. B5, Brandon Sheppard led 13 laps early but faded and retired just past halfway with a flat tire. ... Rodney Melvin was sent pitside for retaliating against Gordy Gundaker under a lap-10 caution. … Paul Stubber spun in turns three and four to draw the race’s final caution on lap 40.

A yellow flag waved on the initial start for a backstretch pileup involving Trent Workman, Paul Stubber, Dave Jacober, Jason Zobrist, Mark Oller and Travis Horner. Polesitter Michael Kloos shot to the lead as the race went green, with another yellow flag flying on the first lap for a tangle in turns three and four involving Stubber, Jacober and Workman. Kloos held his lead on the restart, with Rick Salter charging to third on lap three. With Kloos holding a comfortable lead at the halfway mark, Salter attempted to reel in second-running Larson. Using lapped traffic to his advantage, Salter nosed ahead of Larson on the white flag lap, the pair racing side-by-side down the backstretch. Kloos won the consolation, with Larson edging out Salter at the line to run second and transfer to the feature.

With the front-row starters racing side-by-side down the backstretch, outside polesitter Rusty Griffaw pulled ahead out of turn four to lead the first lap. As Highland regulars Chad Zobrist and Mark Voight battled for second, polesitter Rodney Melvin challenged Griffaw for the lead, the top two cars distancing themselves from the field at the halfway mark. With Melvin shooting ahead down the backstretch on the final lap, Griffaw charged back to the front out of turn four to win the heat race.

Rolling around the top side, outside polesitter Tanner English took an early lead, as Brent Larson and Daryn Klein battled for the fourth and final transfer spot. At the halfway mark, English stretched his lead, with Klein charging to join Rusty Schlenk and Gordy Gundaker in the battle for second. English won the heat, with Schlenk running second. Klein edged Gundaker at the line to run third.

Charging ahead down the backstretch when fellow front-row starter Brian Shirley tagged the wall, polesitter Shannon Babb took an early lead. With Shirley powering back to second after his miscue, a yellow flag flew on the third lap when Mark Oller spun in turns one and two. It was a three-car battle for second on the restart, with Tim Manville challenging Shirley and Jason Feger for position. Fending off Shirley, Babb won the heat, with Manville rounding out the podium in third.

As second-starting Bobby Pierce slipped up the track in turn four, polesitter Brandon Sheppard edged ahead to lead the opening lap. It was a three-car battle at the front of field in the early running, as Billy Moyer challenged Pierce for second, the pair running close behind Sheppard. Holding off Pierce, Sheppard won the heat, with Moyer and Frank Heckenast Jr. grabbing feature transfer spots.

After a string of early rainouts, the DIRTcar Summer Nationals moves to Highland (Ill.) Speedway for its fifth consecutive night of action. The quarter-mile oval, located at the Madison County Fairgrounds, hosts Hell Tour competitors for the 16th straight season.

Rocket Chassis house car driver Brandon Sheppard of New Berlin, Ill., was the winner of Friday’s World of Outlaws Morton Building Late Model Series co-sanctioned event at Terre Haute (Ind.) Action Track. He returns to the seat of his family-owned No. B5 on Saturday at Highland.

Saturday’s program will include hot laps, time trials, preliminary races and the 50-lap, $10,000-to-win main event. Modifieds and pro modifieds will also be in action.