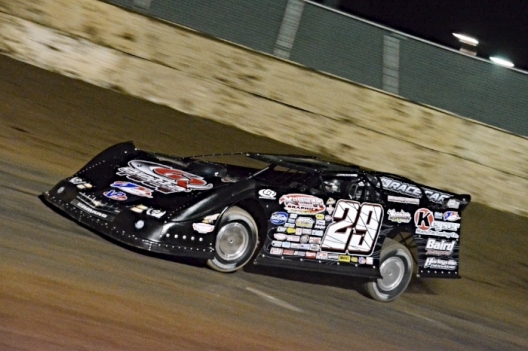 The fourth-starting Lanigan took the lead from outside front-row starter Rick Eckert of York, Pa., amid traffic on the 17th lap and led the remainder of the 50-lap Sun Drop Shootout in the first of three series races in Wisconsin.

It was a two-car breakaway most of the race, but Lanigan crept further away from Eckert in the second half of the race and lapped all but nine competitors in the 24-car field.

“When your car’s that good, it’s not too bad,” Lanigan said of the 43-lap stretch of green-flag racing on the half-mile fairgrounds oval. “The car was just phenomenal out there and would go anywhere we wanted to. Like I said, I can’t thank my crew enough — Jason (Jameson), Adam (Logan), Richie (Davis) — they all do a phenomenal job.”

Eckert finished two seconds back at the finish while seventh-starting Jimmy Mars of Menomonie, Wis., was nearly seven seconds back in third. Tim Fuller of Edwards, N.Y., and Billy Moyer of Batesville, Ark., rounded out the top five finishers on a night when an afternoon shower delayed the beginning of the night’s action.

Polesitter Wendell Wallace of Batesville, Ark., piloting the Illinois-based Moring Motorsports No. 1, started on the pole but slipped to fourth from second on a lap-seven restart following the race’s lone caution for Jason Feger and ended up sixth at the finish.

The 44-year-old Lanigan, who also won at Shawano in 2011 and ’12, led comfortably most of the second half of the race, but Eckert drew closer with about 10 laps remaining when the leader was trying to put Tim McCreadie of Watertown, N.Y., a lap down.

Eckert drew nearly within striking distance, but once Lanigan cleared McCreadie he cruised the rest of the way for his 64th career WoO victory.

Eckert, winless on the series for more than a year and looking for his first series victory since joining the Rocket Chassis house car team in the spring, felt he let one get away at Shawano.

“We had a great race car. That’s the best driving race car I’ve had in a long time. The guys have been working hard,” the 48-year-old Eckert said. "Really, we should’ve beat him. I didn’t get through lapped traffic as quick as I should’ve, so that one’s on me.

“I thank all the fans for coming out and sitting through this rain. I knew that was a pain in the neck for everybody, but it turned out to be a great race, so you got your money’s worth.”

Mars picked his way up to the third spot, improving four positions, but he never caught the frontrunners as the laps clicked off.

“It’d have been interesting maybe if we had something (on a late restart),” Mars said. “I don’t know, the car felt pretty good. Starting seventh … these guys are so good here, it takes a major slipup to pass, and a couple of guys did and we were able to get by 'em.

“Then I was playing catchup the rest of the time. I don’t know what my lap times were compared to (Lanigan and Eckert), but it felt pretty good.

“The way I thought tonight was going to start out with ignition problems there, I thought 'Oh man, this is going to be bad.' But it all worked out good. I won a heat race and got third in the feature, and congratulations to Darrell and Rick, they did a good job. I wish I could’ve been up there battling a little more.”

Mars will make another home-state run with the World of Outlaws regulars starting Thursday at Cedar Lake Speedway in New Richmond, Wis., for a $6,000-to-win tuneup for Friday and Saturday’s 27th annual USA Nationals, which pays a series-high $50,000 to the winner of a 100-lap feature.

Lanigan will be gunning for his second career USA Nationals victory to follow 2012, when he pulled off a Shawano-Cedar Lake double.

Notes: Provisional starter Jonathan Davenport retired with a single lap complete after stripping his car’s rear end gears in preliminaries. … Mason Zeigler of Chalk Hill., Pa., finished seventh after starting 10th on a night when he was tagged with jumping the start from the pole of a heat race, setting him back preliminaries. … A rain shower passed before 5 p.m., delaying the start of the evening's action. ... Shawano hosts a weekly unsanctioned Late Model division with hometown driver Troy Springborn leading the points over Ron Berna, Nick Anvelink and Brett Swedberg, the most recent winner. Swedberg finished 21st in the main event.