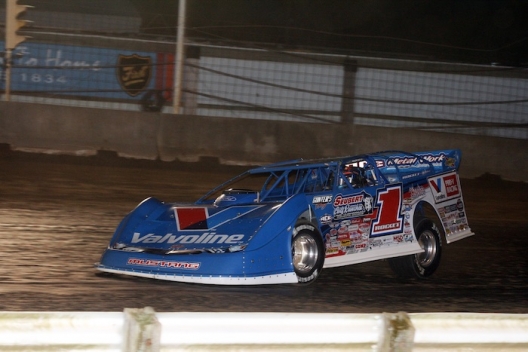 TERRE HAUTE, Ind. — It was a big night for Brandon Sheppard on Friday at Terre Haute Action Track.

Racing on a big track and building a big lead, the New Berlin, Ill., star raced to a big victory, earning $10,000 in a race co-sanctioned by the big brother World of Outlaws Morton Buildings Late Model Series and little brother DIRTcar Summer Nationals.

Sheppard, who has championship trophies from both tours, built leads of more than five seconds in cruising to the co-sanctioned victory, his ninth of the season on the national tour and second of 2019 on the regional tour.

The pole-starting Sheppard took the checkers 2.978 seconds ahead of runner-up Bobby Pierce and thanked the Rocket Chassis house car team for providing yet another capable car.

“This thing’s just awesome. I can’t think my crew enough … they work their butts off on this thing and it’s definitely a dream to drive,” said Sheppard, who is also running away in the WoO points chase. “And (team owner) Mark (Richards) is so good at tuning this thing and using what feedback I have to dial this thing in just right, and he did it again tonight.”

The high-running Pierce, who rallied from his eighth starting spot and was one of four drivers to hold the second position, finished as the runner-up while Darrell Lanigan of Union, Ky., Billy Moyer of Batesville, Ark., and 15th-starting Shannon Babb of Moweaqua, Ill., rounded out the top five in the caution-free 30-lap feature.

Besides Ricky Weiss challenging Sheppard exiting turn two on the second lap, the race was a runaway for the Rocket house car. But those pursuing him had fun mixing it up with Weiss (laps 2-13), Lanigan (lap 1), Moyer (14-25) and then Pierce (26-30) taking turns in the second spot.

“Congrats to Brandon on the win. I’m sure (the lapped cars) were slowing him down there at the end,” Pierce said. “He had such a big lead. I could’ve been a lot faster those last three laps, but I was just off the gas and my Dad gave me a big lead (signal), and I was just satisfied with second. I knew he was so far out there I wasn’t going to catch him unless I really gave it all I had, and everything was already running hot (because) of how iit was, because it was so dusty those first 10 laps.

“It’s heckuva racetrack,” added Pierce, who shaved more points off the Summer Nationals lead of Brian Shirley, who finished sixth. “I always wanted to race here up on the (outside) fence, and finally I got to do it. …. another good points night and I’m finally making some money now, and that’s good.”

The third-finishing Lanigan made his Terre Haute debut and drove it like he’d been there before.

“What a big track. I’ve never been up here, but man, you can really get around this place,” he said. “This place kind of reminds me a little bit of that Selinsgrove (Pa.) Speedway, it’s a big ol’ flat track. But it’s fun to race out here. Like I said, you can race all over this thing, so we had a good night.”

Notes: Sheppard has 46 career WoO victories and 20 with the Summer Nationals …Fourteen drivers finished on the lead lap. … Jason Feger of Bloomington, Ill., had to go to a backup car after time trials when he broke the powerplant in his primary car. … Rusty Schlenk of McClure, Ohio, missed his heat race because of battery problems; he made repairs for the feature, where he finished 15th. … With 22 cars on hand, officials scrapped the consolation race and didn’t need provisionals. … The event was governed by Summer Nationals rules.

Polesitter Brandon Sheppard led all the way in the final heat, turning back an early challenge from Frank Heckenast Jr. and pulling away. Shane Clanton took second from Heckenast on the backstretch of the fourth lap as the pair finished nearly a straightaway behind the winner. The race required four starts. Shannon Babb lost his outside front-row starting spot when he twice jumped the start. He was moved back to fourth and was tagged again with jumping on the third start.

Fast qualifier Ricky Weiss took a half-straightaway lead after two laps and cruised to a eight-lap victory. Weiss ended up taking the checkers 2.217 seconds ahead of runner-up Dennis Erb Jr., who narrowly fought off a last-lap charge by Brian Shirley on the outside. Jason Feger, who went to a backup car after breaking a motor in time trials, was seventh.

Competitors on the big brother World of Outlaws Morton Buildings Late Model Series and little brother DIRTcar Summer Nationals face off Friday night in a co-sanctioned affair with $10,000 on the line.

With the event following the Summer Nationals format, the field will split into three qualifying groups with the drivers time-trialing and heat-racing by group. The heat race finishes will set the feature lineup.