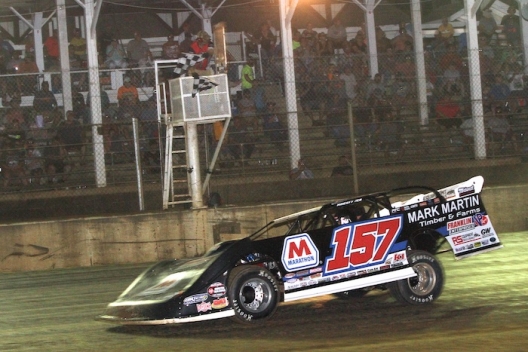 BROWNSTOWN, Ind. — There’s no better way to thank a helpful sponsor than coming into their neck of the woods and grabbing a victory.

And that’s exactly what Mike Marlar of Winfield, Tenn., did Wednesday night at Brownstown Speedway, overtaking Cade Dillard before the halfway point and fending off a late charge from Darrell Lanigan for a $5,000 victory on the DIRTcar Summer Nationals.

“Glad to see them guys out here and it’s awesome to get a good win for ‘em here,” said Marlar, who led the last 24 of 40 laps. “We came up here about a month ago and almost got us one, and Scott (James) smoked me there at the end. So it’s fun to get a win … (the Marathon sponsorship) has really stepped up and done a lot to help get us out racing this year, so I’m glad they came aboard.”

Lanigan’s charge from the 13th starting spot fell eight-tenths of a second short at the checkers, but the Union, Ky., driver nosed in on Marlar a few times late in the race, adding a little drama to the 40-lapper.

In the tour standings, Pierce took a 25-point chunk out of the 57-point lead of Brian Shirley of Chatham, Ill., the winner of four of six races heading to Brownstown. Shirley set fast time and won a heat race, but after starting third he slipped back to fifth early, dropped out of the top 10 at halfway and ended up a lap down in 16th. The two-time and reigning tour champion's worst previous series finish was third.

Making his debut at Brownstown, Dillard jumped into the early lead and cruised the first 10 laps, holding a half-straightaway edge by the time the seventh-starting Marlar wrestled the second spot from James.

Dillard had a 1.2-second lead at that point, but Marlar trimmed it by a tenth of a second per lap until the leader came upon a slower car. Pouncing, Marlar dropped under Dillard and the lapped car of Paul Stubber and took command, pulling away before the race’s lone caution appeared on lap 18 for a slowing Steve Casebolt.

Marlar eased away on the restart as Lanigan, who restarted fourth, took third from Dillard on lap 21 and then snared the second spot from James on lap 23. Marlar held nearly a one-second edge on Lanigan at lap 24, but the pursuer turned up the wick on Marlar, cutting that margin under a half-second with 10 laps remaining.

Lanigan made his most serious bid for the lead entering turn three on the 35th lap, triggering Marlar to settle his No. 157 lower on the track as he hugged the infield the rest of the way. Lanigan slipped up between turns one and two on lap 37, costing him precious time he was never able to make up.

“It was a fun race. Me and (Dillard) was having a really good race there. I’m glad to see … he’s struggling a bit, but he’s been doing a lot better, so hat’s off to him,” Marlar said. “Darrell, there, I knew he’d be coming. He was on (softer tires) and Scott James also, so they were pretty soft on tires, so I figured they’d be in the bottom.”

Marlar’s trip to Indiana isn’t over as last year’s World of Outlaws Morton Buildings Late Model Series plans to stick with the series in a Friday event at the Terre Haute Action Track in a co-sanctioned WoO event.

“I love going to Terre Haute. It’s been one of my favorite tracks for many years,” Marlar said. “I enjoy going there and it’s always fun to come to Brownstown. I’ve gotta a lot of fans and got a pretty big sponsor from here at Brownstown, so it’s fun to get to come up here, and especially to get to win one.”

Notes: Marlar’s previous Summer Nationals victory came July 7, 2017, at Farmer City (Ill.) Raceway; his other three came in 2007 during a full-season tour run. … Marlar led the first 26 laps of 2010’s tour opener at Brownstown but yielded to Billy Moyer on lap 27, finishing second. … Runner-up Darrell Lanigan was going for his second career series victory; his first came 21 years to the day earlier at Bluegrass Speedway in Bardstown, Ky. … Before the main event, drivers briefly helped roll the track surface back in after it was worked during intermission. … The nights of Kent Robinson and Austin Burns ended violently during the B-main when Robinson spun in turn two. The ensuing pileup briefly sent the Burns machine perched on its nose, but it eventually ended up on its wheels and no one was injured. The red-flag cleanup took more than 10 minutes.

Scott James raced to victory in the final heat from his pole position to join the feature redraw Breaking away from a three-wide battle with Steve Casebolt and Nick Hoffman early, Shelby Miles pressured James in second, but Miles lost the spot to Casebolt on the eighth lap. Sixth-starting Jason Feger came alive late and dropped Miles to fourth on the final lap as both transferred ahead of the fifth-finishing Hoffman.

Carrying high-groove momentum on the first lap, Cade Dillard swept into the lead from outside the front row and rolled to victory. Brandon Sheppard followed the high-running Dillard to get second while polesitter Bobby Pierce, who got a bit sideways exiting turn two on the first lap, settled for a distant third, barely holding off Boom Briggs, who got the final transfer spot in the caution-free 10-lapper. Dillard was making his Brownstown debut.

Enduring a difficult Summer Nationals, winningest series driver Billy Moyer got on track by cruising to a victory in the second heat. Fifth-starting Mike Marlar made the middle groove work to go around Rusty Schlenk and then Tanner English, on the last lap, and get second. English and Schlenk got the other transfer spots. Paul Parker started fourth but slipped back to finish fifth.

Polesitter and fast qualifier Brian Shirley cruised to a 10-lap victory while Chase Junghans took second from Devin Gilpin on a lap-seven restart. Gilpin was third and Darrell Lanigan got the final transfer spot. Four yellows slowed the action, lastly for Duane Chamberlain's backstretch spin on a lap-seven restart. Jason Jameson was running fifth when he spun over the banking in turn three and four. Before that, Steve Godsey spun over the turn-one banking on the second lap to draw a caution. Godsey was part of a lap-three caution when Chad Stapleton spun in turn three, collecting Jeff Roth. Stapleton's car was towed to the infield with front-end damage.

DIRTcar Summer Nationals points leader Brian Shirley got off to an impressive start Thursday at Brownstown Speedway by topped a rugged field of 44 cars in time trials. Shirley tripped the clock at 14.342 seconds at the quarter-mile oval to earn the pole position for the first heat.

Oither heat race polesitters — all previous winners at Brownstown, like Shirley — are Billy Moyer of Batesville, Ark., Bobby Pierce of Oakwood, Ill., and Scott James of Bright, Ind. The top four from each heat transfer to the main event.

Brownstown Speedway becomes the first non-Illinois to host the DIRTcar Summer Nationals as the rain-plagued tour moves to the quarter-mile Indiana oval where plenty of Hoosier drivers will try to deny the tour’s Illinois counterparts.

Brian Shirley of Chatham, Ill. — a 2008 series winner at Brownstown — leads the series into its seventh event with four victories in six starts, including Wednesday’s flag-to-flag $5,000 victory at Peoria Speedway.

Title contenders Bobby Pierce and Frank Heckenast Jr. will be among drivers trying to stop him along with a rugged group of non-series regulars led by Mike Marlar, Kent Robinson, Steve Casebolt, Scott James and Devin Gilpin.