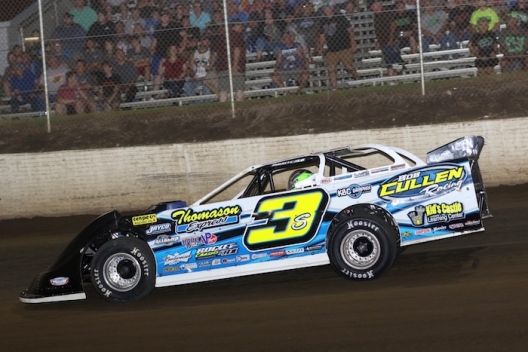 Instead of night-by-night, it appears the 38-year-old Chatham, Ill., racer is taking the series victory-by-victory.

Continuing to collect checkered flags across the Midwest, Shirley added another trophy and winner’s check on Wednesday at Peoria Speedway, leading all 40 laps at the quarter-mile oval for a $5,000 payday that gives him four victories in six completed events on the rain-plagued tour.

With a $25,000 champion’s check looming, Shirley’s decision of racing toward his third series championship or heading elsewhere appears more and more likely.

“Our deal here was just, we’re going to run ‘em up until about the third week, then we’ll work to work we’re at, and then we’ll evaluate the season and what we’ve got left,” said Shirley, who has two third-place finishes besides his four victories. “It’s just a lot of racing, there’s a lot of racing, and you know we’ve gotta a lot of races the rest of the year. We’ve probably already ran 50 nights, and we’ve got another 50 to go.

“We’ll just see how it goes and take it night-by-night, like I said, I can’t thank everybody enough, all the fans, all the people that are behind me. It’s just been a heckuva ride.”

Shirley fended off challenges by runner-up Bobby Pierce of Oakwood, Ill., to win by nearly three-tenths of a second at the checkers on a track surface that forced most drivers to the low groove in the second half of the race.

With his victory, Shirley continued climbing the tour’s all-time wins list, adding his 23rd victory to move into a tie for fifth with Pierce and former series champion Rick Aukland of Fargo, N.D. Every driver in the top five except Heckenast are in the top 10 in series victories.

Shirley jumped to the high side at the outset and had no problems early while reaching the tail of the field after just six laps. The race’s lone caution on the seventh circuit for a slowing Allen Murray gave him clear track, and Shirley set sail again with Pierce taking the second spot from Sheppard, then Heckenast dropping Sheppard to fourth three laps later.

By the race’s midpoint, passing was at a premium as cars filtered into the low groove, and Shirley’s half-straightaway lead disappeared with Pierce, Heckenast and others joining a nose-to-tail parade.

After a few tense moments, Shirley cleared a few lapped cars and broke away to build a straightaway margin by lap 28, but another backup developed in the final laps, allowing Pierce to close in again.

Pierce nosed under Shirley a few times in the closing laps, but Shirley kept him in check.

Pierce was ready to pounce, but the opportunity never came.

"I was kind of just hoping he'd make a mistake in the lapped traffic," Pierce said. "But he drove a heckuva a race and just kept it where he needed to and hung on to win."

Notes: The evening’s action was delayed about 45 minutes when persistent sprinkling rain halted the modified feature after seven laps; after the track was reworked, modified cars returned to the track to complete their feature by about 10 p.m., just before the Late Models took the track. … Last year’s Peoria winner Billy Drake wasn’t a factor all night, retiring after 31 laps to finish 21st in the main event. … After a postrace pitside fight between the drivers and crews of Tanner English and Brian Shirley on Tuesday at Tri-City Speedway in Granite City, Ill., series director Sam Driggers read the riot act at Wednesday’s drivers’ meeting, saying anyone else fighting would be sent home (English didn’t attend Peoria). “Do not put your hands on people — stay in your pits!” Driggers said with as much anger as drivers have seen from him.

Lingering rain sprinkles that started just before the modified feature forced the cars off the track after seven laps complete at about 9 p.m. Officials pulled the cars off the track and they sat in line in the pits for 15 minutes before the rain lightened, allowing cars to head to their pits for 10 minutes of work on the cars before returning to the track, which was being worked by pack trucks. Modifieds were called to staging about 9:30 p.m. and returned to the track about 9:40 and racing resumed five minutes later.

Brian Shirley fended off first-lap challenges from Frank Heckenast Jr. and became the third straight winner from the pole. Heckenast ran comfortably in second all 10 laps while Dennis Erb Jr. finished third. Kevin Weaver and Billy Drake had an old-school Illinois battle for fourth with Drake down low (of course) and Weaver up high (of course). Erb barely stayed ahead of the pair with Weaver edging Drake for the fourth spot. For the third straight time, the initial start was called back.

Bobby Pierce raced to victory from the pole, keeping fellow front-row starter Allen Weisser in check early. Sixth-starting Jason Feger got rolling on the high side and advanced to the runner-up spot, transferring in the caution-free prelim along with Weisser, Rusty Schlenk and Walker Arthur. The first start was called back. Most drivers ran the high side in turns one and two and the low groove in three and four.

Polesitter Brandon Sheppard jumped to the early lead and cruised to a 10-lap victory. Myles Moos slipped back early from outside the front row but got rolling on the high side (in turns one and two; he ran low in three and four) to regain second from Shannon Babb and keep Sheppard from running away completely. Moos, Babb and rookie Mike Chasteen picked up transfer spots along with Chase Junghans. A lap-five caution appeared for Paul Stubber's problems on the frontstretch. The first start was called back.

Brandon Sheppard of New Berlin, Ill., topped 26 entrants in Peoria’s time trials, tripping the clock in 12.082 seconds on the quarter-mile layout. He’ll start on the pole of the first heat.

Other heat race polesitters in the three-heat format are three-time series champ Bobby Pierce of Oakwood, Ill., and series points leader Brian Shirley of Chatham, Ill. The top five drivers from each heat transfer to the main event with the winner’s drawing for the top three starting spots. Three drivers from the consolation race and four provisional starters fill the 22-car field.

The DIRTcar Summer Nationals will shoot for its first back-to-back complete events of 2019 Wednesday at Peoria Speedway with a $5,000-to-win feature highlighting the midweek action. Peoria’s event is the makeup of the rained out series opener from two weeks earlier.

The rain-plagued tour had perfect summer weather Tuesday at Tri-City Speedway in Granite City, Ill., and hopes for more during a stretch of scheduled and makeup races with consecutive races set through July 8.

Reigning series champion Brian Shirley of Chatham, Ill., leads tour standings heading to Peoria after three victories in the first five series events. Another tour winner, Brandon Sheppard of New Berlin, Ill., is expected to compete in his family-owned car while Tuesday’s winner Kyle Bronson of Brandon, Fla., ended a three-race stint on the tour with his Tri-City victory.

Among locals expected to challenge series invaders at Peoria are Billy Drake of Bloomington, Ill., who drove his Ray Neltner-owned car to victory in last year’s Summer Nationals event at Peoria, and hometown driver Mike Chasteen Jr., a Super Late Model rookie and six-time winner at Peoria in 2019.