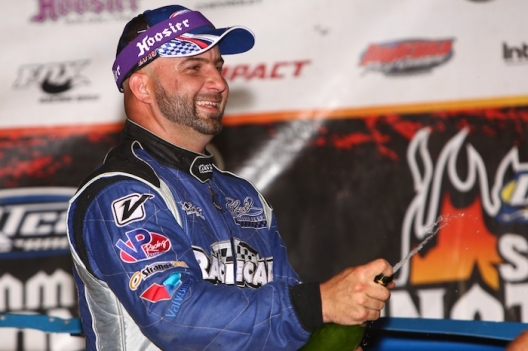 Unhappy with Tyler Erb’s aggressive pass after a lap-three restart Tuesday at Tri-City Speedway, second-running Kyle Bronson charged into turn three on the last lap and sent the leading Erb into the wall between turns three and four, setting up a one-lap dash to the checkers with Erb on the hook.

The 29-year-old Brandon, Fla., driver held off Bobby Pierce of Oakwood, Ill., on the last of 40 laps on a rugged surface to claim the $7,500 victory, the first of his career on the DIRTcar Summer Nationals.

“I hated that for Terbo, you know. We got together and he got into the fence, you know. He’s my best friend here, you know, we go up and down the road all together,” Bronson said in victory lane. “I didn’t want to do that to him, but he put me in the fence, about lap (four), and you know, we just race hard, you know … what you dish out you’ve got coming back.”

While Erb, of New Waverly, Texas, ended up with a wrecked car that placed 10th after briefly climbing the concrete between turns three and four, Pierce ended up in second to match his best series performance of 2019. Tour points leader Brian Shirley of Chatham, Ill., rallied from his 10th-row provisional starting spot to finish third while Brandon Sheppard of New Berlin, Ill., and Rusty Schlenk of McClure, Ohio, rounded out the top five in the makeup event from a Friday rainout.

Bronson, one of Florida’s most successful drivers who is in his second year as a regular on the Lucas Oil Late Model Dirt Series, was gratified to grab his first Summer Nationals victory against a tough field.

“(Fellow Florida driver) Mark Whitener and those guys have been calling me and giving me heck, you know, for letting all them guys down,” Bronson said. “They thought I was kinda soft, but I guess I’m getting my mojo back.”

Erb painted the best picture he could about tussling with his Lucas Oil Series buddy.

“I'm not mad at him. I'm mad at myself,” Erb said. “I did not do a good enough job to not let him do that to me back. You know what I mean? At the end of the day that's what happens and we got a DNF out of the deal.”

Pierce was glad he didn’t get a piece of the white-flag action — “That last lap was just pretty exciting. I don’t really know what to say.” — and glad he improved after a couple of so-so series finishes.

“You gotta be fast, and you gotta be lucky,” Pierce said. “Lately our car’s been a little off, and tonight I feel like we made pretty big gains.”

At the outset of the 40-lapper, polesitter Chris Simpson led the first two laps, but shortly after giving up the lead to Bronson, Simpson slowed to draw a caution and pulled to the infield pits and climbed from his car complaining of a vibration.

Bronson’s lead was short-lived with Erb going by on the ensuing restart — Bronson hit the brakes and sparks flew as his car scraped the wall between turns three and four in the exact spot Erb would later wreck.

Erb, Bronson and Billy Moyer Jr. of Batesville, Ark., got rolling in a three-car breakaway through the first half of the race with Tanner English of Benton, Ky., a half-straightaway back.

Just after Pierce took fourth from English, Erb’s car lost momentum when he hit a hole in turn one, and Bronson sized him up to take the lead exiting turn four on the 19th lap.

A lap-25 caution for debris reset the field with Bronson ahead of Erb, but this time it was Bronson’s car that was upset by a rough patch in turn one, allowing Erb to regain the lead on lap 26.

Bronson and Pierce took up chase of Erb, a battle slowed on lap 28 when English went around for an infield foray after contact from Shirley.

Erb maintained control on the restart while Pierce took second from Bronson, and it appeared Erb was on his way to victory before Bronson regained second from Pierce on lap 37 and summoned one final charge.

Bronson gained ground at the white flag and pulled alongside Erb entering turn three as the frontrunners ran just outside Jason Feger’s slower car. Sliding from the low to high side, Bronson made hard contact with Erb’s car, sending him into the wall with Bronson finding the yellow flag, instead of the checkers, greeting him at the flagstand.

Co-promoter Tammy Gundaker met Erb after his climbed from his car, helping defuse the situation while Bronson drove around under caution.

“I’d have felt a lot better right now if it had been anybody but him leading the race on the last lap, or (if) anybody else did that to me,” Bronson said. “But we’ll move on from this, we’ll get stronger, and like I said, it’s a big booster for me team.”

On the final restart, drivers took the green and white flags together with Bronson keeping Pierce in check to wrap up the 40-lap victory.

Notes: Bronson notched his second victory of the month following June 13’s Lucas Oil Series triumph at Fayetteville (N.C.) Motor Speedway. … After their scrape on the track, Tanner English went to Brian Shirley’s pit stall to discuss the incident, sparking a fracas that included several crew members from both teams and several others, including driver Jason Feger, trying to break it up. … The feature lineup was represented by 10 states. … Because so many drivers scratched, officials dropped the C-main and ran only a B-main with Chase Junghans taking the checkers. … Among those scratches were Kolby Vandenbergh, who broke an engine in hot laps, and Blake Spencer, who wrecked in heat race action.

Polesitter Tyler Erb stayed ahead of fiesty pursuers early and pulled away to victory. Runner-up Brandon Sheppard and Frank Heckenast Jr., couldn't keep up with Erb in the caution-free prelim while Tim Manville, piloting the Lucky Dog Racing No. 1s driven earlier this season by new teammate Rick Salter, managed to hold on to fourth despite getting out of shape in turns one and two on the first lap. Louisiana visitor Cade Dillard was fifth in his Late Model debut at Tri-City while former Tri-City winner Gordy Gundaker struggled to a seventh-place finish.

Winning a groove-swapping duel with Billy Moyer on the first lap, polesitter Kyle Bronson went to the high side and cruised to a 10-lap victory in the caution-free prelim. He won by a commanding 6.522 seconds. Moyer fell a half-straightaway back after three laps and never challenged in racing to a runner-up finish while Ryan Unzicker and Jason Feger, holding off Chase Junghans, were further back in the final two transfer spots. Series points leader Brian Shirley wasn't a factor in finishing sixth, nearly three-quarters of a track behind the winner.

Polesitter Chris Simpson led all the way after outdueling fellow front-row starter Shannon Babb at the outset and raced to victory, holding off Bobby Pierce's last-ditch charge. Babb lost the second spot to Pierce on a lap-three restart, and Pierce moved up to challenge Simpson, getting enough momentum out of turn four on the final lap to pull to Simpson's rear deck at the checkers. Babb and Rodney Melvin got the other two transfer positions. A lap-three caution appeared when Australian driver Paul Stubber got into the backstretch wall exiting turn two; he retired with right-side damage. Three starts were required; the first one was called back because of a brake-check and Michael Kloos stopped on the backstretch on the second attemped start.

Fast qualifier and polesitter Billy Moyer Jr. survived a first-lap brush with the turn-four wall and a last-lap challenge from Tanner English to win the opening heat. Moyer got too high exiting turn four on lap one and the right-rear quarterpanel slapped the concrete near the spot where cars enter the track. English challenged the winner over the final seven laps, pulling alongside entering turn three on the final lap. Moyer drifted high but held off English's charge. Dennis Erb Jr. and Rusty Schlenk got the other two transfer spots as most drivers hugged the inside groove in the second half of the 10-lapper. The first start was called back because of a jumped start and a lap-three caution appeared when Black Spencer got into the wall between turns three and four; Spencer was towed off the track.

Billy Moyer Jr. of Batesville, Ark., was quickest among 37 entrants Tuesday at Tri-City Speedway, earning him a pole starting spot for the first of four heat races. Moyer tripped the clock at 15.246 seconds at the 3/8-mile oval.

Other heat race polesitters after four time groups of qualifiers were Chris Simpson of Oxford, Iowa, Kyle Bronson of Brandon, Fla., and Tyler Erb of New Waverly, Texas. The top four finishers in each 10-lap heat race will transfer to the main event.

Several World of Outlaws Morton Buildings Late Model Series regulars (Tyler Erb, Blake Spencer, Cade Dillard and Chase Junghans among them) opted to join the Summer Nationals at Tri-City. … The WoO tour co-sanctions Friday’s Summer Nationals race at Terre Haute (Ind.) Action Track; the big brother national tour was originally scheduled to co-sanction the June 29 event at Federated Auto Parts Raceway at I-55, but flooding forced that race to be shifted in the schedule, leaving WoO with a single-race weekend. … WoO points leader Brandon Sheppard, the lone Summer Nationals winner other than Brian Shirley, is competing at Tri-City in his family-owned No. B5. He’ll slip back into the Rocket Chassis house car at Terre Haute. … A hole in the oilpan during hot laps forced Kolby Vandenbergh to scratch before time trials at Tri-City. ... At the drivers' meeting, Tri-City promoters Kevin and Tammy Gundaker asked drivers to stick around a while after the main event so fans could come to the pits and meet drivers and get autographs.

After two more rainouts (what else is new?), the DIRTcar Summer Nationals returns to action Tuesday at Tri-City Speedway for a $7,500-to-win event as drivers aim to complete its fifth event in the 14th calendar day of the tour.

Series points leader Brian Shirley of Chatham, Ill., will be gunning for his fourth series victory and third in a row after dominating early on the day-after-day tour that heads to the 3/8-mile Tri-City oval that will host the series for the 20th time.

Tuesday’s 40-lapper is a makeup of a Friday rainout with an adjusted purse of $7,500-to-win (weekend races are $10,000-to-win, but the makeup purse was adjusted because of the weekday makeup).

With 37 cars, there’ll be four heat races with four drivers transferring apiece followed by C- and B-mains. If there’s 31 cars or fewer, three heats will transfer five drivers apiece with a B-main and four provisional starting spots setting the rest of the 22-car field.