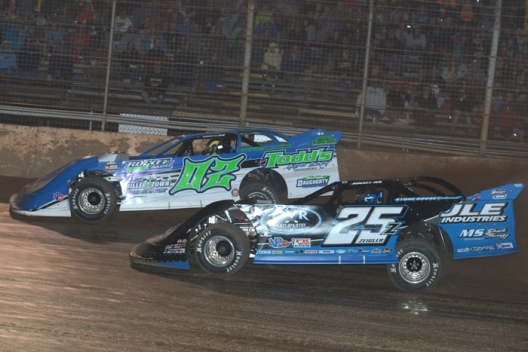 Almost exactly one year after winning his first-ever World of Outlaws Morton Buildings Late Model Series event in a Firecracker 100 preliminary feature at Lernerville Speedway, the 27-year-old driver from Sarver, Pa., repeated the feat Friday, opening his hometown track’s biggest weekend of the season with a stirring triumph in the evening’s 30-lap A-main.

“This is a dream come true here,” Norris said after his second career WoO victory worth $6,000. “Last year I couldn’t even explain how much that meant to me. This means just as much. I just love being here and to race with these guys. To stand here at the end of the night …”

Norris’s voice trailed off for a second as he clearly recognized the significance of once again beating the national touring stars at the 4/10-mile oval that sits mere miles from his home. While he didn’t flash quite the same emotion that he did after his breakthrough WoO checkered flag in 2018 — there were no tears or cracking voice as he was interviewed on the track’s p.a. system during the post-race ceremonies — there was nothing run-of-the-mill about his latest high-profile success.

In fact, this win had its own memorable attributes. For starters, he drove an XR1 Rocket car fielded by Todd Cerenzia of Canonsburg, Pa., not his familiar family-owned No. 72. And he had to pass Mason Zeigler of Chalk Hill, Pa., twice to gain control of the feature, unlike his flag-to-flag run to victory in last year’s 30-lapper.

With Zeigler starting from the pole position in his XR1 Rocket mount —directly in front of the third-starting Norris — the 2018 Lucas Oil Late Model Dirt Series Rookie of the Year led the race’s first four laps. Norris grabbed the top spot on lap five and turned back several bids from Zeigler before ceding the lead back to his fellow Pennsylvanian on lap 19. Then, on lap 20, Norris regained command and never relinquished the spot again as he survived more pressure from Zeigler before pulling away over the final two circuits to beat his race-long challenger by 2.220 seconds.

One week after debuting in Cerenzia’s car — a machine that had sat idle since Sheppard made three appearances in it during the 2017 season — in victorious fashion during a weekly program at Lernerville, Norris showed no drop in performance against a much more stacked field of cars and drivers. He was the fastest qualifier in his time-trial group and won a heat race to put himself near the front of the feature lineup.

“I was nervous in that heat race,” Norris said. “There was a lot of good cars in that one, and I said, ‘If we can beat all these guys, we might have a shot.’”

“Me and Zeigler had one heck of a battle there,” Norris said.

Indeed, on a track surface that turned quite rough in the wake of several rain-filled days, Norris couldn’t cruise to victory. He had to get up on the wheel throughout the race as he ran the rim.

“I wasn’t expecting the track to get like that,” Norris said. “You almost needed a Rayburn car, something four-wheel drive. I could never find a good line through (turns) one and two to dodge all the holes. Dakota (Bruggeman), my signal guy, kept telling me to go to the top the whole way around and I was like, ‘Well, that’s no problem.’

“I didn’t know what to do on the restarts,” he added of his mindset following the race’s five caution flags and one red flag, all of which came with Norris leading. “You kind of got to be defensive first to block the slider, but I knew my best line was going real high and diamonding it off and I didn’t want to get slid.”

Norris faced several stern challenges from Zeigler, but he managed to turn them all back, save that brief moment on lap 19 when Zeigler poked ahead. He felt thankful that Zeigler didn’t press the issue more forcefully than he did.

“He raced me clean,” Norris said of Zeigler. “He left me a lane the whole time. I appreciated that. We’ve raced a lot this year. Mason’s one them people, he’ll run you hard, but he’ll run you how you run him. There’s a mutual respect there.”

Zeigler, 26, shook his head in exasperation after falling short in his bid for a career-first WoO victory.

“I could get by him coming off two, but I could never keep my momentum off four to stay in front of him,” Zeigler said. “One time when I had an opportunity (to close the door) I just knew he was there so I had to lift. I didn’t want to stick him in the fence.

“I thought our car was actually better than his. But once he got out ahead of me and I got stuck on the bottom (in the rough part of the track) on those restarts it was just tearing my stuff up so bad to get back up to second. Coming from a dead stop, I’d hit those holes on those restarts and I would just bounce and they would eat me up.

“Once I finally got back up to second where I needed to be (for the final restart on lap 26) I reeled him in and I could get to his quarter-panel,” he added. “I actually got alongside him coming off (the corner), but to really be able to keep my momentum I had to sort of float up the racetrack and I just knew he was there. I lifted to give him room, and when I lifted it just killed all my momentum with like two to go and he got way out there and there was nothing I could really do.”

“That Norris, he’s a driving son of a —— around here,” Zeigler said. “Everyone says he runs good around here. I haven’t been able to race up here with them boys, but apparently he’s been real good and he showed it tonight.”

Norris, meanwhile, remained modest as ever after his triumph.

“It’s my home track,” said Norris, who earned a pole starting spot in a Saturday heat-race for the $30,000-to-win Firecracker 100. “Thankfully I started up front and didn’t have to mess around with a lot of people. I was able to dictate where I went, and on a (rough) track like that, it helps a lot. The car was really good too.

“Everything just fell our way. Like I said after my heat race, I’d rather be lucky than good. And tonight we were lucky.”

All of the feature’s slowdowns came between laps 11 and 26.

Two caution flags were needed on lap 11 — first when Jonathan Davenport of Blairsville, Ga., slowed with a flat right-rear tire after running in the top 10, and then on the restart when Rick Eckert of York, Pa., slid sideways in turn four and collected Chub Frank of Bear Lake, Pa., and Blake Spencer of St. Augustine, Fla. Frank made hard contact with Eckert, damaging the front clip of Eckert’s car enough that he decided to load up and immediately head home rather than attempt to patch up the car for Saturday’s program.

A caution also flew twice on lap 15 (flats for Boom Briggs and, on the restart, second-running Tyler Erb of New Waverly, Texas) and on lap 16 (Briggs again).

The A-main’s biggest incident produced red-flag conditions on lap 26 when Gregg Satterlee of Indiana, Pa., rolled over once in turn four and catching the track’s outside lip and came to rest with his car balanced on its right side. He wasn’t injured and said the damage was largely cosmetic.

With a support division sharing the Firecracker 100 weekend with the World of Outlaws Morton Buildings Late Model Series for the first time — the RUSH Crate Late Model Series is running a $10,000-to-win event on Saturday night — just short of 100 cars have jammed the expanded Lernerville pit area. Forty-six WoO entries are joined by 53 Crate competitors. … After heavy rain forced the early cancelation of Thursday’s first preliminary program, absolutely perfect weather — partly sunny skies with high temperatures in the 70s — prevail for the start of the condense two-day weekend. … Brandon Sheppard of New Berlin, Ill., headed for the Rocket Chassis shop in Shinnston, W.Va., soon after winning a DIRTcar Summer Nationals feature in his family’s No. b5 Tuesday night at Jacksonville (Ill.) Speedway; he made the overnight drive so he could pilot the house car hauler to Lernerville on Wednesday because the team’s crew chief, Danny White, was with his wife, who gave birth to the couple’s first daughter, Everly, on Monday. Alas, Sheppard received word of the early call to cancel Thursday’s show when he was 10 minutes from the Rocket shop. “So I went to sleep when I got there,” he said. … Josh Richards of Shinnston, W.Va., the 2013 Firecracker 100 winner, is in the weekend’s field, but his Clint Bowyer Racing teammate, Don O’Neal of Martinsville, Ind., is not. O’Neal ran two Lucas Oil Series events last weekend after injuring his left knee while helping his team change an engine on June 13, but he’s taking the weekend off to stay home and have the injury examined by doctors. … First-year WoO regular Dennis Erb Jr. of Carpentersville, Ill., is making his first-ever appearance at Lernerville. He’s opted to run Summer Nationals events in his native Midwest rather than enter the Firecracker 100 in the past. … Parked alongside Erb in the pit area is Tyler Erb of New Waverly, Texas, the 22-year-old who is no relation to Dennis but likes to call the veteran driver “dad.” Tyler and his Best Performance Motorsports crew made an overnight haul of over 10 hours after he finished second in Thursday’s Summer Nationals feature at Spoon River Speedway in Banner, Ill. … Max Blair of Centerville, Pa., will attempt to qualify for the Firecracker 100 for just the second time in his career. His previous stab at the event came in 2014 when he failed to make the headliner driving for John Kennedy. … Blair is one of six drivers pulling double-duty and also running a Crate Late Model, joining Chub Frank (driving a Boom Briggs car), Russ King (running Matt Latta’s No. 21 with Latta unavailable because his brother is getting married Saturday), Ross Robinson, Dan Angelicchio and Breyton Santee. … Dustin Michell of Pine Level, N.C., is a first-time Lernerville entrant. … Tim McCreadie of Watertown, N.Y., is driving the K&L Rumley No. 6; he’s actually run the Rumley Longhorn car in recent weeks but with the machine sporting Sweeteners Plus colors and his usual No. 39. … Michael Norris of Sarver, Pa., earned a Firecracker 100 guaranteed starting spot with his victory last Friday night at Lernerville in his first start driving for western Pennsylvania’s Todd Cerenzia, who fielded his XR1 Rocket No. 02 for the first time since Brandon Sheppard drove it a handful of times in 2017. Norris is in the car again this weekend.