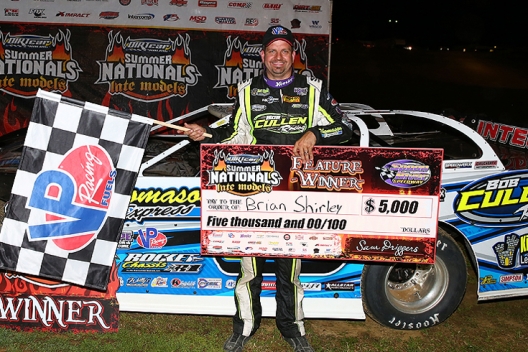 BANNER, Ill. (June 20) — If Brian Shirley’s mission has changed, his method certainly hasn’t. Undecided about whether or not he will pursue the entire DIRTcar Summer Nationals schedule this season, the 2018 champion has yet to take his foot off the gas. Three races in and Shirley, of Chatham, Ill., looks more than capable of defending his title, whether he wants to or not.

Looking much like the driver who won four of 10 races during the middle stretch of last year’s tour en route to 16 top-fives overall, Shirley dominated Thursday’s stop at Spoon River Speedway. He took the lead from polesitter Shannon Babb of Moweaqua, Ill., on the opening lap and was never challenged on his way to a $5,000 payday, his second in three events.

“We’ve been pretty fortunate,” said Shirley. “Things have just been pretty good … comfortable in the car. It might not always be the best car, but it’s pretty stable night to night. So we’re just gonna stay within where our package is right now and see if we can’t find maybe a few things here and there to get a little better, but all in all, it was a pretty good night.”

Shirley opened up leads as much as three seconds before winning by 1.264 seconds ahead of fourth-starting Tyler Erb of New Waverly, Texas. Frank Heckenast Jr. of Frankfort, Ill., started sixth and finished third, while third-starting Tanner English of Benton, Ky., slipped one spot to finish fourth. Bobby Pierce of Oakwood, Ill., charged from 17th after winning the consolation race and completed the top five.

On the second attempt to start the race, Shirley pulled ahead of Babb and quickly began to pull away. Nineteen caution-free laps allowed Shirley to build his advantage. By lap 12, he was a full straightaway head. Babb’s pursuit ended on lap 19 when he popped a right rear tire, leaving Erb, English and Heckenast to pick up the chase.

“You come up on (lapped cars) and they were pretty fast too,” said Shirley. So you really had to wait on someone to make a move or do something different and luckily we were maneuverable to where if they were in the bottom we could go to the top. And then there at the end, when I was coming up on (Bob) Gardner, my crew guy was telling me I had a pretty big lead, so I didn’t want to press anything with five laps to go.”

With five laps remaining, Erb and Heckenast were more concerned with each other than they were with the leader.

“I wish I had moved up in (turns) one and two (sooner) like at the last five or 10 laps,” said Erb. “When Frankie got underneath me, I had no choice but to run through high in one and two and I actually made a little bit of ground. You never know what could have happened. If grasshoppers had machine guns, then birds wouldn’t eat ‘em. My dad always told me that back in the day.

“I really wish I had moved up earlier, like when Tanner (English) was underneath me I wish I would have just stuck it out like one lap there. But I was just trying to like, not turn it over. It was real bouncy. It may not have looked like it, but it feels like you’re gonna flip quite a bit just because of the speed and the G-force and stuff.”

Heckenast said the rugged surface in turn three was nearly his undoing as well as he not only lost a lot of ground early, but also put undue stress on his tires well before he wanted.

“The first lap or two after the second restart I bounced so bad for a lap and gave up three of four spots and had to fight our way back and hurt my tire getting there,” said Heckenast. “When I got there, I had just enough to get by (Erb) and he got up on the wheel actually and got back by me. It was a good night. Third’s good, but we’re here to win. They say top threes and fours (and) you’ll get the win, so we’ll keep hanging in there and see what happens.”

Notes: The victory was Shirley’s first Summer Nationals win at Spoon River and 21st overall on the series, moving him to eighth on the tour’s all-time win list. He needs one victory to tie Dennis Erb Jr. of Carpentersville, Ill., for seventh and only two to tie Bobby Pierce and Rick Aukland, who are knotted in fifth. … The race was slowed by two cautions, one on the initial start when Kyle Bronson and Ryan Unzicker got together in turn one and another on lap 19 when Babb slowed with a right rear tire. Babb, the tour’s 2018 winner at Spoon River returned to the track and finished 13th, the final car on the lead lap. … Billy Moyer of Batesville, Ark., who started 13th, was involved in the opening lap scrape as well. He pitted and returned to make only two laps before calling it a night. He made an early departure for the second straight race and finished 21. … Billy Drake of Bloomington, Ill., was scheduled to start 12th, but elected to pull to the rear of the field, complete one circuit and pull to the infield. … Walker Arthur of Forest, Va., exited early to simply get out of the way of the frontrunners. … Part-time prognosticator Tyler Erb feels good about his next visit to Spoon River following Thursday’s runner-up finish. “It was a good night, you know. I ran third here last year and second this year, so 2020, you know who’s gonna win,” joked Erb. “I’m kidding, but the last time I said that, I did win, so maybe I will.” … Erb, whose mark of 12.995 seconds during time trials set a new track record, loaded up quickly and headed to Pennsylvania for this weekend’s Firecracker 100 at Lernerville Speedway. “I want to thank (car owner) Eric Brock for letting us drive all this way. Logistically, this is not the best way to get to Lernerville,” said Erb. “He’s a great car owner. He gives us everything we need to perform.”

Bobby Pierce of Oakwood, Ill., led the entire 12-lap distance to win the consolation race. Pierce finished a comfortable 2.253 seconds ahead of runner-up Bob Gardner as those two each advance to the 40-lap main event.

Tanner English of Benton, Ky., took advantage of a complete restart to power ahead of Jason Feger and roll to victory in the final heat. English and Feger battled door-to-door on the first start, but Walker Arthur spun in turn three on the opening lap, resulting in a complete restart. English took the lead on the second start and was never challenged as he finished 2.019 seconds ahead of Feger. Billy Drake and Arthur completed the top four.

Winning the battle of Lucas Oil Late Model Dirt Series regulars on the front row, polesitter Tyler Erb of New Waverly, Texas, grabbed the lead ahead of Kyle Bronson on the opening lap and pulled away to win the third heat. Frank Heckenast Jr., slipped by Bronson on lap three for the second spot and finished 0.496 back of the winner. Bronson finished third, with Kevin Weaver taking the fourth spot in a caution-free heat.

Shannon Babb of Moweaqua, Ill., wrestled the lead away from polesitter Rodney Melvin on the third lap. The two battled even for the first two-plus laps with Melvin rolling on the top and Babb digging on the bottom until Babb grabbed the lead just before a caution. On the restart, Babb jumped to the top and pulled away to win buy 1.262 seconds. Rodney Melvin held on to finish second, while Rusty Schlenk went to the top to take the third spot from Kolby Vandenbergh, who finished fourth. The caution waved on lap three of Ricky Frankel, who spun in turn four.

Brian Shirley of Chatham, Ill., bolted into the lead on the opening lap en route to dominating the first heat. Third-starting Allen Weisser finished second 3.914 seconds behind in the caution-freee heat. Ryan Unzicker finished third, with second-starting Billy Moyer grabbing the fourth and final transfer spot. “We’ll just go back, keep an eye on this racetrack and see how the feature rolls out,” said Shirley.

Mild temperatures greeted drivers Thursday at Spoon River, but more importantly, it’s dry. Though rains on Tuesday and Wednesday provided a heavy racetrack, few seem to mind as the Late Model car count, 34, is up 11 from last year’s tally. … Among drivers making their first series appearance this season: Tyler Erb, Kyle Bronson and Billy Drake. … Erb, of New Waverly, Texas, planned to compete in the World of Outlaws-sanctioned Firecracker 100 at Lernerville Speedway, but when Thursday’s prelim at the Sarver, Pa., oval was rained out, Erb made a beeline for Spoon River. He still plans to head to Lernerville for Friday-Saturday Firecracker 100 action. He plans to rejoin the series Sunday at Haubstadt. … Kevin Weaver of Gibson City, Ill., is driving the No. 77M of Watseka, Ill.’s Jay Morris. … Bobby Pierce of Oakwood, Ill., jumps back in his Rocket XR1 tonight after finishing second at Jacksonville in his 2016 Bob Pierce Race Car. … Paul Stubber of Bunbury, Australia, now in his third full season on the Hell Tour, said Spoon River is the one track on the tour that reminds him of some of the tracks he competes at Down Under. “The main one that we race on, Motorplex, is (similar) in width and length,” said Stubber, who missed last year’s Spoon River race because of a previous business commitment, while finishing 15th in the 2017 event. … Jason Wagner, who like Allen Weisser, is pulling double duty in Late Model and modified action, flipped his mod during qualifying, but car owner Mark Barnes said the Morton, Ill., driver wasn’t injured. ... A couple of late entries, Billy Hough of Thomasboro, Ill., and Cliff Powell of Hannibal, Mo., pushed the car count to 35.

The DIRTcar Summer Nationals roll into Spoon River for the 24th time. After more than an inch of rain was dumped across central Illinois late Tuesday and throughout Wednesday, track officials whipped the pit area in shape and told competitors to expect a fast track surface Thursday night.

Looking for his first Spoon River Summer Nationals win, series points leader Brian Shirley of Chatham, Ill., leads the series to the modestly-banked 3/8-mile oval, which is just the third event on the month-long grind following a bevy of rainouts to kick off this year’s tour. Shirley enters with a victory and a third-place finish. Thanks to his runner-up finish on Tuesday at Jacksonville, Bobby Pierce of Oakwood, Ill., leapfrogged four drivers in the tour standings, going from seventh to third.

The evening’s Super Late Model program starts with 6:15 p.m. hot laps followed by group time trials. If there’s 31 cars or fewer, three heats will transfer five drivers apiece with a B-main and provisionals used to set the rest of the 22-car field. If the track draws 32 cars or more, there’ll be four heat races with four drivers transferring apiece followed by C- and B-mains.