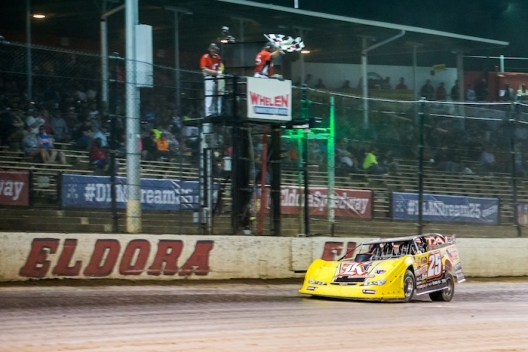 ROSSBURG, Ohio (June 7) — Most of the time, catching lapped traffic tends to slow the leader down. Not Friday. Not Shane Clanton. Leading every lap from the pole, the Zebulon, Ga, driver drove to a dominating win in Friday’s second Dream XXV preliminary feature at Eldora Speedway. Slowed only by a single caution — the first yellow flag in 77 feature laps at Eldora this weekend — Clanton cruised to a 3.494-second victory ahead of Chris Ferguson of Mount Holly, N.C.

Clanton, winner of the 2012 Dream and the 2008 World 100, earned $10,000 for his third feature win of the season. After losing the runner-up spot to Ferguson following the 25-lapper’s lone restart, polesitter Ross Bailes of Clover, S.C., finished third. Fifth-starting Chase Junghans of Manhattan, Kan., finished fourth and Don O’Neal of Martinsville, Ind., completed the top five after starting sixth.

“I knew I had a good car. I just needed to keep the nose clean,” said Clanton. “I tried the top a little bit and (Gregg Satterlee was) trying to get some of that moisture leaving the bottom and he was right were I needed to be to make a good lap, but I knew I was OK where I was. I didn’t feel like I was losing no ground and I could maintain down the straightaway.”

For better than half the feature, Clanton was more than just maintaining his advantage over the second-running Ferguson, even after reaching traffic. After catching the tail of the field on lap 11, Clanton muscled his way between Earl Pearson Jr. and Rod Conley. He led by 2.629 seconds on lap 12 and extended the margin to 3.047 seconds by lap 18 after Ferguson got caught up behind Pearson. A few laps later the lead ballooned to 3.612 seconds before Clanton eased up a bit in the waning laps.

“We’ve been struggling all year long, but it’s a never-give-up attitude with this team. We just work awful hard,” said Clanton. “The competition is so tough this year. I’m not picking on nobody that’s this and that. You look at the caliber of cars that are here and you come out on top … it’s pretty special. It means a lot. I run good at this place, but when you outrun the best of the best, it’s pretty special.

“It takes a team effort and we didn’t give up. We’ve got a no-give-up attitude and we’ll just work until nobody else can work. I promise you we work as hard or harder than everybody else in the pit area, it’s just sometimes it don’t show it. This year is a testament of when we work hard, this is what we get.”

Clanton said despite Friday’s dominating performance, he hopes he can still tweak on his Capitol Race Car, making it a bit better for Saturday’s finale.

“We’re not as good in traffic as we want to be,” he said. “We’re good out front. Hopefully we don’t mess that up and we can make it where we can pass cars easier.”

Ferguson, whose second-place finish backed up his fourth-place run on Thursday, said there’s room for improvement on his Sweet-Bloomquist Race Car as well.

“I would’ve liked to have been a little closer to Clanton. He had a phenomenal car in the heat race and in the feature, but we’ll take second at this place with this group of guys,” Ferguson said. “These cars they steer real good and when you can get ‘em to turn, they’re one of the best driving cars you could ever … you know my grandma could probably drive it. Tonight we got a little too tight in the feature, which I’ve never ever done that in my racing career, been tight in a feature at Eldora, so that says something about these cars here.

“As long as we can get her to steer a little better (Saturday), I’m excited if we can get in (the feature) and be comfortable and make 100 laps.”

Bailes coupled his third-place finish with a 17th-place finish on Thursday, a solid start for the Barry Wright Race Cars house car driver making his Eldora debut this weekend. Like Clanton and Ferguson, Bailes was quick to heap praise on his chassis builder.

“Anytime you can come to a new track and even finish on the podium or make the show, that says a lot,” said Bailes. “I wasn’t expecting to do this well to start out with. But it tells everybody how good our car is. When I can come to a place I’ve never even seen before and be fast in qualifying, be fast in the heats and be fast in the main, that just says it all about Barry and Lance (Wright’s) car.”

Notes: Clanton’s two previous wins this season came Feb. 9 in World of Outlaws Morton Buildings Late Model Series action at Screven Motor Speedway in Sylvania, Ga., and May 24 in an unsanctioned feature at Lernerville Speedway in Sarver, Pa. … All 24 starters were running at the finish, with 20 still on the lead lap. … The lone caution waved on lap two for Gregg Satterlee and Earl Pearson Jr., who got together in turn four. … While thanking his crew after the race, Chris Ferguson gave a shout out to his Memaw. “Yeah, she taught me how to drive,” quipped Ferguson. … While he slipped four positions from his third starting spot, Josh Richards of Shinnston, W.Va., made solid gains from Thursday’s 24th-place finish. … Driving a Sweet-Bloomquist Race Car fielded by Bloomquist, Shannon Babb of Moweaqua, Ill., finished ninth, improving two positions from his finish in Thursday’s prelim. … Hudson O’Neal of Martinsville, Ind., was one of only a couple of drivers to make big moves forward, going from 20th to 13th despite some damage to his right rear quarterpanel and right side spoiler after tagging the wall early in the race.

Polesitter Devin Moran of Dresden, Ohio, dominated the second consolation, winning by 5.089 seconds ahead of Rod Conley. Conley finished well ahead of John Henderson, while Duane Chamberlain and Vic Hill rounded out the top five. Both Moran and Conley advanced to the 25-lap feature.

Johnny Scott of Las Cruces, N.M., slipped by racelong leader Dennis Erb Jr. on lap seven and pulled away to win the first consolation. Erb grabbed the on the opening lap from the pole, but Scott, a Late Model rookie making his Eldora debut, quickly closed in to challenge for the lead. He grabbed the point with five to go and went on to a 1.904-second victory. Nick Hoffman, Brandon Kinzer and Jeep Van Wormer completed the top five. Only to the top two transfer to the main event.

Polesitter Shane Clanton of Zebulon, Ga., the 2012 Dream winner, dominated the final heat of the night, winning by 2.491 seconds ahead of Chris Ferguson, who started third and grabbed the second spot on the opening lap. Fourth-starting Mile Marlar finished third, while Gregg Satterlee advanced from sixth to finish fourth. Hudson O’Neal improved two positions to grab the fifth spot as polesitter Vic Hill slipped all the way back to eighth.

Powering around polesitter Shannon Babb on lap six, fourth-starting Chase Junghans of Manhattan, Kan., led the final six circuits to win the third heat. Babb, driving a second entry fielded by Scott Bloomquist,  jumped to an early lead and led the first six laps with his black and white No. 0B glued to the bottom of the track before settling for second. Fifth-starting Dale McDowell briefly took second from Babb before falling back to finish third. Tim McCreadie and Chad Simpson completed the top five.

Ross Bailes of Clover, S.C., slid by polesitter Steve Roberts on lap three and led the remaining seven laps to win the second heat. Bailes finished 2.190 seconds ahead of Don O’Neal for his first heat win at Eldora. O’Neal used a slider on lap six to grab second from Roberts, who was shuffled back to fourth on the final circuit by Brian Shirley. Donald McIntosh cracked the top five on lap eight and held it for the final transfer spot.

Polesitter Steve Casebolt of Richmond, Ind., the 2007 Dream winner, got the jump on fellow front row starter Tyler Erb on the first lap and pulled away to win the first heat comfortably. Josh Richards advanced from third to grab the second spot ahead of Erb and finished 1.543 seconds behind the winner. Earl Pearson Jr, the Group B overall fast qualifier finished fourth, while Scott James turned back 2016 Dream winner Dennis Erb Jr. for the fifth and final transfer spot.

Brian Shirley’s third-place finish in Thursday’s first feature got him off to a strong start one year after he skipped the Dream weekend to prepare for a run at the grueling DIRTcar Summer Nationals. This year the Chatham, Ill., driver’s Bob Cullen-owned team is shifting gears, entering Eldora’s action while noting that he doesn’t plan to defend his 2018 Hell Tour championship. Shirley said he will likely run the Summer Nationals shows close to his shop, including at least the first five races starting Wednesday at Peoria (Ill.) Speedway. … Tyler Erb of New Waverly, Texas, wasn’t satisfied with his eighth-place finish in Thursday’s second feature, but he did achieve something new earlier in the program. “I think this is the first heat race I’ve ever won at Eldora,” the driver of the St. Marys, Ohio-based Best Performance Motorsports car said after his triumph in a preliminary. … Josh Richards of Shinnston, W.Va., had a rough opening night, losing his second qualifying lap when he slapped the turn-one (his first circuit was fast enough to get him the third starting spot in his heat) and then bending his Clint Bowyer-owned car’s rear deck in the heat and dropping to a sixth-place finish. He came back to crack the feature field with a B-main triumph but finished 24th in the feature. … Devin Moran of Dresden, Ohio, was a surprising DNQ on Thursday in Tye Twarog’s No. 9. His night was set back by his involvement in an opening-lap heat-race scrape that bent the car’s nose piece and front end. … Open-wheel modified ace Ricky Thornton Jr. of Chandler, Ariz., whose 21st-place finish in Thursday’s second feature was his first Dirt Late Model start of 2019, plans to make several more appearances this season in the Curless Motorsports No. 99RT, including selected Summer Nationals races, the Prairie Dirt Classic and the World 100.