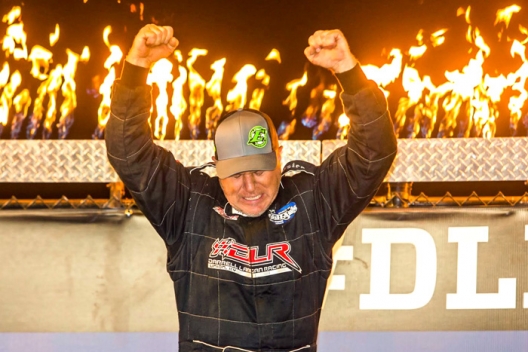 Reeling in Davenport as he worked through late-race lapped traffic, Lanigan crossed the stripe door-to-door with the race leader on the white-flag lap. Powering down the backstretch, Lanigan edged ahead out of turn four, narrowly taking the checkered flag for his second victory of 2019.

“It was getting tight down that back shoot with the lapped car,” Lanigan said of the race’s final lap. “I knew I had to stick it in there and (Davenport) was going stick it in there too. Luckily we both came out of there clean. What a race.”

Redrawing to start outside the front row, Davenport shot to the lead at the drop of the green flag, setting a torrid pace out front through the early stages of the race. As the race leader navigated through the rear of the field with just a handful of laps remaining, the fifth-starting Lanigan took advantage, making his move to the front.

“We were staying kind of even there for the first half of the race,” Lanigan said. “Then the second half I found me a little different grove going there. I could reel him in a little bit and then he caught that lapped traffic and then I got on him pretty good.”

At the halfway mark, it appeared that Davenport, a former Dream and two-time World 100 winner, was well on his way to yet another Eldora victory, as he held nearly a half straightaway lead over second-running Shirley. His demise would come in the final two laps.

“I just got pinned behind those lapped cars, didn’t really know where to go,” Davenport said. “There was one holding me up pretty bad there. I showed him my nose and then I got by him, then he tried to drive back around me on the outside. But I ain’t going to make any excuses. We had a really good car. At one point I think we almost had a straightaway lead there.

“Just didn’t really know where to go on the racetrack. I was trying not to go to the top. I told (crew chief) Jason (Durham) ‘I ain’t even going to look at the top,’ and we rolled out there. I think we know what to do to be just a little bit better for this $100,000. That’s our main focus.”

Aiming to make his first Dream start since 2016, a podium finish marked a solid start to the weekend for Shirley, who has piled up wins around his home-state of Illinois already this season. The two-time DIRTcar Summer Nationals champion has qualified for the $100,000-to-win event five times in his career.

“All in all, it was a good night to get going on a Thursday night,” Shirley said. “We’ll try to get a little better tomorrow.”

Lanigan, who currently sits third in the World of Outlaws Morton Buildings Series standings, notched a Dream preliminary feature victory for the third straight season. He won the Eldora crown jewel event back in 2003, so he knows just how special it is to stand on the Big E’s victory lane stage.

“Any time you can get a win and come up here on this stage at Eldora, it’s big,” Lanigan said. “I definitely like these preliminary races. They pay $10,000, so that’s an awesome win. It’s been an awesome night.”

Polesitter Nick Hoffman took an early lead, with Jeep Van Wormer sliding seventh to fourth on the first lap. With the top two cars distancing themselves from the field at the halfway mark, Frank Heckenast Jr. closed the gap between himself and Hoffman. Unable to challenge for the lead in the final laps, Heckenast finished second, with Hoffman winning the consolation.

Outside poleistter Michael Norris led the opening lap, with third-starting Zack Dohm running on his back bumper. Norris and Dohm crossed the line nearly side-by-side for several laps, with Dohm pulling ahead down the backstretch to lead the sixth circuit. As the laps clicked off, polesitter Bobby Pierce rolled around the top side, attempting to overtake Norris after falling back to third early. Dohm won the consolation, with Pierce taking second after Norris suffered mechanical issues in the final corner.

Polesitter Tim McCreadie shot to the lead at the drop of the green flag, with Kyle Bronson charging from his fourth starting spot to take an early second. With McCreadie setting a torrid pace out front, fifth-starting Hudson O’Neal attempted to reel in third-running Chris Simpson at  the halfway mark. Starting eighth, Dennis Erb Jr. moved into a transfer spot by lap six. Holding a comfortable lead, McCreadie won the heat, with Bronson running second. Simpson, O’Neal and Erb rounded out the top five to transfer to the feature.

Racing side-by-side with fellow front-row starter Brian Shirley through turn four, polesitter Earl Pearson Jr. edged ahead to lead the first lap. With Pearson holding a comfortable lead out front, Chris Ferguson closed the gap between himself and second-running Shirley at the halfway mark. Never seriously challenged throughout the distance, Pearson won the heat, with Shirley holding off a last-lap slide job from Ferguson to finish second. Andrew Reaume ran fourth, with John Blankenship running fifth to transfer to the main event.

Rolling around the top side, second-starting Jonathan Davenport took an early lead, with polesitter Michael Page slipping back to fourth on the first lap. It was ninth-starting Michael Norris on the move early, charging from the fifth row to run in sixth at the halfway mark. Stretching his lead to nearly a full straightaway on the seventh circuit, Davenport won the heat, with Mason Zeigler finishing second. Gregg Satterlee, Scott James and Page grabbed feature transfer spots.

Polesitter Chad Simpson shot to the front of the field at the drop of the green flag, with fourth-starting Darrell Lanigan powering ahead of Johnny Scott and Dylan Yoder to take second. A yellow flag waved on the third lap when Chuck Hummer spun in turn four. Challenging Lanigan for second on the restart, Scott nearly got sideways, slowing Bobby Pierce’s charge from the seventh starting spot. Closing the gap between himself and the race leader, Lanigan pulled alongside Simpson on the white flag lap, finishing a narrow runner-up at the checkered flag. Yoder ran third, with Scott finishing fourth. After an early battle for the final transfer spot with Pierce, Brandon Overton ran fifth to qualify for the feature.

Tim McCreadie of Watertown, N.Y., will bid to become just the second driver to follow a World 100 victory with a Dream triumph nine months later — joining Scott Bloomquist of Mooresburg, Tenn., who won the races back-to-back in 2001 and ’02 — driving Kevin Rumley’s Longhorn car re-skinned with T-Mac’s usual Sweeteners Plus colors and No. 39. McCreadie also piloted Rumley’s Cornett-powered machine under his Sweeteners Plus banner in last weekend’s Lucas Oil Series events at Mississippi’s Magnolia Motor Speedway, where he registered three runner-up finishes. … Chris Ferguson of Mt. Holly, N.C., is debuting a new Sweet-Bloomquist car. When Ferguson’s brother, Brandon Conard, was asked when the team completed preparation of the mount, he quipped, “We’re still finishing it.” … Ferguson’s crew includes former Scott Bloomquist mechanic Cody Mallory. … USMTS open-wheel modified champion Johnny Scott of Las Cruces, N.M., is making his Dirt Late Model debut as a teammate to his twin brother Stormy, a Lucas Oil Series regular who is racing at Eldora for the first time. … Selinsgrove, Pa.’s Jim and Dylan Yoder are debuting at Eldora together, perhaps becoming the first father-and-son to make their first crown jewel event starts at the half-mile oval on the same day. … Chad Simpson of Mount Vernon, Iowa, is driving Larry Moring’s No. 1 for the third time this season; his previous starts came in a pair of Lucas Oil Series shows last month in his home state. … Returning to Eldora action after absences are former World 100 John Blankenship of Knoxville, Tenn., who recently made his first Dirt Late Model start since 2015, and Brandon Kinzer of Campbellsville, Ky., who didn’t enter Eldora’s big shows last year while battling back problems. … Australian Paul Stubber is in the field as he prepares for his third straight tour of duty on the DIRTcar Summer Nationals. … Eldora stalwart Jeep Van Wormer of Pinconning, Mich., is behind the wheel of an XR1 Rocket that he debuted last weekend with a runner-up finish at Tri-City Motor Speedway in Auburn, Mich. That was his first race since he failed to qualify for last October’s rescheduled World 100. “They had to sandblast my ass (at Tri-City) because I was so rusty,” Van Wormer said. … Kody Evans of Camden, Ohio, experienced engine trouble during hot laps.