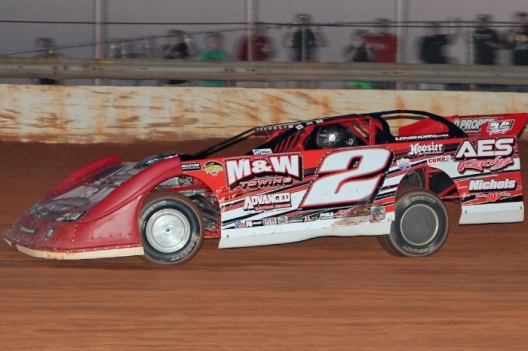 The seventh-starting Franklin charged past race leader Casey Roberts of Toccoa, Ga., down the backstretch on the 39th lap of the 53-lap event and was not challenged thereafter. Roberts, who took the lead from Brent DIxon of Elberton, Ga., on the seventh circuit, held second through the finish, while Casey Barrow of Bloomingdale, Ga., came forward from 10th to show third. Eric Jacobsen of Rio Del Mar, Calif., and Donald McIntosh of Dawsonville, Ga., rounded out the feature's top-five finishers.

After struggling in time trials, Franklin transferred to the feature through a consolation race. He advanced through the front of the field, biding his time when he moved to the third-place spot.

After finishing 23rd Friday in series action at Swainsboro (Ga.) Raceway, Franklin said his team made major adjustments to his No. 2 Longhorn Chassis before Saturday’s race.

“My crew, we talked about it,” Franklin said. “We throwed everything at this car. We changed a whole different setup tonight. It was awesome. The car was unbelievably fast. Night and day difference.”

Looking to notch his second straight Southern Nationals victory, Roberts fell to Franklin late in the race after experiencing vibration issues. The outside polesitter held on to second at the finish.

“I thought first the rear end may be going or something, but I think it was the tires chattering real hard, so I started rolling out a little bit, and we got in lapped traffic … we were just a little too tight,” Roberts said. “Rambo had the better car tonight. Glad he won the race. We’re keeping the Longhorn thing going pretty good, so congratulations to him.”

Notes: Franklin's previous series victory came July 13, 2010, at Carolina Speedway in Gastonia, N.C.; he also won Screven's Southern Nationals events in both 2008 and 2009. ... Dixon, the polesitter and DirtonDirt.com dash winner, led the first six laps but retired from the event after stopping in turn two to draw a lap-16 caution; he finished 20th. ... Ivedent Lloyd Jr. of Ocala, Fla., ran amongst the frontrunners for much of the race but fell from contention late. ... Johnny Pursley (lap four) and Stacy Boles (lap 22) were charged with the race's other cautions. ... Series points leader Chris Madden of Gray Court, S.C., started 19th and finished a quiet eighth, posting his worst finish on the 2014 circuit to date. ... Following the event, Kenny Collins of Colbert, Ga., tweeted his plans to drop off the tour. ... Rome (Ga.) Speedway wraps up a three-race weekend in Georgia on Sunday before the tour takes a one-day break.