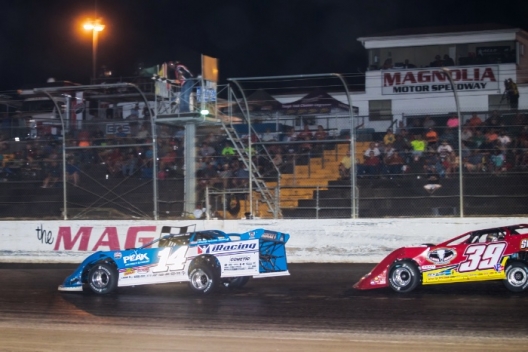 That bizarre streak came to an end Thursday at Magnolia Motor Speedway.

Starting on the pole but allowing fourth-starting Tim McCreadie to grab the lead in the first turn, the 31-year-old Richards discovered the winning groove before the Watertown, N.Y., driver the 11th lap and led the rest of the 25-lap main event for his first series victory since the 2018 season finale. The opening night victory at the 11th annual Geico Clash at the Mag at Magnolia Motor Speedway paid $5,000 and gave Richards his first victory at the 3/8-mile oval.

“We’ve had a lot of speed lately, we just haven’t been able to put it together. It was a 25-lapper, but it feels good to get back to victory lane,” said Richards, who’ll run another 25-lapper Friday and is in the catbird’s seat for Saturday’s 100-lap finale by virtue of his victory. “Hopefully we can get a few more.”

With the frontrunners held up by slower cars, McCreadie took a couple of frontstretch bids at regaining the lead from Richards, but he settled for second — his best series finish of 2019 — in finishing 0.182 seconds behind in the caution-free race.

Don O’Neal of Martinsville, Ind., who started alongside his Clint Bowyer Racing teammate Richards on the front row, ran in the third spot every lap with his son Hudson O’Neal, also of Martinsville, Ind., and Mike Marlar of Winfield, Tenn., rounded out the top five. Series points leader Jonathan Davenport of Blairsville, Ga., was 10th in the non-points event (Saturday’s finale is the weekend’s lone points race).

Richards didn’t get a good start, but when the low groove picked up a rubber strip that provide the surface’s best traction before halfway, he pounced on it.

“We fired off and I spun my tires, and Timmy got rolling there. I knew he was really good in the heat race,” Richards said. “ Well then, I just tried to pace myself and move to the middle of the track, and the car felt really good. Well then, all at one time, the track just (locked down on the bottom).

“We got there and were able to get back by ‘em, and I knew at the end, we just needed to keep the lapped cars far enough ahead that we didn’t get jammed up. I thought we were going to get tangled up with ‘em a couple of times.”

McCreadie took the blame for not realizing he needed to abandon his groove higher on the Johnny Stokes-promoted racetrack.

“My guy was pointing me down (on the racetrack), and I just didn’t move down. It’s kinda my fault, but we’ll take a second the way we’ve been running.”

He’s confident the Longhorn Chassis house car will be in the mix the rest of the weekend. “Tonight, we were focused and I think we’ll have a good piece. I’m excited for what’s to come,” he said.

The third-finishing O’Neal, the 2012 and ’14 Clash at the Mag winner, plotted his winning move, but it didn’t pan out.

“I thought, ‘All I’ve gotta do is get the jump on this thing and I’ll win this thing.’ Well, I did, but it lasted into turn one and it was over with,” O’Neal said. “But congratulations to Josh, he needed it just like we needed it. We’ll take the third. It’s a good points night (to qualify) for Saturday night’s deal.

“I sure didn’t see that rubber coming at all. You know, I thought it’d have been 25 laps (racing) all over it and not rubber up around that bottom. I think it surprised a lot of us. … I’m sure it ain’t going to be like that tomorrow night.”