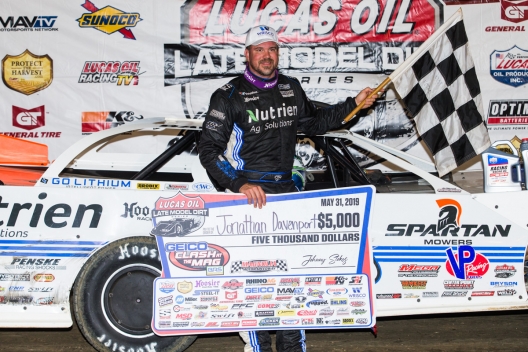 COLUMBUS, Miss. (May 31) — Jonathan Davenport rarely has two subpar nights in a row. By his standards, Thursday’s 10th-place finish in the weekend’s opening preliminary feature for the 11th annual Geico Clash at the Mag, was lackluster at best. It took less than 24 hours for the Blairsville, Ga., driver to bounce back however.

Darting into the lead from his pole starting position, Davenport led all 25 laps Friday night at Magnolia Motor Speedway to win the second 25-lap preliminary feature for the Lucas Oil Late Model Dirt Series event. Davenport earned $5,000 in the caution-free feature for his series-leading seventh victory of the season.

“Just like last night … this Lucas Oil Late Model Dirt Series is so competitive, just going out (in time trials) a couple cars too late almost put us out of the top 10 last night,” said Davenport. “And I know (track promoter) Johnny (Stokes) is gonna keep working on this racetrack and make it better. These places like this are almost like race cars, you gotta keep adjusting on ‘em to make ‘em better and I know he’ll get it right for that 100-lapper tomorrow.”

Davenport tweaked his Lance Landers-backed Longhorn Chassis just enough. After qualifying ninth in his group on Thursday, he improved six spots Friday and qualified third in the first group. That put him on the outside front row of the first heat, which he won, giving him the pole for Friday’s main event.

Davenport parlayed that into a flag-to-flag win. Davenport pulled ahead of Mike Marlar of Winfield, Tenn., on the opening lap, Davenport and eased out to a comfortable lead. After sailing around the top for half the race, he managed to pull back down to the bottom groove just in time to keep a fast-charging Tim McCreadie of Watertown, N.Y., at bay over the final 10 circuits.

McCreadie, who started seventh, finished second, backing up Thursday’s runner-up finish, while Devin Moran of Dresden, Ohio, advanced from 11th to finish third. Marlar slipped to fourth after starting on the front row alongside Davenport, and Don O’Neal of Martinsville, Ind., finished were he started in fifth.

“I think we’ve definitely turned the corner with these (Longhorn Chassis). We’re getting better and better and now (Tim) McCreadie’s rolling really good also,” said Davenport. “We’re trying different things on the car. These things have been so spot on the last two months. We really haven’t gotten to race a lot, so we’ve just been unloading with kinda one package and working around it. So we definitely changed so things up the last two nights, seeing what works better and not.

“The racetrack kinda throwed us a curveball. I didn’t know when it was gonna move off the top. I knew it was going to at some point. Luckily I could see (crew chief and spotter) Jason (Durham) tonight. That’s the first time I’ve been able to see him. I moved him on around the corner where I could see him. We moved down at the right time and we held on for one more win.”

McCreadie was right in Davenport’s tracks at the finish. He began working the low side sooner than most, using it move into fourth on lap seven and third on lap eight. While second-running Marlar chipped into Davenport’s lead, McCreadie was trimming his deficit behind them both. Marlar pulled even with Davenport in turn two on lap 10. But as soon as Davenport was clear, he headed to the bottom also.

McCreadie, who grabbed second from Marlar on lap 12, said his poor qualifying effort put him behind early in the night.

“I don’t know what happened in qualifying,” he said. “I got a little wide over there and I guess it was just still a little slimy and it put us a little behind. And then I messed up. It was a little tough with the crumbs down there on the bottom, but all in all we’ll take it and move on to tomorrow and hopefully we can put 100 laps together.”

By virtue of his two runner-up finishes, McCreadie will start from the pole of Saturday’s $15,000-to-win, 100-lap Geico Clash at the Mag finale. Josh Richards of Shinnston, W.Va., who won Thursday and finished seventh on Friday, will start on the front row as well. O’Neal will start third, with Davenport starting fourth. Marlar and Moran will start from the third row.