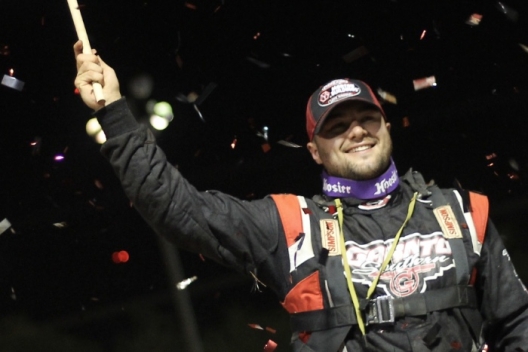 COCHRAN, Ga. — Brandon Overton is still striving to find his rhythm in his new Rum Runner Racing ride, but he’s clearly figured out how to go fast in World of Outlaws Morton Buildings Late Model Series events contested in his native state.

“I love coming home and racing places I grew up racing at,” said Overton, who previously was victorious in the national tour’s Feb. 8 season opener at Screven Motor Speedway in Sylvania, Ga. “It’s cool. I can’t thank everybody in those stands enough for coming out and watching.”

Overton fell to third from his outside pole starting spot at the initial green flag of Cochran’s first-ever WoO A-main, but he rallied to grab the $10,000 winner’s check in his Cornett-powered XR1 Rocket. First, on lap 18, he overtook WoO points leader Brandon Sheppard of New Berlin, Ill., for second. Then he chased down Chase Junghans of Manhattan, Kan., and passed the series regular for the lead on lap 29 while racing through lapped traffic.

Junghans, 26, mounted a late-race bid to regain command, but Overton turned back the challenge and beat Junghans to the finish line by 1.895 seconds to record his fifth career WoO checkered flag. Overton also became just the second driver to register multiple wins in this season’s 13 WoO events, joining Sheppard, a seven-time victor.

WoO Rookie of the Year leader Ricky Weiss of Headingley, Manitoba, slipped past Sheppard for third on lap 35 and finished in the show position, albeit more than 6 seconds behind Overton at the conclusion of the non-stop race. Sheppard settled for a fourth-place finish after leading laps 1-13, failing to convert his pole position start into a second consecutive WoO victory. Darrell Lanigan of Union, Ky., advanced three spots during the 50-lapper to complete the top five.

Overton employed a patient approach early in the affair, letting Sheppard and the fourth-starting Junghans set the pace. He began to turn up the wick, however, soon after Junghans surged ahead of Sheppard to grab the lead on lap 14.

“Really, to be honest with you, I was trying to ride around this bottom on this wall,” Overton said. “I seen Chase get up (to battle Sheppard) and I remember last weekend at 411 (Motor Speedway in Seymour, Tenn.) I was leading (a Schaeffer’s Spring Nationals feature) and you get behind them lapped cars and there ain’t much you can do, you’re kind of a sitting duck.

“So when they tore out, I just kind of sat by there and saved for a little bit. When I seen them start catching traffic I kind of got up to the top and got back up there.”

After snatching second from Sheppard and stalking Junghans for several circuits, Overton saw his opportunity to seize control just after the halfway mark. He dived to the inside of turn three and pulled off a three-wide pass of Junghans and the lapped Casey Roberts of Toccoa, Ga., to assume command for good.

“I knew it was about to be a little hairy there,” Overton said of his winning move. “I just kind of entered as straight as I could and made sure I got a good run coming off four. I’d say that’s what won me the race.”

Junghans was unable to recover — and in victory lane afterward, his terse appraisal of the race made it clear that he felt his first WoO triumph of 2019 had slipped through his fingers.

“It’s definitely a good finish from what we’ve been doing lately, but I wanted to get that win,” said Junghans, who hadn’t finished better than seventh in five starts since his April 19 Lucas Oil Midwest LateModel Association-sanctioned win at Davenport (Iowa) Speedway. “I kind of feel like we got that taken away by a lapped car, but that’s how it goes sometimes. We’re just gonna build off it.”

Overton was also hopeful of using his Cochran performance to build some momentum. It was his third overall victory in his first season taking over Rum Runner Racing’s lead driver responsibilities from Joey Coulter, but he was winless since an April 27 Southern All Star Series score at Talladega Short Track in Eastaboga, Ala., and had experienced a fair share of frustration in between his successes.

“It’s been too long,” Overton said with a sense of relief during his post-race interview. “When you’re running bad, it seems like you ain’t won in forever.

“This has been a learning curve for me for sure,” he continued. “I’ve always done it by myself … can’t do nothing but go up from here I hope. The Coulters (who field his equipment), they’ve been more than patient with us. It means a lot to drive for people that let you work it out on your own and try to make the right decisions.”

Notes: Sheppard’s fourth-place finish ended his streak of 10 consecutive WoO outings in which he was victorious (seven times) or placed second (three). His only other finishes outside the top two were a fourth and sixth in Screven’s season-opening doubleheader. … Weiss’s solid third-place run was his fourth WoO podium finish of the season, leaving him feeling that his first-ever win on the national tour is close at hand. “If we keep running up front then the wins should come easily … but nothing’s easy against these guys,” he said. “If we can stay there (near the front), hopefully we’re better than them a couple of these nights.” … Racing one week after celebrating his 44th birthday, Chris Madden of Gray Court, S.C., was set the redraw for a feature starting spot after finishing second in his heat, but mechanical trouble in his Skyline Motorsports car forced him to start at the rear of the feature in his backup machine. He rallied to salvage a 10th-place finish. … Teenager Ashton Winger of Hampton, Ga., recorded a career-best WoO finish of ninth. … Overton completed the caution-free 50-lap A-main in 13 minutes, 32.753 seconds.