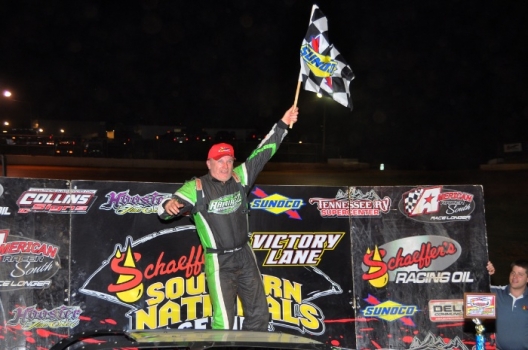 Racing less than an hour’s drive from his residence in Newport, Tenn., Owens drove to a $10,052 victory Monday night in the 52-lap Scott Sexton Memorial at 411 Motor Speedway that closed out the 2019 Schaeffer’s Spring Nationals schedule.

The triumph in what became the Memorial Day weekend’s richest race following the storm-related postponement of the $30,000-to-win Show-Me 100 at Lucas Oil Speedway in Wheatland, Mo., was Owens’s third overall of the season but first in a non-national tour event. (He previously was victorious in Lucas Oil and World of Outlaws Morton Buildings Late Model Series races.) It also made him the seventh different winner in as many editions of the Scott Sexton Memorial, which honors the east Tennessee racer who passed away in 2013 at the age of 46.

Capturing a race contested in memory of a standout driver from Owens’s home territory added more luster to his night.

“I’m honored to win this race for those guys, for that family,” Owens said of Sexton. “We were all really good friends there close to the end. I hated to see him go, but we’re glad to get this win for him.

“I’d always grew up being a fan of Scott,” he added. “I never really got to race with him a whole lot, but we run a few races together. I’d like to got ahold of him when he was in his prime and seen if I could’ve kept up.”

Dale McDowell of Chickamauga, Ga., marched forward from the 18th starting spot to finish sixth, earning him the 2019 Schaeffer’s Spring Nationals points championship. He entered the finale leading Donald McIntosh of Dawsonville, Ga., by 22 points, but, after the two title contenders ran the B-main together and started the feature side-by-side in the ninth row, the points drama didn’t last long.

While McDowell, 53, experienced a scare on lap 11 when contact with another car sent his Sweet-Bloomquist car spinning between turns one and two, he regained control without coming to a halt and restarted in the position he was running. The 26-year-old McIntosh, meanwhile, sustained right-front bodywork damage to his Blount Motorsports mount in the chain-reaction scramble behind McDowell, pitted for hasty repairs and never threatened to climb high enough to steal the crown as he finished 15th.

“It’s enjoyable. We had a good time,” McDowell said of his $10,053 Spring Nationals championship, his first touring series points title since he won the 1999 Hav-A-Tampa Dirt Series. “Tonight I didn’t do a good in qualifying. That kind of buried us back. We got beat and banged up there a little bit (early in the feature), and I was kind of worried I got turned around, but I didn’t stop so we didn’t have to go to the rear. We got back to sixth, but I felt like we had a better car than that.”

McIntosh won three times in the 11 Spring Nationals events contested — matching McDowell’s win total for the tour’s lead in the category — but fell short of the championship. He experienced a rough night but remained positive afterward.

“Last night (at Georgia’s Rome Speedway), we were able to win, but we had a little bit of a misfire at the end of the race,” McIntosh said. “We thought we had it fixed (but) we come out here for hot laps and we had that same misfire, so we ended up changing cars and were thrashing around trying to get this car ready. We were a little bit behind all night.

“It’s been a fun deal,” he continued. “It’s hard to be upset. I still want to be able to hold my head high. These guys give me a great race car and to come that close (to the title), especially against someone like Dale, it’s pretty special.”

Owens proved to be the class of the feature’s field. Though he didn’t jump out to the lead at the initial green flag from his pole position starting spot because Overton came off the outside of the front row to grab the point, he calmly chase Overton until making his decisive move while negotiating lapped traffic shortly after the halfway mark.

With Overton noting afterward that his car developed a tight handling condition, Owens stepped away from his 27-year-old rival in the closing stages to record his second career victory on the Spring Nationals tour.

“Brandon’s really good down here and really good on these slick tracks,” Owens said. “Anytime you can beat him, you gotta have your ducks in a row.”

Overton conceded that he didn’t quite match Owens’s speed.

“I just got too tight in,” said Overton, who finished third in the Spring Nationals points standings. “I think I pushed the right-front off. I just couldn’t steer, and then when I couldn’t steer it’d send the ass end out and I’d just slide. We just missed it a little bit.”

Weiss, 30, might have had a car capable of challenging Owens’s old on the top spot — if, of course, he had gotten a chance to restart close to him in the closing circuits.

“We started hooking up — the slower the track got, the better we got,” said Weiss, whose chassis builder, Scott Bloomquist, was at the track providing technical assistance as he continues his recovery from a March motorcycle accident. “If we could’ve had a late caution, I think we would’ve been able to challenge Jimmy for the win.”

Two caution flags, both on lap 11, slowed the race. The first came when Tanner English’s Big Frog Motorsports car came to a stop in turn four as he ran in seventh place. Then, on the restart, McDowell’s spin set off a tangle that left Walker Arthur and Joseph Faulkner sitting in turn two.

Notes: Owens’s lone previous Spring Nationals triumph came on March 14, 2014, at Volunteer Speedway in Bulls Gap, Tenn. … Lucas Oil Series regular Tim McCreadie of Watertown, N.Y., entered the event in his Sweeteners Plus-backed Longhorn house car but had a quiet night. He qualified through the B-main and wasn’t a factor in the feature; after slowing between turns one and two and falling to the back of the pack on lap 12, he ultimately went a lap down and finished 13th. … Another Lucas Oil traveler, Kyle Bronson of Brandon, Fla., recovered from a flat tire to finish second in his heat race and place seventh in the feature. … Ross Bailes of Clover, S.C., started third in the feature and ran among the top five early, but after the lap-11 cautions he slipped from contention, finishing ninth. … Among the entrants was John Blankenship, the former West Virginia resident now living in Knoxville, Tenn., who made his first start in several years. Driving a Van Lester-owned Longhorn car with his former crew chief Tom Buckingham calling the shots, he experienced problems in his heat and didn't qualify. … The race was co-sanctioned by the Schaeffer's Oil Iron-Man Late Model Series.