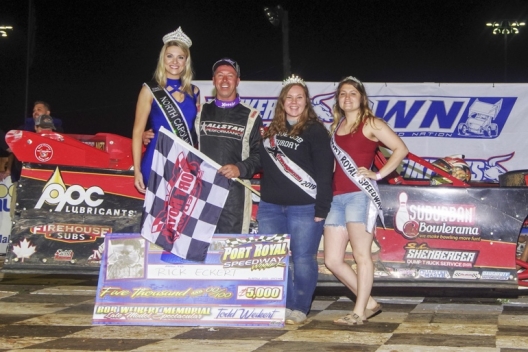 Brian Rhoad/wrtspeedwerx.com
Rick Eckert won Sunday's nightcap for a $5,000 payday.
What won the race: Denying Dylan Yoder one of the richest wins of his career, Rick Eckert of York, Pa., overtook the young Selinsgrove, Pa., driver for the lead on lap 31 and pulled away to claim a $5,000 victory in Sunday's 35-lap Bob Weiker Memorial Super Late Model feature at Port Royal Speedway. Yoder had dominated until a lap-27 caution, tightening the field and allowing Eckert to immediately shoot past Mason Zeigler for second and then overtake Yoder four circuits later for a dramatic triumph.
Quotable: "We made some changes because we weren't very good in the early feature," Eckert said. "I made some changes before the feature there and I wasn't sure if we were going to be good or bad. Austin (Hubbard) had the race won if the caution didn't come out. The caution killed him. I knew we were on different tires and his tires were dying as we were getting closer to him. But Mason (Zeigler) was between us. Luckily, I got by Mason on that restart."
Key notes: Eckert, who scored his third win in seven starts this season with his self-owned operation, pulled away over the final circuits to defeat Dylan Yoder by 2.180 seconds. ... It was Eckert's seventh career victory at Port Royal. ... After winning Saturday's held-over feature earlier on Sunday, Mason Zeigler ran second for the first 27 laps of the nightcap. He faded to seventh at the finish after the race's lone caution flag flew for debris. ... Jason Covert made a late charge to place third. ... A red flag was needed on the original start after Kyle Lee was spun into the inside wall on the homestretch and collected Brett Schadel, Glenn Elliott, Shaun Jones, Andy Haus and Dillan Stake. No one was injured. ... The program was put under a rain delay at 8 p.m. just as sprint car heats were starting. Action resumed at 10 p.m. and the Late Model feature ended at 12:51 a.m. ... The event honored late sprint car owner Bob Weikert, whose Weikert Livestock No. 29 machines were driven by many top competitors in central Pennsylvania.
On the move: Dan Stone of Thompson, Pa., started 13th and finished fourth.
Winner's sponsors: Eckert’s self-owned Rocket car has a Jay Dickens engine and sponsorship from ppc Lubricants, Drydene Oil, Shenberger Dump Truckk Service, Firehouse Subs, Suburban Bowlerama, M&M Painting & Construction, Eckert Trucking, All-Star Performance, Hoosier Tire and AllAboutWraps.net.
Points chase: Dylan Yoder entered the weekend leading the track's standings.
Current weather: Partly Cloudy, 63°F
Car count: 35
Fast qualifier: Jason Covert
Time: 19.857 seconds
Polesitter: Tyler Bare
Heat race winners: Gary Stuhler, Michael Norris, Tyler Bare, Rick Eckert
Consolation race winners: Andy Haus
Editor's note: Results and race details are unofficial.