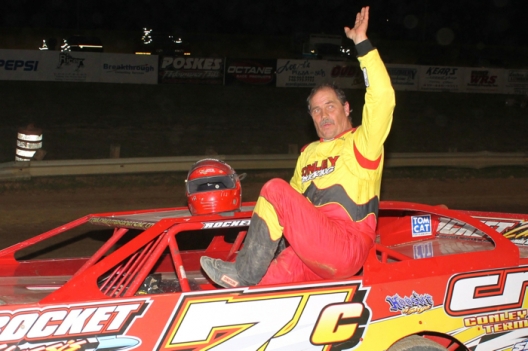 ALMA, Ohio (July 27) — R.J. Conley of Wheelersburg, Ohio, ran down early race leader Brandon Kinzer at Atomic Speedway on Saturday and rode the high side to a $5,000 victory in the inaugural Valley Chevrolet Atomic Blast.

"Wow! I don't know if anyone was running the same line as me, but I thought I was in trouble through (turns) three and four for 39 laps,” said the 50-year-old Conley, whose only other 2014 victory came at Atomic on April 12. "I wondered where some of those guys were (behind me). I was too tired to get my foot off the gas, so I just held it down."

“This Rocket Chassis was really working for us. At the end I saw the checkered and looked at the gauges and it was 280 degrees, but Draime builds a great engine. It's been that hot before and it got the job done tonight.”

Drama started to unfold early when fast qualifier Jason Montgomery experienced possible engine problems and elected to start on the tail. That bumped R.J. Conley up to sixth from an originally scheduled eighth starting spot and got him headed in the right direction.

Kinzer took the lead at the outset over his fellow front-row starter, Casebolt, while an early caution appeared when Duane Chamberlain of Richmond, Ind., popped a tire off the rim. He ducked to the infield for another tire in what turned out to be the only caution of the 40-lapper.

Kinzer kept control early while Conley made a fifth-to-second move on the sixth lap to succeed Casebolt in the runner-up spot. Conley turned up the heat on Kinzer, twice diving low before the halfway point. Conley then moved to the high groove, ram-rodding through turn three with sparks flying off the wall to blast by Kinzer exiting turn four on lap 22.

Kinzer tried to fight back, but Conley turned on the afterburners and pulled away while Casebolt took the second spot from Kinzer on lap 32.