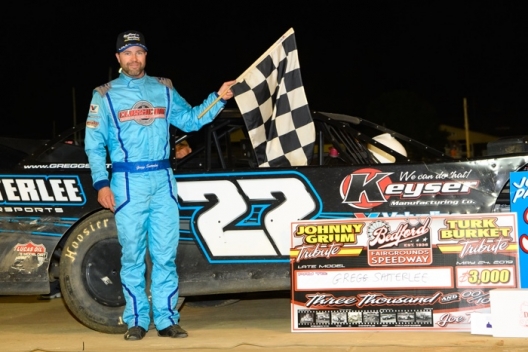 Jason Walls/wrtspeedwerx.com
Gregg Satterlee in victory lane after his $3,000 victory at Bedford Speedway.
What won the race: Holding off a last-lap challenge from 14th-starting Jason Covert, outside polesitter Gregg Satterlee of Indiana, Pa., captured Bedford Speedway's unsanctioned Grum-Burket Tribute. He collected $3,000.
Quotable: “Something about the track’s layout just really fits well into my driving style,” Satterlee said. “Jason gave me a run for the win on the last lap, but I was able to hold him off get the job done. Hopefully we can go back there this Friday and get another big win.”
Key notes: Making his first start at Bedford since September 2016, Satterlee scored his first victory of the 2019 season and the third of his career at the fairgrounds track. His previous victories at the half-mile oval came in 2014 and '15. ... Starting outside the seventh row, Covert made his way up to fourth in eight laps and was running second when a caution fell on lap 23. … Satterlee slipped over the cushion late in the race but was able to maintain his lead despite Covert’s challenges. … Alex Ferree and Michael Norris tangled in turn two to draw a caution on the green flag lap. … A yellow flag waved on the first lap when Mason Zeigler slowed to a stop. … Matt Sponaugle trigered a lap-eight caution when he suffered a right-rear flat. … A yellow flag flew on lap 23 when Ralph Morgan Jr. slowed to a stop in turn two and another fell on the ensuing restart when Tyler Bare and Ross Robinson tangled and collected Dan Stone and Chuck Clise. … Dylan Yoder slowed to a stop in turn two to draw a caution on lap 24 and Dan Angelicchio slowed with a flat tire on lap 26. ... Bedford will host the Mason Dixon Shootout Series on Sunday for a $1,000-to-win Memorial Day Salute.
On the move: Covert, of York Haven, Pa., started 14th and finished second.
Winner's sponsors: Satterlee’s Rocket Chassis is powered by an Andy Durham Racing Engine and sponsored by Satterlee Petroleum Distributors, Keyser Manufacturing, Classic Ink and Valvoline.
Points chase: Entering Saturday's event, Jeff Rine of Danville, Pa., topped Bedford’s Super Late Model standings.
Current weather: Mostly Cloudy, 70°F
Car count: 25
Polesitter: Jeff Rine
Heat race winners: Mason Zeigler, Gregg Satterlee, Darryl Hills
Editor's note: Results and race details are unofficial.