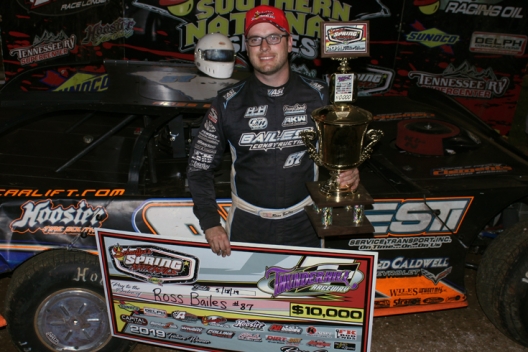 SUMMERTOWN, Tenn. (May 18) — Passing race-long leader Dale McDowell of Chickamauga, Ga., as they raced through traffic on lap 37, Ross Bailes of Clover, S.C., went on to win Saturday’s Schaeffer’s Spring Nationals stop at Thunderhill Raceway. Bailes pulled away over the final 23 circuits to win by 2.064 seconds ahead of McDowell.

Bailes collected $10,000 for his first career Spring Nationals triumph. It marked the third five-figure payday he has enjoyed this season.

“Up until this year, I think I only had two five-figure paydays,” said Bailes, who was making his first start at the high-banked Middle Tennessee oval. “We’ve been fast all year. We started off good and I think we’ve gotten even better. We’ve already knocked off a bunch of firsts for me (this season). The World of Outlaws win, Lucas (Oil Series win) and now Spring Nationals. We were good back when I drove (for Barry Wright) back in ’17 and they got their car better and I got a little bit better behind the wheel. I mean, it’s just clicking right now.”

McDowell had the field covered in the first half of the 60-lapper. From his pole starting position, he bolted into the lead and pulled away to nearly a straightaway advantage over second-running Donald McIntosh of Dawsonville, Ga. Fourth-starting Bailes quickly moved to third ahead of Brandon Overton of Evans, Ga., before working his way around McIntosh following a restart on lap 12.

As McDowell closed in on the rear of the field, Bailes crept closer to the leader. Catching McDowell as he tried to get by Shelbyville, Tenn.’s Scott Cook, Bailes went to the outside down the backstretch and split the two as they rolled through turns three and four.

“Dale probably had half a straightaway lead or something like that,” said Bailes. “He’d slowed down a lot when we got in lapped traffic and I was like, well, I’m gonna try something. So I went up top and it had already took rubber down at the bottom, but we’d already slowed down so much that when I went up top I was able to keep my momentum up and I was able to get by him. He didn’t really do anything wrong, other than we’d slowed up a lot and he was kinda being a little too patient I thought.

“Running second helped me because I could see that he was being too patient. I could see that I could make ground up on the high side versus him being in the rubber following the lapped cars. This track was real wide. When you got a chance, you just had to take it. You had to slide ‘em … you had to do whatever you had to do to get by ‘em so you could get one car in between you.”

Early in the race, McDowell felt as though he was in prime position to pick up his fourth series win of the season. But as the bottom groove became more and more dominant, he knew his Sweet-Bloomquist Race Car wasn’t working quite the same.

“In the slick it was good. When the racetrack rubbered up, I think, as good as I was in the slick, we were a little tight and got to shearing a little bit to turn the car,” said McDowell. “I just got to that lapped traffic and they were three deep in front of me and when you’re leading, you just don’t know where to go. I went a little bit low and Ross rolled me on the outside. You win ‘em that way when you’re running second because you got now option. I was trying to be safe. I’d already got hit by a lapped car going through there. I was just being a little safe … too safe I guess.”

Hickerson, who is still trying to get adjusted to his new Rocket Chassis, was never in position to challenge McDowell or Bailes. He instead spent much of the race sparring with English before finally securing a spot on the podium.

“We had a real good car,” Hickerson said. “We didn’t really know what to expect with this Rocket. We ain’t never had it over here. We sorta made a good guess when we come over here and sorta tweaked it as the night went on. We kinda knew what the track was gonna do when we went out with that Crate race and they kinda helped us out a little bit. It was just a good run.

“I sorta kept my head screwed on straight. We’ll take third … glad we could keep some of this money here at the house and don’t let these big guys take it all with them.”

Notes: Ross Bailes’s other two five-figure paydays this season came in Lucas Oil Late Model Dirt Series action at 411 Motor Speedway in Seymour, Tenn., on April 5 and World of Outlaws Morton Buildings Late Model Series action at Cherokee Speedway in Gaffney, S.C., on May 3. … Fourteen cars were running at the finish, with 10 completing all 60 laps. … There have been five winners in eight Schaeffer’s Spring Nationals races this season. … McDowell has a series-high three wins, while Donald McIntosh of Dawsonville, Ga., who won both Thursday at Tri-County Racetrack in Brasstown, N.C., and Friday at Crossville (Tenn.) Speedway, has two wins. … Bailes joins Chris Ferguson of Mount Holly, N.C., and Chris Madden of Gray Court, S.C., who each have one win. ... McDowell was celebrating his 53rd birthday. “I was really wanting to bring (a win) home,” he said. “Our EZ-GO hot rod was pretty good and it was my birthday today. I was like, dadgummit, I give it away on my birthday.” … McIntosh pitted on lap 40 with a flat right rear tire. He finished ninth. ... Brandon Overton of Evans, Ga., brought out a caution on lap 12 with a flat right front tire. He returned to finish seventh. “I had a flat before the race started,” said Overton. “I must have run over one of these rocks and poked a hole in it. I felt it when I pulled onto the track. When the race started my car wouldn’t turn. Finally it just blew.” … The series made its first-ever visit to Thunderhill.