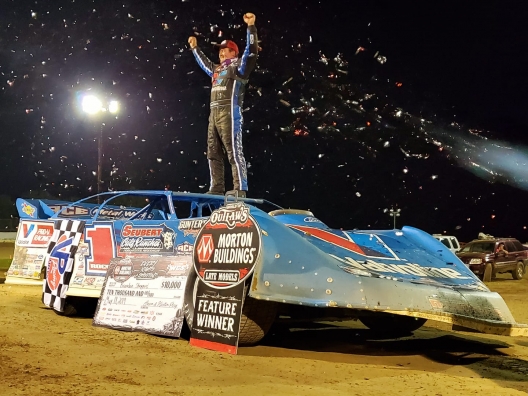 After Lanigan led 45 laps and fought off repeated challenges, Sheppard slipped underneath the Union, Ky., driver exiting turn four on the 46th lap and raced to his third straight national touring victory at the 3/8-mile oval in northeast Ohio.

“It was a lot of fun to race them guys clean and have that tight of a battle,” the third-starting Sheppard told series announcer Rick Eshelman in victory lane after his 44th career series victory. “The championship’s always in the back of our minds, but right now we’re definitely concentrating on winning races, you know. Our team and everybody is clicking right now … I can’t thank them enough.”

Lanigan, the three-time series champion who started outside the front row looking for his first series victory since 2015, faded late to finish 1.9 seconds behind in third with polesitter Dennis Erb Jr. of Carpentersville, Ill., and ninth-starting Doug Drown of Wooster, Ohio, rounding out the top five.

With Lanigan taking command early, Sheppard took the second spot from Erb on the third lap and began chasing the leader, briefly edging ahead in turn two on the 15th lap and pulling within inches of Lanigan at the start-finish line on lap 16.

On the next circuit, Sheppard averted disaster when he jumped high to avoid the spinning car of Brad Malcuit in turn three as the frontrunners put a lap on the veteran driver. Sheppard ended up winning with a low-side move, but he made up ground in the first half of the race on the high side.

“Actually, at the middle of the race there, I felt a little bit better all the way around the top,” the Rocket Chassis house car driver said. “But Darrell’s guys moved him up down there — which was the right thing to do, for sure, because the top I could really get a run off of there. I could hang with him on the bottom, so I was hoping if we got to lapped traffic I could do something.”

With no more cautions the rest of the way, Lanigan faced plenty of traffic while Sheppard gave chase. Drown joined the frontrunners before halfway, moving up to third on the 19th lap.

Sheppard took a high-side shot at Lanigan exiting turn four on lap 23, but Lanigan slammed the door and edged back ahead with the top three within eight-tenths of a second just past halfway.

Lanigan slipped high in turn three on the 35th lap, but Sheppard couldn’t take advantage as he continued stalking the leader into the closing stages. Five laps later, Sheppard took another shot at Lanigan exiting turn two to inch ahead briefly on the backstretch, but Lanigan held on with his lead cut to 0.157 seconds with 10 laps remaining.

Weiss suddenly got into the mix late, triggering Sheppard’s move to steal the top spot from Lanigan.

“We got to a few of them (lapped cars) there,” Sheppard said. “I seen Ricky on the inside of me, and I knew when we got by Blake Spencer there, I was either going to have to make my move or get passed. Luckily it just worked out for us.”

Sheppard felt fortunate to turn back the tour’s leading rookie.

“(When he saw Weiss) I was thinking I better get going, that’s for sure,” the winner said. “He had really good times there in the heat race and he’s been doing a really good job here lately, and keeps getting better every night. He’s definitely one of the up-and-comers in the sport for sure.”

Weiss had struggled in Wayne County’s conditions — a “dirty” surface with blowing dust — but was hot on Sheppard’s heels at the finish.

“It feels good to finally get a top-five run, top-three on a dirty track like this,” the Canadian driver said. “We know we’re real good when it’s blacked off and slick and longer races, so as long as we can stay close to (Sheppard) we’ll be good.”

Lanigan, back on the WoO tour after three seasons with the Lucas Oil Late Model Dirt Series, simply couldn’t hold off Sheppard’s onslaught.

“We’re close, there. We just got a little loose there, couldn’t run that bottom,” he said. “We got up in the lapped traffic around on the top, and (Sheppard and Weiss) were better around the bottom and got me. But it is what it is, they had good cars. We’re working on our stuff and trying to get it better and I think we’ve got a real good piece right now. … You gotta run up front to win, so at least we’re up there right now.”

Notes: Sheppard’s 44th career WoO victory moves him into third place on the all-time victory list behind Josh Richards (76) and Darrell Lanigan (72). … Sheppard’s previous Wayne County victories came in 2017-’18. … He also won in Orrville in 2012 making his debut on the Rocket Chassis house car. … The feature was slowed twice by cautions, first for tail-starting Shane McLoughlin on the first lap and again on lap 17 for Malcuit’s turn-three spin. … Former series regular Devin Moran retired in 15th while driving Tye Twarog’s machine; Moran had been scheduled to compete on the Lucas Oil Late Model Dirt Series in Minnesota, but the race at Spring Valley’s Deer Creek Speedway was rained out. … The WoO tour ran its 652nd race. ... Rookie contender Kyle Hardy of Stephens City, Va., was a no-show at Wayne County; he competed in Selinsgrove (Pa.) Speedway's unsanctioned Ron Keister Memorial, finishing sixth.