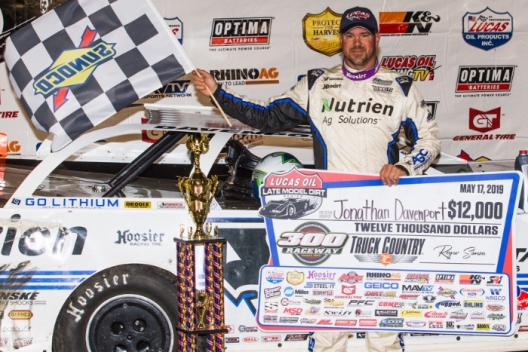 FARLEY, Iowa (May 17) — Just 24 hours after a late-race pass by Hudson O’Neal of Martinsville, Ind., cost Jonathan Davenport a victory at 34 Raceway in West Burlington, Iowa, Davenport made sure no one was close enough to repeat the feat in the waning laps at Farley’s 300 Raceway. Leading all 50 laps, Davenport, of Blairsville, Ga., turned back a mid-race charge from Tyler Erb of New Waverly, Texas, and a pulled away late to win Friday’s Lucas Oil Late Model Dirt Series-sanctioned Truck Country 50.

The second-starting Davenport earned $12,000 in finishing 1.090 seconds ahead of Erb, who started fourth. Devin Moran of Dresden, Ohio, finished third after starting back in 16th, and Josh Richards of Shinnston, W.Va., finished fourth, just missing his second straight podium. Tim McCreadie of Watertown, N.Y., rallied from 20th to complete the top five.

“I drove a hell of a race for 47 laps last night (at 34 Raceway). Hudson (O’Neal) did a great job and congratulations to him last night,” said Davenport, who, after competing on a rugged surface Thursday night, credited his team’s maintenance with Friday’s triumph. “Hat’s off to my crew. I definitely tore it up last night … not on purpose … just rough track conditions. The guys went all through (the car). Nick at Penske, he went all through the shocks and this thing was spot on ever since we unloaded.”

Davenport was second quickest in qualifying behind Brian Birkhofer. But his win in the second heat, put him on the front row of the feature alongside the semi-retired driver from Muscatine, Iowa. After getting the jump on Birkhofer as they raced into turn one on the opening lap, Davenport pulled away.

“This thing’s just been on a rail,” he said. “This is our new car. We’ve been saving it a little bit and I don’t know if it ain’t better than my other one. We really didn’t change anything from the heat race. But we really didn’t hardly change anything from qualifying (either). Our car is so balanced. The Cornett motor is so strong I believe we can set fast time anywhere in the country, as wet as it can be or as slick as it can be right here. It just drives so smooth.”

While ninth-starting Richards charged forward early — he was up to second by lap 15 — and other drivers sorted things out behind him, Davenport’s biggest concern was tire wear. The race was plagued by cautions, many for flat tires.

“After you see that many (tires) going down, I didn’t know if it was rocks or if they was just wearing them out,” Davenport said. “We had a little bit of tire wear in the heat races and even in qualifying, so I was definitely worried about it. But we just checked them out (after the race). We can go another 25 laps. I was trying to conserve tires the whole race, but still go as fast as I could. I think the key was just getting out front. We got the jump on Birky (Brian Birkhofer) there and we could control the pace.”

Erb was almost as consistent as Davenport. But after battling Richards and then Moran, he was never able to get alongside the race leader. He did close to Davenport’s rear deck midway through. On lap 27 Erb was directly in Davenport’s tracks, but couldn’t mount a pass attempt. Still searching for his first series victory since rattling off three Georgia-Florida Speedweeks wins, Erb was pleased with the way his team rebounded from Thursday’s 14th-place finish.

“We just had a bad night last night with the almost flip,” said Erb. “Our car’s been really fast. You just gotta have good luck and be able to not blow a tire here. I got to J.D. there for about 10 laps and kinda raced to his right rear. The tires would come and go, you just had to try to make good decisions. We’ve gotta get good finishes to try to catch up to him, so running second to him ain’t too bad right now.

“I could see he still had tread left. I was really more concerned about the left rears because we were wheel spinning there the first 10 or 15 laps. I tried to be as easy as I could. When I kinda caught up to him there in one of those 10 or 15-lap runs I kinda gave it my all and then just got to racing, you know. The next couple restarts (I was) just trying to maintain second and was able to get back by Devin.”

Moran noted that while racing with Erb it was a late restart that likely cost him a runner-up finish.

“I wish I wouldn’t picked that bottom there on that restart … kinda gave up second,” Moran said. “We had a good car there. The track raced a little different than I expected. It never really cleaned up until right at the end and then it did and it got real wide. It was a lot of fun. It was kind of a tire game. I’d pretty much conserved the whole race, even there at the end. I just didn’t want to risk it going flat out. I don’t know if it’s the way the surface is or what makes it happen, but you seen so many flats. I was just praying for no flats and a good run. Like I said, it raced a lot better than I expected, so kudos to the track crew.”

With his charge from 16th, Moran entertained thoughts that he could possible sweep around Davenport late in the race.

“That’s why I picked the outside (on the restart),” he said. “I thought maybe I could roll J.D. just one shot. I didn’t feel like we were as good as he was, so I just wanted to give it a hail Mary deal and it might of cost me second. But at least I was going for the win. I’m not here to run second or third, I’m here to try to win races.”

Notes: Davenport recorded his sixth Lucas Oil Series victory of the season and 41st of his career. He’s four away from tying Don O’Neal of Martinsville, Ind., for third on the tour’s all-time win list. … Davenport said 300 Raceway (formerly Farley Speedway) reminded him a lot of one of his home state tracks. “This place reminds me of one of my favorite racetracks, (Golden Isles Speedway) at Brunswick, Ga.,” he said. “I drive it just like it, set the car up just like it.” … Like Davenport, Erb said his crew worked tirelessly to make repairs following Thursday’s race at 34 Raceway. “We changed everything on that thing last night from just all the stuff we broke. Definitely want to thank Randall (Edwards) and Colby,” said Erb. “They worked their butts off today. Hope they get a good night’s sleep.” … Tim McCreadie’s rally from 20th to fifth was impressive in that he had to do it twice. T-Mac got to sixth, but pitted with a flat tire and then rallied through the field again. … After starting from the pole, Brian Birkhofer retired on lap 29, finishing 22nd. … Chad Simpson of Mount Vernon, Iowa, finished ninth in the Moring Motorsports No. 1. … Don O’Neal’s night ended with a broken driveshaft; he finished 23rd. … Friday’s race marked Farley’s first Lucas Oil Series race since 2008, when Birkhofer picked up the win.