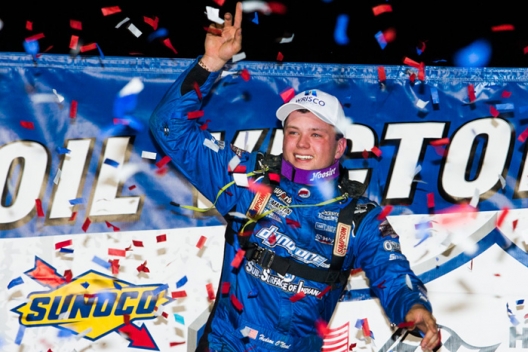 WEST BURLINGTON, Iowa (May 16) — Don O’Neal’s misfortune was just the stroke of luck his son Hudson needed. When the elder O’Neal’s slider with three laps remaining drew contact from race-long leader Jonathan Davenport — bringing out a caution in the process — Hudson was waiting in the wings, ready to pounce on the restart. And pounce he did.

With Davenport restored to the lead, Hudson O’Neal of Martinsville, Ind., rolled by with a tight inside pass following the late caution and eased away for his fourth career Lucas Oil Late Model Dirt Series feature victory Thursday night at 34 Raceway. He survived challenging track conditions and a last-lap rebuttal from Davenport for a 50-lap victory worth $10,000.

Davenport, of Blairsville, Ga., charged turn three on the final lap, but when he hit a hole in the middle of the turn, his car bounced sideways and he could only watch as Hudson O’Neal drove away. Davenport settled for second place — .761 seconds behind the winner — after starting from the pole position and leading the first 47 laps.

“Oh my gosh, I’m out of breath,” said Hudson O’Neal. “It was a bumpy surface, but it made for good racing. You could run all over this thing. (The track) really widened out there at the end and gave us a chance to really make a move there. We weren’t very good in the beginning, but we continually got better and better. Sometimes it’s better to be (lucky) than (good), with dad and (Davenport) getting together. I’ll take one anyway I can get it.

Seventh-starting Josh Richards of Shinnston, W.Va., completed the podium, while Kyle Bronson of Brandon, Fla., rallied from 14th to finish fourth. Third-starting Earl Pearson Jr. of Jacksonville, Fla., who won the Lucas Oil Series visit to 34 Raceway in 2010, rounded out the top five.

Don O’Neal of Martinsville, Ind., pitted after shredding a left rear tire during the contact with Davenport, but returned to salvage a sixth-place finish. During his post-race interview, Davenport was quick to apologize to Don O’Neal for his part in the late accident.

“First and foremost, I’ve got to say sorry to Don. I did not mean to do that,” said Davenport. “As soon as I saw him … you know you can’t see out of these things .. and as soon as he slid in front of me, I lifted and I run over his left rear and it just rolled me up there. Then I tried to get back in the gas to actually get off of him. Anyway, I hate that for him.

“Once we finally got rolling there, I felt like I had a pretty good piece. I could kinda chose my lane, but I was just a sitting duck on the restarts. I didn’t know where to go. Then after me and Don got together, I didn’t know how bad it hurt the nose (of the car) or whatever. I didn’t want to blow in here on the top the first time so I went back to the bottom because I knew they had to be getting a hell of a run down through there to get to me to pass me.”

Davenport earned his paycheck trying to fend off challenges from the O’Neals throughout the 50-lapper. Hudson O’Neal burst into the lead following a restart on lap 29 but Davenport poured on the steam down the backstretch to reclaim the point. Six laps later, Don O’Neal traded sliders with the leader, but each time Davenport managed to pull back head at the flagstand.

“I just never could figure out where to go if I didn’t have a lapped car in front of me to know how good I was getting down the straightaways because the black was getting really, really slick and then you know, you’d bounce through the wrong hole,” said Davenport. “I knew they were running the bottom through (turns) three and four, but I never could find me a line down there to really come off the corner straight because I would bounce again and then I’d hang off of four and that would hurt me all the way down the front straightaway.”

Davenport appeared to have a comfortable lead with four laps to go, but on the next lap he hit a hole in turn four, losing momentum and allowing Don O’Neal to close the gap and get a great run into turn one. But when the two made contact, the door suddenly swung open for Hudson O’Neal, who was glad to see the restart go to single file after the final caution.

“I liked the single file restart. I didn’t like having to chose (a lane earlier in the race) because either was a disadvantage really,” said Hudson O’Neal. “The top was good at the beginning and then the bottom was good, so it was just really hard to tell. If someone got a good restart, they’d just drive right by you. I’m really, really happy that we had a single-file restart there to kinda even us all out and give me a fair chance anyways without having to mess with somebody else.”

There was no one close enough behind Hudson O’Neal in the waning laps for him to need worry. Richards restarted third with three laps remaining, but had his hands full with Devin Moran of Dresden, Ohio, who nearly got into him in turn two. Richards pulled away unscathed, however, to finish third, while Moran slipped to 10th.

“We had a good car early and we kinda drove our way up to third and was battling Don there for second,” said Richards. “We kept getting shuffled back on those restarts and I kept bottoming out pretty bad through those holes. We were definitely way too tight for the condition. I would (rather) see (these track conditions) seven days a week than a one-laned track. It builds character. It’s hard on the equipment, but it makes it a lot of fun.

“We haven’t had the finishes. We’ve had a lot of speed lately, we just gotta try to pull off some finishes. I know we didn’t win, but we’re beside J.D. there at the end. We had a pretty solid car.”

Notes: The race was slowed by 10 cautions and took just more than 45 minutes to complete. … Hudson O’Neal’s last series win came Feb. 7 at East Bay Raceway Park in Gibsonton, Fla. His other two tour victories came in 2018 at Magnolia Motor Speedway in Columbus, Miss., and Florence Speedway in Union, Ky. … Tenth-starting Tim McCreadie of Watertown, N.Y., brought out the first caution on lap two thanks to a flat left front tire. He finished 20th. … Billy Moyer Jr. of Batesville, Ark., had a solid run come to an end due to a broken rearend with three laps remaining. He dropped to 11th. … Moran had an up and down night. After getting caught up in an accident on lap 23, he rallied from the rear back to fourth only to hit a hole in turn one with two laps remaining, dropping him back to 10th. … Jason Jameson of Lawrenceburg, Ind., had to go to a backup car to start the main event. He took a provisional and eventually finished 15th.