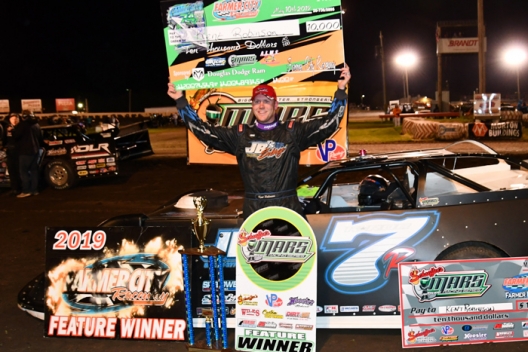 Overtaking O’Neal on a mid-race restart to show the way out front at the halfway mark, the fourth-starting Robinson battled door-to-door with Weisser through the final circuits. Shooting ahead down the backstretch to retake the lead as the white flag waved, Robinson took the checkers ahead of Weisser to claim his second straight victory in Illinois action.

“Any time you win is great,” Robinson said. “But when you’re racing for a cause or there’s a little bit more on your shoulders, it just motivates me. It’s what it did tonight and what it’s done since (his April 13 MARS disqualification). I try to delegate my time between all my activities, work and whatnot, and I’ve spent a little more time on my race car in the last couple of weeks. I hope it’s showing. We’ve picked up some speed. I can’t take all the credit, we’ve all put our heads together. But it just motivated me and I think it’s been good.”

It was polesitter Kyle Bronson of Brandon, Fla., charging to the lead at the drop of the green flag, falling to O’Neal in early lapped traffic. With a right-rear tire forcing Bronson to pit on lap 35, Robinson found himself within striking distance of O’Neal, overtaking the teenage driver to assume the point mid-race.

Charging around the high side, O’Neal closed the gap between himself and Robinson to challenge for the lead in the final laps. But disaster would strike with 10 laps remaining in the distance, as O’Neal slipped over the cushion to make contact with the turn-four wall and retire early with front-end damage. Robinson went on to score his third career MARS victory.

“I wanted to take the outside and when (Kyle) Bronson fell out — tough luck for him, that’s no good — but it moved me to the outside and I thought I could probably roll out there and I did,” Robinson said. “I got to the lead and I thought I could just probably set a pace and run the middle of the racetrack with clean air. That worked out and then something happened and I picked up a vibration.

“I didn’t know what it was and I felt like I lost power too. One of the fuel lines had came loose. Luckily it didn’t erupt into flames. I lost fuel and that’s when I kind of slowed down and I was just trying to hang on. I couldn’t run the bottom of three and four like I wanted to. I knew there was grip down there but I couldn’t do it. I wasn’t set up for it.

“One time, whenever I heard somebody going into three and in between three and four, I looked down and I’m pretty sure I saw Hudson’s (O’Neal) roof when he about flipped over, I believe. Then I was like, ‘I’m not going to give this one away,’ and I got up on the wheel a little further. It all worked out.”

“We were so close,” Weisser said after the race. “I got past Kent Robinson there with a few laps to go and we got in that rut down there in three and four and just kind of upset the car and he got back around me. But other than that, it was an awesome finish. I was just pumped to make the show, let alone to finish top three. To finish second, I was super pumped. We’re going to Fairbury tomorrow and we’re going to see how we can do over there too.”

Lanigan and team made the last-minute decision to travel to Farmer City after the weekend’s World of Outlaws Morton Building Late Model Series action at Fayetteville (N.C.) Motor Speedway was rained out. Rounding out the podium over a 52-car field was a good way to start the weekend, he said.

“I do like coming up here,” Lanigan said. “You’ve got to have a car that’s got a lot of dig in it. We were trying to practice some stuff here tonight for later on next week and stuff and it seemed like it worked pretty good. … This is an unbelievable field of cars here tonight. To come home third starting 18th, we’ll take it.”

After being in position to win the race, the 18-year-old O’Neal was obviously dejected after recording a 17th-place finish in Friday’s show. While his charge brought fans to their feet, he chalked up his late-race rally and contact with the wall to his own inexperience.

“Once we got to racing there, the car kind of drove away from me and I kind of got in a rhythm there,” O’Neal said, reflecting on his run. “It’s a long race, 74 laps, so I was just trying to get in a rhythm and just save my stuff and not hurt my stuff too early. Then we got by (Bronson) in lapped traffic and I led a couple green laps and I felt really good.

“As we went on, Kent (Robinson) got by me and I was like, ‘Man, this is it. I don’t really have anything for him.’ And then we got to searching around there pretty good and we found a little something through the middle all the way around. That really propelled us to get back to him. Then I found that top and I was like, ‘This is it. This is how I’m going to get by him.’

“That bottom, I was maintaining and maybe gaining a car length here and there. But it wasn’t going to win me the race. I found the top and I was like, ‘This is it. This is how I’m going to win this race.’ So I just got up there and I gave it all I had and we came up short. Young and dumb, I guess you could say. That’s what I’m more mad about than anything. We had a race car to win this thing and we ended up not even finishing. Where a veteran might have avoided that hole, I was running straight through it.”

Notes: Robinson captured his second straight victory, winning the May 4 FALS Cup event at Fairbury (Ill.) American Legion Speedway. … Robinson was the apparent winner of the April 13 MARS event at Brownstown (Ind.) Speedway but was later disqualified because of a failed tire test. … Tyler Erb rallied to finish seventh after getting collected in a mid-race tangle while running third. … Former race winner Shannon Babb failed to qualify for the feature after suffering mechanical issues in time trials. … The event was co-sanctioned by the Sunoco American Late Model Series. … Trevor Gundaker won the Crate Late Model feature.