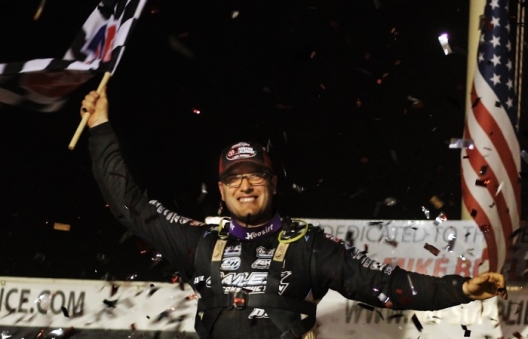 Not only did the rising 29-year-old star claim his first-ever triumph on the WoO circuit — and at a track in his home state, no less — but he became the third driver this season to win A-mains on both the WoO tour and the Lucas Oil Late Model Dirt Series, joining national touring series stars Brandon Sheppard of New Berlin, Ill., and Jimmy Owens of Newport, Tenn.

What’s more, Bailes, who on April 5 drove his Barry Wright Race Cars house car to his first career Lucas Oil Series checkered flag at 411 Motor Speedway in Seymour, Tenn., survived a last-ditch bid by the red-hot Sheppard in the final laps to emerge victorious. After Sheppard’s initial challenge was stopped by a caution flag on lap 45, Bailes controlled the remaining circuits to beat the 2017 WoO champion and current points leader’s Rocket Chassis house car by a slim margin of 0.540 of a second.

“I mean, this is just unbelievable,” Bailes said, calmly speaking in victory lane as he came to grips with the fact that he won for the first time on both national series in the span of a single month.

Don O’Neal of Martinsville, Ind., finished third in the Clint Bowyer Racing XR1 Rocket after working his way forward from the ninth starting spot. He entered the event after the weekend’s Lucas Oil Series doubleheader in Tennessee and Kentucky was postponed on Thursday due to wet weather.

Bailes even handled an acknowledged Cherokee master in Madden, bursting off the outside pole at the initial green flag to grab the lead from the WoO regular who calls the half-mile oval his home track. He went on to build a comfortable edge of up to 2 seconds during the race’s longest stretch of consecutive green-flag racing — laps 3-27 — before Sheppard summoned the speed for a late run.

Sheppard, who started fifth, reached second place with a lap-19 pass of Madden. He turned up the wick after lap 40, pulling right up on Bailes’s rear bumper on lap 45 just as the last of the feature’s six caution flags was displayed for a tangle between turns three and four involving Jacobs Hawkins of Fairmont, W.Va., and Lucas Oil Series regular Devin Moran of Dresden, Ohio.

Bailes knew Sheppard was on the charge, but he staved off DirtonDirt.com’s No. 1-ranked driver with a fortuitous groove change.

“I’m glad Lance (Wright) was spotting for me,” Bailes said. “He told me to start going to the top up here in (turns) three and four and I think if I wouldn’t have done that Sheppard would’ve got by me.

“I wanted to stay on the bottom just to protect my tires because I knew if I got up there (in the outside lane) it would hurt ‘em pretty bad. But then Lance signaled for me to move up at just at the right time. Once I got up there I felt really good.”

Bailes was confident in his machine from start-to-finish, though. He never missed a beat all night, sweeping the program with his first-ever WoO fast-time honor and a heat win preceding his feature run.

“I gotta thank Barry and Lance,” Bailes said of the father-and-son chassis builders who prepare his equipment. “This car is absolutely flawless. We’ve been fast all year. They tweaked on it a little bit this week and got it even better and it just fits me perfect now.”

Sheppard, 26, didn’t get the break he needed down the stretch to register his seventh win in 11 WoO A-mains this season.

“I needed some little bit longer runs to really get going,” said Sheppard, who has six wins and three runner-up finishes since starting the 2019 WoO season with runs of sixth and fourth. “But we had a really good race car again tonight. Another second place, we’re definitely not disappointed with that.

The most significant of the feature’s six caution flags came on a lap-three restart when Lucas Oil Series regular Josh Richards of Shinnston, W.Va., saw his attempt to grab second place from Madden disintegrate when he went spinning off turn two due to contact from Madden. Richards had slipped ahead of Madden through turns one and two, but, as Madden powered off the outside of turn two, he crunched Richards’s right-rear quarter-panel and the five-time national touring series champion twirled. Trent Ivey, Joey Coulter and Dennis Erb Jr. were collected in the ensuing pileup but only Ivey’s car was towed off.

Notes: Bailes became the 47th driver all-time to win on both the WoO and Lucas Oil tours. The last driver to join the club was Tyler Erb of New Waverly, Texas, who captured his first race on both series in a 15-day span last September. … Bailes’s $10,800 top prize included the $500 WoO Bonus Bucks for being the highest finisher who hadn’t previously won a series A-main and a $300 fast-time bonus. … It was Bailes’s third overall victory since becoming the regular BWRC house car driver at the start of the campaign. He’s won on three different series with his April 26 Ultimate Southeast Super Late Model Series score joining his national tour checkered flags. … Don O’Neal had a simple comment after finishing third in his unexpected Cherokee visit: “We needed this good run tonight.” It was just his second top-five finish in eight starts since February’s Georgia-Florida Speedweeks. … WoO rookie Kyle Hardy of Stephens City, Va., retired from the feature after a single lap due to terminal engine trouble. … Lucas Oil Series points leader Jonathan Davenport of Blairsville, Ga., joined the field at a track he knows well after his tour’s doubleheader weekend was postponed but had a short night. He spun entering turn one while battling for second with Johnny Pursley during the third heat and collected Devin Dixon, Jeff Smith and Devin Moran; he retired from the prelim and didn’t come out for the B-main. … The WoO circuit returned to action following a four-week hiatus. … Cherokee hosted the WoO for the third time in series history. … A forecast of thunderstorms prompted the early postponement of Saturday night’s scheduled WoO stop at Lavonia (Ga.) Speedway. The event was rescheduled for Oct. 3.