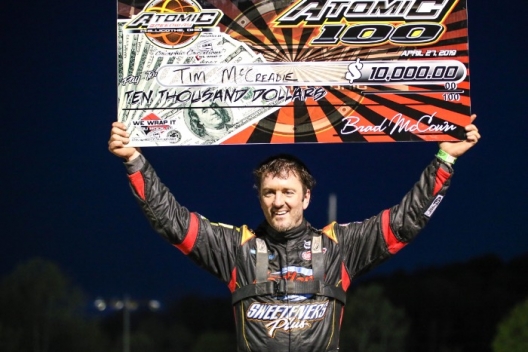 After a flat tire on the final lap of his heat race forced him to start 19th in Sunday’s 100-lapper at Atomic Speedway, McCreadie overtook polesitter Tyler Erb of New Waverley, Texas, on the 55th circuit. Leading the rest of the way, McCreadie outran Kyle Strickler of Mooresville, N.C., to capture his first victory of the 2019 season.

“It’s amazing,” McCreadie said in victory lane. “When you have bad luck, you just keep trying. We broke down Friday night. This morning the batteries were dead on the truck. I lowered the door down too far and messed a screw up. I thought, ‘Somebody’s telling us we don’t need to be running this car.’ But now I know why they didn’t want us in it because that was pretty fun tonight.”

It was Erb charging out to the front of the field at the drop of the green flag, falling to fourth-starting Freddie Carpenter of Parkersburg, W.Va., in the early running as Carpenter shot ahead down the backstretch. After holding a comfortable lead, disaster struck for Carpenter on lap 29 as he slowed and retired to the infield pit area a few circuits later.

Regaining the lead, Erb showed the way out front, with McCreadie advancing from mid-field to run in fourth. Continuing his charge, McCreadie challenged the race leader just shy of the halfway mark, overtaking Erb when he began to slow with a flat tire on the 49th circuit. Setting a blistering pace through the middle stages of the distance, McCreadie fought back late-race challenges from Strickler to pick up the win in the event twice postponed by weather.

“My guy (Phillip Snellen) was signaling me,” McCreadie said. “I seen that Kyle (Strickler) must have been doing something different in (turns) one and two. I bicycled three or four times down there early and I thought, ‘Man, don’t charge in and roll this thing over leading.’ I just tried to slow down getting in and get a little wider and maybe gain some speed up off.”

Strickler finished runner-up, with Devin Moran of Dresden, Ohio, running third. Rallying back to the front of the field, Erb finished fourth, with Tyler Carpenter of Parkersburg, W.Va., rounding out the top five after suffering a late-race flat tire.

McCreadie and the Rumley team had initially planned to make their debut in Friday’s Southern All Stars event at Smoky Mountain Speedway in Maryville, Tenn., but suffered hauler problems en route to the racetrack. With guidance from Rumley, McCreadie will return to his familiar No. 39 for May 3-4 Lucas Oil Late Model Dirt Series events at Tazewell (Tenn.) Speedway and Florence Speedway in Union, Ky.

“Kevin (Rumley) has helped us out with our own car the last couple of weeks and I’m glad I could do him and his dad and his whole family and Dave justice by putting it up front," McCreadie said. "It didn’t look like it for a while. But we got there in the feature. I thought, ‘We freed this thing up enough, it feels pretty comfortable in the holes.’ So hats off to the guys that prepare the No. 6 car.”