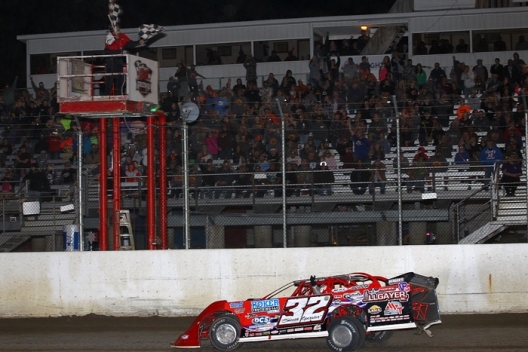 After grabbing the lead early in the distance and rolling to convincing victories in the 2014 and ’16 events, Pierce took a different route to the $10,555 first-place payoff in Saturday night’s 11th annual 50-lapper. The 22-year-old star from Oakwood, Ill., made one of his trademark late-race charges, overtaking Shannon Babb of Moweaqua, Ill., for second place on lap 32 and then chasing down Chad Simpson of Mt. Vernon, Iowa, to make a winning pass with seven circuits remaining in the Lucas Oil Midwest LateModel Association-sanctioned affair.

Pierce steered his family-owned XR1 Rocket car under the checkered flag several lengths ahead of Simpson, denying the home-state driver a victory in what was his second start fielding his own Black Diamond machine. Simpson led laps 29-42 before losing his momentum on the inside of the track while negotiating lapped traffic, allowing Pierce to soar off the top of turn four and assume command for good.

“Man, that was really a tough race,” Pierce said after his seventh overall win of 2019. “Probably one of the funnest races I ran. Those guys did an awesome job up there.”

Pierce, who started fourth, took more than half the race to really get rolling. After overtaking Chad Simpson for second with a turn-two slider on lap 14 only to cede the spot back on the 16th tour when he bobbled on the cushion rounding turns three and four, Pierce didn’t get back into the bridesmaid slot until lap 32 when he took advantage of Babb’s trouble in the same spot on the 3/8-mile oval.

“It might have taken 30 laps or so for my front tires to get warmed up,” Pierce related. “Running on this hard tire rule is a little different, so all night it kind of felt a little slimy until the track really got black like these tires like.”

With his mount picking up speed, Pierce caught Chad Simpson in lapped traffic on lap 41. When Simpson moments later found himself behind the slower Hudson O’Neal of Martinsville, Ind., sliding through turns three and four, Pierce powered around the vacant outside groove to vault into the lead as lap 43 was scored.

“I think Chad’s tires must have started going away there at the end because it just seemed like he wasn’t as fast as he was at the beginning,” said Pierce, whose most recent MLRA-sanctioned triumph was the May 28, 2017, Show-Me 100 at Lucas Oil Speedway in Wheatland, Mo. “And the top, I don’t think it got faster, it’s just I think that bottom might have got slower.”

Simpson, 40, was disappointed with his personal performance after finishing second. It was a career-best run in the Slocum 50 for the two-time MLRA champion, who is beginning his first year as an owner-operator following the retirement of his longtime car owners Bud and Denise Brinkman.

“I think I just gave up on myself out there,” Simpson mournfully said during the post-race ceremonies. “We started on the pole for this thing the last three years and I keep thinking to myself we’re getting closer and closer. We got two thirds and we finally got a second, but …

“Hat’s off to Bobby. He did what he had to do. He was in the right place there. I just got to racing those lapped cars too much. I took my focus off going as fast as I could when I got to racing with them guys and it gave him a shot to get around me.

“At the end of the day,” he added, “I just needed to get up on the wheel and drive those last six laps and not mess with the lapped cars.”

Babb, 45, came off the outside pole to outgun the polesitting Chad Simpson for the lead at the initial green, but the tricky top lip of turns three and four proved to be his downfall. His XR1 Rocket car twisted out of shape twice at the top of the track, first on lap 29 to open the door for Simpson to grab the lead and again on lap 32 when he gave up second to Pierce.

“I was struggling down here in three and four, I couldn’t figure it out,” Babb said. “I was way too tight and the hole got me in the fence. I was trying to go above it and that wasn’t good. Finally, about the last five laps, I found out I could run my right-rear through it and make it around the corner, but anyhow, Bobby was damn good tonight and so was Chad.

“We’re real happy. Anytime you can get a podium finish with this group of cars, you can consider it a good night.”

Three caution flags slowed the race. Kyle Bronson of Brandon, Fla., brought out the first yellow on lap one when contact with another car left his machine with a flat right-front tire and badly bent tie-rod. Subsequent cautions flew on lap 11 for Jay Johnson of Burlington, Iowa (spin in turn four) and the teenage O’Neal (flat left-rear tire).

Notes: Pierce was thrilled to post another victory in the Slocum 50, an event that pays tribute to late Iowa racer Brent Slocum. “The Slocum 50 is definitely one of the races I always look forward to coming to,” he said. “Last year I missed it with running the Lucas (Oil) Series, so glad to be back here and pick up another win.” … Garrett Alberson, a Las Cruces, N.M., racer who serves as the crew chief of Lucas Oil Series regular Earl Pearson Jr.’s Black Diamond house car team, drove one of the Black Diamond operation’s No. 1 machines to a sixth-place finish after starting 12th. … Lucas Oil traveler Tyler Erb of New Waverly, Texas, started 10th and gained a couple spots before the battery quit in his Best Performance Motorsports car. … World of Outlaws Morton Buildings Late Model Series points leader Brandon Sheppard of New Berlin, Ill., entered the event in his family-owned No. b5 but was never a factor before retiring early. … J.C. Wyman of Griswold, Iowa, flipped his car between turns one and two during heat action, coming to rest upside down. He wasn’t injured and came back late in the evening to start the feature using a provisional spot. … Payton Looney of Republic, Mo., was scheduled to start fifth in the A-main, but engine trouble forced him to drop to the rear of the field and merely take the green flag before pulling off. … Chase Junghans of Manhattan, Kan., who won the previous night’s MLRA event at Davenport (Iowa) Speedway, finished a quiet ninth after starting 19th. … Brian Birkhofer of Muscatine, Iowa, entered the evening’s action in a black car carrying the unusual No. OV812. He contacted the wall during qualifying, however, and never came out for his heat race. … The MLRA tour sanctioned the Slocum for the second consecutive year. … With a big crowd on hand, the winner’s share of the 50-50 raffle was a robust $3,355.