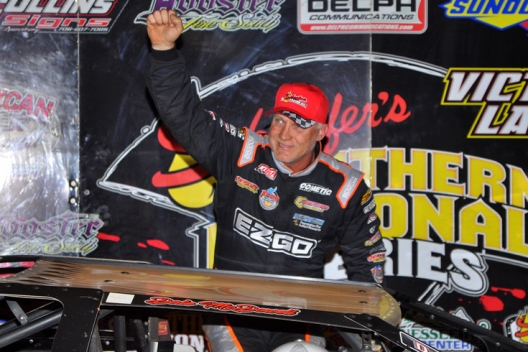 MARYVILLE, Tenn. — Continuing his red-hot Spring, Dale McDowell of Chickamauga, Ga., led flag-to-flag Saturday at Smoky Mountain Speedway for his third Schaeffer’s Spring Nationals victory of the season. McDowell had to step out of his comfort zone a bit, but managed to stay just ahead of a furious battle for second between Brandon Overton of Evans, Ga., and Ricky Weiss of Headingly, Manitoba.

Forced to stay up against the cushion throughout the main event, McDowell negotiated the tricky turf with relative ease over the final 25 laps en route a $10,000 payday.

“The racetrack’s a good bit different tonight because of the rain,” said McDowell. “We were better in some conditions and worse like in the middle and the slick, so that kind of married me to the top, which is uncharacteristic for me. But Shane … there’s teamwork there … as Shane would tell me. With the grove moving around it makes awesome racing for the race fans.

“I could kinda somewhat tell because there’d be crumbs in different lanes and different lanes would clean up. But (Shane) would tell me kinda where to go and I just went where it told me and tried to confuse those guys, ‘cause it’s a lot easier to run second and third than it is to lead.”

Overton finally cleared Weiss for good with a handful of laps remaining and took a final stab at the lead in turns three and four on the final lap but settled for second, two lengths short.

From his outside front row starting spot, McDowell took the lead on the opening lap ahead of Strikler, the polesitter. Overton moved into the runner-up spot by lap five, dropping Strickler to third, while Weiss advanced two spots into fourth. McDowell had a .429 second lead on lap 15, but came close to giving it away on the following circuit.

With lapped traffic ahead, McDowell bobbled, allowing Overton to pull to his rear deck. As McDowell caught the slower car of Chicky Barton exiting turn four, he slowed momentarily. Overton turned left and drove under McDowell into the lead as they crossed the stripe. But a split second later the yellow flag waved as Barton slowed, eliminating Overton’s pass as scoring went back to the last completed lap.

“I lost my chance right there when I got (McDowell), you know,” said Overton. “I passed him in traffic and as soon as I passed him the caution come out. But you know, you’ll have that. I should’ve been leading from the get-go I guess.”

Reinstated to the lead, McDowell didn’t make the same mistake twice. After a third caution slowed the pace on lap 21, the race went caution-free over the final 29 laps, during which Overton and Weiss traded multiple sliders. Weiss grabbed second on lap 22. Overton reclaimed the position on lap 27 and chased McDowell to the finish.

“There was a lot of traction off of turn four,” said McDowell. “I couldn’t use it in the race … I couldn’t roll the bottom like I needed to. So I kinda had to get on top and just run the top. I was able to use it on those restarts just to kinda block their lane. I mean, you’re wanting to block their momentum. It was just a deal where you had to go where the car worked best.”

Notes: Dale McDowell earned his series-best 12th career Spring Nationals victory. … McDowell’s other series wins this season came at Oglethorpe Speedway Park in Savannah, Ga., and Talladega Short Track in Eastaboga, Ala. … The win marked McDowell’s fourth overall of 2019, his second paying $10,000-to-win. … Donald McIntosh of Dawsonville, Ga., topped Kyle Strickler by a scant .001 margin in time trials to pick up the fast time honors. ... The race was slowed by three cautions, all in the first 21 laps. On lap six, Ryan Crane slowed with a flat right rear tire — the result of contact with another car in turn four — to bring out the first yellow. Chicky Barton slowed on lap 17, drawing the second yellow. The final caution came out on lap 21 when Colton Horner slowed to a stop. … Joey Coulter made his first start of the 2019 season. … Scott Bloomquist of Mooresburg, Tenn., who was injured in a mid-March motorcycle accident, was in attendance at Smoky Mountain. He watched the action from a wheelchair. … Cory Hedgecock of Loudon, Tenn., won the $2,000-to-win American Crate All-Star Series feature on the undercard.