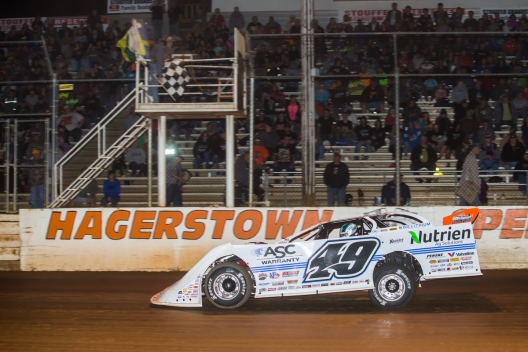 HAGERSTOWN, Md. (April 13) — Jonathan Davenport’s $12,000 victory in Saturday night’s 50-lap Stanley Schetrompt Classic at Hagerstown Speedway was virtually a carbon copy of his win in the half-mile oval’s same Lucas Oil Late Model Dirt Series-sanctioned event last year — that is, a flag-to-flag triumph off the pole that wasn’t quite as dominating as it seemed.

As the 35-year-old driver from Blairsville, Ga., noted after the race when it was suggested that he had a flawless car: “I think it looked a little better than it felt.”

Indeed, Davenport faced nary a sustained challenge en route to his fifth win of 2019 and the 40th of his career on the Lucas Oil Series, but he certainly didn’t cruise care-free to the checkered flag.

“I was struggling in lapped traffic,” Davenport said. “Lapped traffic was hell for me tonight, but we managed to get through it.”

After a well-timed caution flag on lap 25 took him out of slower cars just as Jimmy Owens of Newport, Tenn., had drawn close to him, Davenport went on to lead the remainder of the uninterrupted distance without receiving any serious pressure. Nevertheless, Davenport was unable to rest easy even though he managed to cross the finish line with a final winning margin of 2.497 seconds over Brandon Sheppard of New Berlin, Ill.

“Once we had clean air we was pretty good, I could kind of run my own line,” commented Davenport, who recorded his sixth overall win of the young season and padded his Lucas Oil Series points lead as he chases a second consecutive title. “This place is so unique. You can chatter the back tires and get loose so easy here, especially running behind another car.”

Sheppard, 26, actually had to spend the final circuits holding on for dear life to preserve runner-up money over Owens, who ceded the second spot to Sheppard on the lap-25 restart and settled for a third-place result, about a half-second behind Sheppard. Fifth-starter Rick Eckert of York, Pa., was a few car lengths behind Owens in fourth at the finish in his self-owned machine while Tim McCreadie of Watertown, N.Y., was the race’s hard charger with his advance from the 19th starting spot to nab fifth, though his climbed no higher after cracking the top five on lap 28.

On his way to becoming the first repeat winner in 12 Lucas Oil Series events held at Hagerstown since 2006, Davenport realized just how important “clean air” can be for a driver circling the high-speed half-mile oval.

“I guess when you run behind cars the whole race you kind of get in a rhythm of knowing how much to slow up (for the corners),” Davenport said. “Well, then I’m in clean air (in the lead), I don’t have none of that grip blowing across the racetrack, so I’m pretty much locked to the track and I can determine where I go in the corner. Then, when you get behind somebody (to lap them) and they change lanes a couple times, they slow up before you do and you gotta hit your brakes a little harder than you want to … well, then, if you get loose getting in, then you’re loose all the way through the corner pretty much.”

Davenport built as much as a half-straightaway edge over Owens before his entrance into lapped traffic near the race’s midway point shrank that distance.

“I seen (crew chief) Jason (Durham) close the (signal) sticks up,” Davenport related. “We had like a half a straightaway he told me, and then I knew I was slowing down in that lapped traffic.”

What was on Davenport’s mind as he had Owens, as well as Sheppard and Eckert behind him, close up on him?

“I thought I was definitely in trouble,” Davenport bottom-lined.

Davenport breathed a sigh of relief when Jason Jameson of Lawrenceburg, Ind., slowed to a stop with a broken ball-joint to bring out a caution flag on lap 25.

“I was glad to see that caution,” Davenport said. “I was looking for something to throw out the window. I was looking up ahead. I was like, ‘Man, somebody have a flat! Something needs to happen right here.’ Luckily, we got a caution when we needed it. It was definitely a little nail-biting there in lapped traffic.”

The second half of the race had its share of hairy moments for Davenport as well, including some difficulty putting Don O’Neal of Martinsville, Ind., down a lap.

“There was one (car) in particular car that kept changing lanes right in front of me,” Davenport said, referring to dealing with O’Neal with roughly 10 laps left. “Then I come back to lap him again and when I got up beside him he turned down on me (contact in turn four) and I thought he cut the right-front down so I had to really ease up a couple laps just to make sure it wasn’t going down.”

Davenport’s advantage didn’t dwindle down as much in the final laps as it had earlier, however, because Sheppard was unable to take advantage of the situation.

“Once I got to second, J.D. was in the right line the whole time,” said Sheppard, who started 10th but hustled his Rocket Chassis house car up to third by lap 11 before surging past Owens for second on the lap-25 restart. “He had clean air, was in the right line and he did a really good job. I could never really get close to him.

“I think (Owens) was right on me when we crossed the checkered, but I got to over-driving my car there at the end trying to catch J.D. and wore myself out a little and I was fading there at the end. I think we would’ve been able to make it a little more interesting if we had started up front.”

For Sheppard, though, the outing continued his torrid pace since he capped Georgia-Florida Speedweeks in February with four straight World of Outlaws Morton Buildings Late Model Series victories at Volusia Speedway Park in Barberville, Fla. With his run coming on top of a second-place finish to Owens in Thursday night’s Lucas Oil Series stop at Atomic Speedway in Alma, Ohio, Sheppard has seven wins and four runner-up placings in his last 11 starts on the WoO and Lucas Oil tours.

“We had a really good car again tonight,” Sheppard said. “I’ve only raced here one other time and I wasn’t probably as good, but I didn’t think the track was as racy the last time either. This time I feel like the track was a little bit more racy and it was a lot of fun out there. For being a half-mile, big, slick place, not really much brown to chase, that was a lot of fun.

“I’m not disappointed at all, especially for here. I don’t think the guys had real high expectations for me here, but at the end of the day we’ll take second.”

Owens, 47, was also satisfied with a third-place finish to follow up his first Lucas Oil triumph of 2019 two days earlier at Atomic.

“We had a pretty good car for the feature,” said Owens, who won 2013’s Lucas Oil event at Hagerstown. “We just needed to tweak a little bit here and there. We’re happy to come home with a good third-place finish.”

The lap-25 caution for Jameson was the race’s second and final slowdown. Don O’Neal triggered the first caution on lap six when he stopped in turn four.

The 54-year-old O’Neal pitted after bringing out the yellow flag and then pitted again during the lap-25 caution period. He continued racing following his second pit stop but was black-flagged and not scored anymore because Lucas Oil officials determined that he did not stop for an official at the end of pit road when he returned to the track, costing him one position in the final rundown; he was credited with a 24th-place finish rather than 23rd.