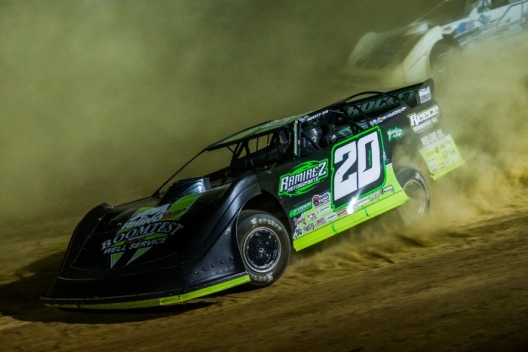 ALMA, Ohio (April 11) — After fighting bad luck early in 2019, Jimmy Owens of Newport, Tenn., has found his groove over the last few weeks. In his last eight starts, the three-time Lucas Oil Late Model Dirt Series champion has notched six podium finishes, two of those culminating in a trip to victory lane.

The second of Owens’s two triumphs came Thursday at Atomic Speedway, with the Tennessee driver dominating the 50-lap Lucas Oil Series-sanctioned Buckeye Spring 50. Shooting to the front of the field when polesitter R.J. Conley of Wheelersburg, Ohio, slipped over the backstretch berm, the third-starting Owens led flag-to-flag, outrunning Brandon Sheppard of New Berlin, Ill., to earn a $12,000 payday.

Owens set a blistering pace early on, stretching his lead to a full straightaway by the 10th circuit. Sixth-starting Sheppard began reeling in the race leader on lap 16, only to have his efforts thwarted when the first caution fell three laps later. Still on the move, Sheppard attempted to slide ahead of Owens in turns one and two on lap 30, with the race leader crossing back ahead to maintain the advantage down the backstretch. It would be Owens’s only serious challenge.

“He’s been tough all year,” Owens said of Sheppard. “He’s won a lot of races. He’s always a factor. That whole team, they’re just clicking real well and they’ve got their stuff together. But I feel like our team’s clicking pretty good too. If we can just keep things rolling our way.”

Disaster nearly struck for Owens with just seven laps remaining in the distance when Jason Jameson of Lawrenceburg, Ind., spun in front of the frontrunners. Narrowly avoiding contact as he shot down the backstretch, Owens drove away in the final laps to score his 61st career Lucas Oil Series victory.

“I was watching them and I seen them battling pretty hard there,” Owens said. “I was on my toes waiting on something to happen. I didn’t expect anything to happen. But I wanted to be prepared if something did … I seen those two get together. I don’t know what happened. But I seen Jameson spinning and I was able to avoid him.”

“We were able to slide him there one time but he got back by us,” Sheppard said. “He crossed me over there and got back by us. But all in all, a second-place run, we can’t hang our heads about that. Our car’s phenomenal once again tonight and I can’t say enough about my guys. … We’re just going to ride this wave as long as we can. Bad luck’s going to come at some point. It happens to everybody. But hopefully not to us.”

Starting outside the third row, Sheppard’s strategy going into Thursday’s main event was to get to the front of the field as quickly as possible. It was another solid finish for the Rocket Chassis house car driver, who entered Thursday’s show fresh off his third career Illini 100 victory at Farmer City (Ill.) Raceway.

“I really was trying to be patient to a certain extent,” Sheppard said. “But on the other hand I was trying to get the lead early because I knew clean air means a lot to these cars right now. I knew if I got the lead I could maintain and run a good line there. It rubbered up there when I got to second, about 10-15 (laps) to go. Owens, I passed him one time and he crossed me over and got me back. He just did a really good job.”

After losing position in the early running, Davenport rallied back to a podium finish. He’ll carry a comfortable lead in the series points standings heading into the remainder of the four-race weekend.

“I don’t think anybody had anything for (Owens),” Davenport said. “He was really good. But clean air means a lot too, even on this little place. I thought we was in trouble early there. We actually moved forward and then we fell back. It was like I kept choosing the wrong lane. As soon as the racetrack cleaned up a little bit, our car got really good there. We just struggle a little bit when it’s dirty. We’ll put our heads together and see if we can’t make that a little better. I just didn’t want to tear my tires up too much when it was dirty, so maybe I just wasn’t going hard enough.”

Notes: Owens had to switch to a backup car after breaking a fan blade in hot laps. … Feature cars took the track shortly after 8:30 p.m. Eastern. ... The race was slowed by five cautions. ... The first yellow flag waved on lap 19 when Don O'Neal slowed with a flat tire. ... Josh Richards slowed off the pace in the top of turns one and two to draw a caution on lap 22. He rejoined the tail of the field but retired one lap later with front-end damage. ... A yellow flag flew on lap 27 when Billy Moyer Jr. slowed with a flat tire. ... Kyle Bronson slowed off the pace to draw a caution on lap 32. ... The final yellow flag waved on lap 43 when Jason Jameson spun in front of the race leaders, with Owens narrowly avoiding contact. ... Jon Henry piloted a Frank Heckenast Jr. backup car, narrowly missing a feature transfer spot. … Colton Flinner departed Atomic after experiencing mechanical issues in hot laps. … The fifth annual event was rescheduled for April after its original March 15 date was rained out.