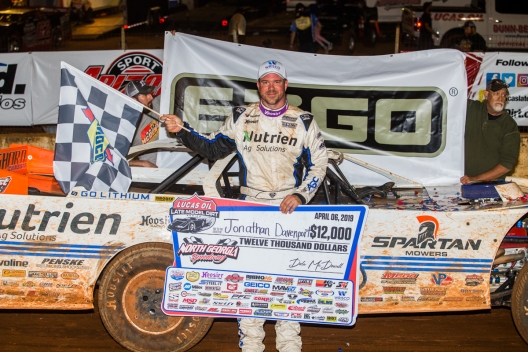 CHATSWORTH, Ga. — Fourth-starting Jonathan Davenport knew that the front was likely the best place for him to be. Exactly when he wanted to make his move, well, that was a different story. Davenport, of Blairsville, Ga., stalked race-long leader David Payne of Murphy, N.C., for nearly 20 laps of Saturday’s Lucas Oil Dirt Late Model Series-sanctioned main event at North Georgia Speedway before he finally decided to seize control.

Davenport drove under Payne exiting turn two on lap 20 to take the lead and went on to win the attrition-filled 50-lapper. He paced the final 30 circuits, finishing 2.131 seconds ahead of runner-up Don O’Neal of Martinsville, Ind., for his series-leading fourth Lucas Oil Series win of the season and 39th of his career, earning $12,000.

“I really thought I might have got the lead too early because I was afraid (the track) was gonna make that late transition back to the top and I wasn’t gonna catch it fast enough,” said Davenport. “David (Payne) took off really fast there and with these 1350s (tire compound) I just didn’t want to go too fast too early and go ahead and blister it right off the bat.”

Josh Richards of Shinnston, W.Va., finished third after starting from the pole, giving Clint Bowyer Racing two on the podium, while seventh-starting Devin Moran of Dresden, Ohio, finished fourth. Earl Pearson Jr. of Jacksonville, Fla., who started way back in 16th, rallied to complete the top five in a race slowed by 10 cautions.

Payne, who set the overall fast time, darted into the lead ahead of Richards at the start and quickly pulled away. Richards bobbled on the second lap and slipped back to sixth, while Dale McDowell of Chickamauga, Ga., and Davenport race chase. The first of the many cautions came out on lap six when Jason Jameson of Lawrenceburg, Ind., spun in turn two. When McDowell ducked into the pits for a tire change, Davenport — who was busy trying to manage his tires — was elevated to second.

“I just stayed kinda smooth with it and let (the tires) come up to temperature and then I saw the top coming back in,” Davenport said. “Earl (Pearson Jr.) and them cleaned it off on one of those restarts and he about got back by me on the outside. I finally got by him on the bottom there those couple laps we raced.”

With a clean shot at Payne following a caution for Stormy Scott of Las Cruces, N.M., on lap 17, Davenport made his bid for the lead.

“David was still slowing down trying to get to the bottom so I got me a good run off the top of (turn) one and turned under him,” Davenport said. “Then I could kinda set my pace there and could kinda run where I wanted to and try different lines and just judge from my crew guy showing me how much of a lead I had. I never really had a huge lead I don’t think, but I had just enough that I could move around a little bit.

While Davenport seemingly had a smooth go of it up front, he had a handful of pursuers either make miscues or have trouble. Payne spun out of contention on lap 25, losing a top-three spot. Moran was running second when he nearly spun on lap 35 and lost several positions. Tyler Erb of New Waverly, Texas, was up to second when he spun on lap 37. A lap later, Jacob Hawkins of Fairmont, W.Va., slowed to a stop, giving up the second spot while bringing out the eighth caution.

That allowed the steady-running CBR teammates to work their way into contention.

“After our luck last night (at 411 Motor Speedway), we’ll take second place,” said O’Neal. “And it was a good night for the Bowyer cars. Both of us fell back and then come back. (Richards) slid me that one time and just slid me a little too hard and I got back around him. (Davenport) could just get through the rough a little bit better. He didn’t have to lean on the top up there in (turns) one and two and I’d get up there and lean on it pretty good and I think that was the difference.”

Richards, who slipped to sixth in the initial start, had to work hard to make his way back to the podium. After winning the first heat and starting from the pole of the feature, he felt like his early mistake may have cost him a chance at his first victory with CBR.

“I wanted to try to get the jump and get out front and I drove off into (turn) three and the car just got sideways and I feel like that could have potentially cost us the race,” Richards said. “At least, I feel like it cost us for getting the car beat up and somewhere we could have rode a little better up front. We’ve had some speed. We’ve just got to get where we’re finishing better. You know, it’s not what we wanted, but at least we’re up here in the top three.”

Drivers contended with a rugged racing surface resulting in double-digit cautions, many for solo spins including: Jameson on lap six; Aaron Ridley on lap 20; Ryan King on lap 21; Erb on lap 37; Kyle Bronson on lap 39; and Jimmy Owens on lap 42. While most of the spins came in turn two, Davenport said it was the opposite end of the track that caused him the most trouble.

“I felt like I was better through (turns) one and two than I was in three and four,” the race winner said. “I was struggling a little in three and four because the line I wanted to run I never could figure out how to do it. I would bicycle a couple of times if I really pinched the car off in the bottom. I wanted to leave off of four in the bottom but could never figure out how to do it. “I finally got to where I was losing a lot of speed down the front straightaway and I was afraid they were gonna start ringing the top and get a run on me and slide me getting into (turn) one, so I just tried to stay patient as I could the last 10-15 laps and go ahead an jump up on the top and get up on the wheel.”

Notes: Davenport’s victory puts him fifth on the Lucas Oil Series all-time win list. … Fast qualifier David Payne of Murphy, N.C., winner of Tri-County Racetrack’s $2,000 season-opener on Friday, was the last Super Late Model to arrive and the last one to take the track during qualifying. His mark of 12.236 was only two-tenths off the North Georgia track record set in 2008 by Dale McDowell. … Kyle Bronson of Brandon, Fla., went to a backup car before his consolation race. Bronson was among the drivers caught up in wrecks during heat action. … Dalton Polston, Booger Brooks, Lamar Haygood and Friday winner Ross Bailes each scratched from the first consolation, while Jimmy Owens and Kurt English scratched from the second consy. … Bailes and Brandon Overton of Evans, Ga., were among notables failing to qualify for the feature. … Michael Page of Douglasville, Ga., was black-flagged on lap six because he wasn’t wearing gloves. … Dale McDowell pitted during a lap-six caution with a flat left rear tire, giving up the second spot.