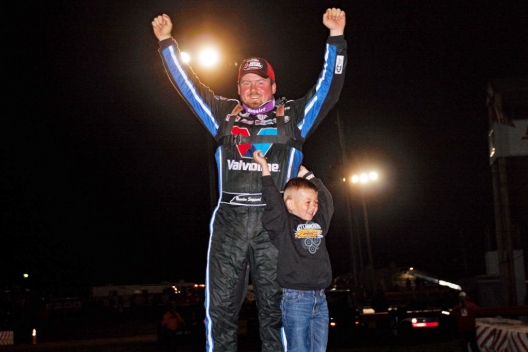 Overtaking Tanner English of Benton, Ky., on the 33rd of 75 laps, the fourth-starting Sheppard led the rest of the way, pulling away in the final circuits to capture his series-leading sixth World of Outlaws triumph of the 2019 season and third career Illini 100 victory.

“I feel amazing,” Sheppard said of his early season success. “It’s one of them deals where I’m just kind of riding the wave as long as I can. I know it’s going to come to an end at some point but it’s hard to say right now. Our car’s been consistent everywhere we go and that’s what it takes. As long as we can stay in the top three every night, the wins are going to come. Luckily for me, stuff’s playing in my favor.”

Swapping position with polesitter Ricky Weiss of Headingly, Manitoba, in the early running, Sheppard moved into second on a lap-21 restart. Charging around the high side, Sheppard shot past English as the pair worked their way down the backstretch, edging ahead at the line to assume the point on the 33rd circuit. Despite the race’s string of cautions, Sheppard would never be seriously challenged for the lead through the remainder of the distance.

“Tonight, me and Ricky (Weiss) and (Tanner) English had a really good race going,” Sheppard said. “We were slicing and dicing up there for a while. We kind of got a run there on the outside and showed Tanner, whoever was spotting for Tanner, that the top was pretty good there. Then Tanner went to the top and slowed Weiss down a little bit, then went back to the bottom and that allowed me to go back to the top. I feel like I made the right moves and the car was just phenomenal like it has been all year.”

Running in second early worked to Sheppard’s advantage, as the Rocket house car driver was able to maneuver around the track to find the fastest line. When English moved out of the high groove, Sheppard shot back to the top side of the track and powered to the front of the field.

“The way our car is right now, clean air is huge,” Sheppard said. “In clean air, we can roll. In my mind I was like, ‘I need to get the lead early so that I can clear my head and get the right line ran in and figured out.’ It’s hard, running second there, when the guy in the lead is in the right line and you’re chasing, trying to find a different line. You kind of find some other lines. That was my goal when I was running second, or even third, to try to move around, search around, and see where I could find speed.”

“It was a good night,” Mars said. “I’d get my momentum going and kind of felt like I had a groove going and then they’d have a caution. I’d just get kind of screwed up there a little bit. But that was just me knocking the rust off more than anything. Overall, the car felt good. If there would have been a good driver in it, it might of had a chance of winning.”

Making his first start since January’s off-season action in Arizona, Mars, the 2012 Illini 100 winner, said he felt like he was able to close the distance between himself and Sheppard in the middle stages of the race. But in the final circuits, Sheppard was in a league of his own.

“I found the middle pretty good in (turns) one and two and thought I was gaining on (Sheppard) a little bit,” Mars said. “But he got moved around where he needed to be and he was probably better right then. But it was good. The second night out here after Arizona. I feel like it’s been pretty good.”

After starting outside the eighth row, Pierce worked his way through the field to run among the top five on lap 50. Battling Mars and Scott James of Bright, Ind., Pierce avoided disaster when slight contact on a lap-64 restart resulted in James spinning in turns three and four. After a quiet performance in Friday’s weekend opener, Pierce was happy with his podium finish.

“Surprisingly that middle in (turns) one and two actually kind of smoothed out a little bit and in (turns) three and four, we blew all that moisture up into the middle of the racetrack, so the middle of three and four came in,” Pierce said. “It kind of made it hard to run the top. But how the weekend started, I feel like we did a complete 180, because we were way out in left field. I’m pretty happy with a third place even though I felt like we could have possibly had something for Brandon.”

Piloting a Tommy Pope-owned entry, Tanner English of Benton, Ky., clocked the overall fast time for Saturday’s Illini 100 finale. Tripping the clock with a time of 12.283 seconds, English will start on the front row of the first heat race.

Quickest in his respective time trial group, Dennis Erb Jr. of Carpentersville, Ill., will start on the pole of the third heat. Other heat race polesitters will be Brandon Sheppard of New Berlin, Ill., and Jimmy Mars of Menomonie, Wis.

The sun is shining and the Farmer City pits that were left muddy by Thursday’s rain have dried up nicely for Saturday’s show. … Nine of the top 10 finishers in Friday’s Illini 100 opener were World of Outlaws regulars. … Of the seven previous Illini 100 winners, Josh Richards of Shinnston, W.Va., is the only driver not on hand for Saturday’s finale. He’ll enter tonight’s Lucas Oil Series event at North Georgia Speedway in Chatsworth. … Billy Moyer of Batesville, Ark., tops the Illini 100 all-time win list with three victories. He was also the winner of July’s DIRTcar Summer Nationals stop at Farmer City. … Failing to qualify for Friday’s show after sustaining damage in his consolation, Shannon Babb of Moweaqua, Ill., and team changed the engine in his No. 18 on Saturday afternoon. … Suffering engine problems in Friday’s show, Myles Moos of Lincoln, Ill., will not race Saturday night. … Chuck Hummer of Lyons, Ohio, has also departed from Farmer City, while Jay Morris of Watseka, Ill., has joined the field. ... Involved in a hard crash during Friday’s heat race action, Jason Feger of Bloomington, Ill., and team have his car put back together for Saturday’s show.

Saturday’s WoO program will include hot laps, time trials, heat races, consolations and the 75-lap main event. Pro Late Models and modifieds will also be in action. DirtonDirt.com is offering live video coverage from the event.