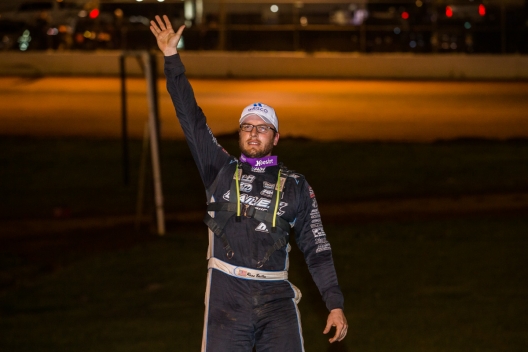 Bailes pulled away after a lap-47 caution, the seventh of the race, that set up a three-lap dash to the finish. Sixth-starting McIntosh held off Jimmy Owens of Newport, Tenn., for the runner-up spot. Owens, who started fourth and quickly advanced to second early in the distance, battled McIntosh for second for more than 30 laps before settling for third.

“I’ve led a few of these and … had a flat tire, you know … so, I’m very happy. It’s been a long time coming,” said Bailes, who was making his first-ever start at 411 Motor Speedway. “I’m excited to get the win. I feel like the first one is definitely the hardest one to get so hopefully we can start knocking them off now.”

Bailes beat fellow front-row starter McDowell into turn on on the opening lap and set sail in his Barry Wright Race Cars house car. He already had a 2.238-second lead by the time the second caution waved on lap seven and he repeatedly pulled away after each restart.

“I knew I had to get the holeshot,” said Bailes, who registered his first victory of 2019 in the BWRC house car. “The first 25 (laps) I felt like (the groove) was right around the bottom. I felt like I was gripped up really good right around the bottom. I knew it was gonna be hard for somebody to get by me around the outside. Once we got in lapped traffic, I was slowing way down to try and get by ‘em. They were actually pulling away from me a little bit, so I knew I had to change my lines a little bit. I went up top and got by one of the cars and once I got by him they were side-by-side in front of me. I just felt like the bottom was better for me, so I moved back down there.”

Bailes stayed well enough ahead of the battle for second between McIntosh and Owens. Owens took second on lap eight. while McIntosh was up to fourth by lap 10. McIntosh took the second spot from Owens on a lap-20 restart, but two laps later Owens reclaimed the position. The two fought for the bridesmaid role the rest of the feature.

“We went harder on tire than I feel like most everybody did and I was a little worried to start with, but I just kept gassing it up on the outside, hoping the outside edges would finally start digging on that thing (tire),” said McIntosh.”I feel like Jimmy didn’t realize the top was there quite as good as it was until I was able to slide him there. He raced me clean and boy it was fun. This place always races fun.

“There’s always concern you’re not gonna be able to get back past him, but that’s the fun of it, you know? That’s the game. What you’re trying to do is make good laps. And sometimes … the holes in (turns) one and two could really help you or hurt you. So yeah, to get past him, that was pretty cool.”

McIntosh finally wrestled second away on a lap-25 restart.

“Donald’s run here a lot and I’ve ran here quite a bit. He gets around this place good and it was fun,” said Owens. “We had a ball racing. I felt like I might have had him there, but that one takeoff I hit that hole and man I thought I knocked the rearend out of it. I don’t think we hurt nothing, but we’ll have to check it all.

“I let him get by me and we was able to fall back into third there and, you know, he was just running good up there on the high side. I moved around, went to the middle, I went to the high side for a lap when I was running second, but it didn’t really feel like there was anything up there without having to hustle the car. It was a little bit earlier, so I didn’t want to abuse my tires. I just tried to stay middle toward the bottom there and hoped it worked out.”

The race was slowed by seven cautions, including five in the first 25 circuits. Jason Jameson of Lawrenceburg, Ind., spun on lap two. Shanon Buckingham of Morristown, Tenn., slowed on lap seven. Vic Hill of Moshiem, Tenn., spun on lap 17 and Hudson O’Neal of Martinsville, Ind., slowed to a stop on lap 20. A second caution for Buckingham, this time on lap 25, was the final yellow during the first half of the main event.

The longest green-flag run — 19 laps — came from laps 26-46. Bailes reached lapped traffic for the first time on lap 39, but was confident enough in his BWRC machine to move to the outside as he worked around backmarkers. He maintained a 1-second lead over the final 12 laps, while McIntosh and Owens battled behind him. A spin by Stormy Scott of Las Cruces, N.M., on lap 46 and a spin by Seymour, Tenn.’s Cory Hedgecock on lap 47 set up the dash to the finish erasing Bailes’ lead.

“I’ve never been here, so I didn’t really know exactly were I needed to be,” Bailes admitted. “Being the leader, you don’t really know where you need to be anyways, plus it was a new place for me. So I was kinda happy to see that caution come out. That way I wasn’t running behind somebody, but at the same time, I felt really good when I moved up top. I knew my car was really maneuverable. I didn’t want to throw it off in there the first try. I was kind easing my way to see how far I could go … seeing how far I could push the limits.

“I think if I’d stayed up there probably two or three more laps, I probably would have gotten the hang of it because I definitely got the hang of it in (turns) one and two. (Turns) three and four I didn’t really figure out all the way so that’s why as soon as I cleared that lapped car I went back to the bottom. But then when that caution come out, Lance (Wright) was signaling for me and the way he was signaling, I wasn’t really pulling away. So I had to try something different in three and four and I went right through the middle and I felt like I gripped up a lot better right through there.”

Notes: Bailes is the sixth different winner in 10 Lucas Oil Late Model Dirt Series races this season. … Competing for the first time since breaking his thumb during a World of Outlaws Morton Buildings Late Model Series race at Smoky Mountain Speedway in Maryville, Tenn., on March 23, Josh Richards of Shinnston, W.Va., finished eighth. Richards, who had a splint on the injured digit, seemed no worse for the wear after winning the second heat and running inside the top five early in the feature. … Hall of Famer Scott Bloomquist of Mooresburg, Tenn., the tour’s winningest driver, is still sidelined while recovering from a mid-March motorcycle accident. … Jesse Lowe of Crossville, Tenn., was declared the winner of the Crate Late Model feature following the disqualificatons of apparent winner Jason Welshan and runner up Trevor Sise. … Jake Whitehead of Maryville, Tenn., won his third straight Sportsman Late Model feature.