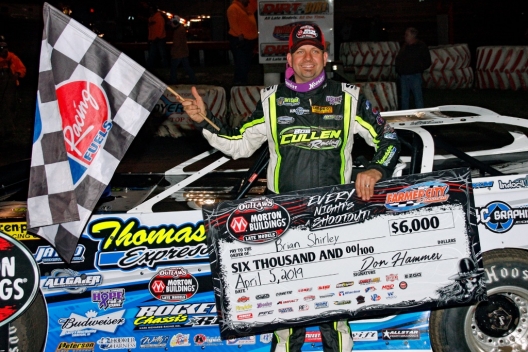 After nearly rolling his car on the sixth circuit and retaking the lead from fellow front-row starter Chris Madden of Gray Court, S.C., on lap 12, Shirley fought back a hard-charging Sheppard to capture his sixth career World of Outlaws victory, his first since the 2017 series stop at Farmer City.

“My heart was pounding and I was like ‘Holy Cow,’” Shirley said of his early mishap, which saw his car bicycle onto its right side between turns three and four but come back to earth on all four wheels after he made contact with the lapped Brent Larson. “I swerved to the right and it came back down. Thank the good Lord we were able to finish it out strong.”

Winning his heat and redrawing to start on the pole of the 25-lap main event, Shirley shot out to an early lead. After the close cal with his No. 3s machine in turns three and four, Shirley was able maintain his spot at the front of the field when Lake Elmo, Minn.'s Larson spun from the contact to draw the race’s first caution.

Using momentum from the restart, Madden charged ahead of Shirley to assume the point on lap seven. With Madden slipping out of his groove as the frontrunners exited turn two, howver, Shirley edged back ahead down the backstretch to regain the lead on lap 12. The home-state driver led the remaining distance for his second victory of 2019.

“I damn near went over there,” Shirley said. “Thank God. He knew we’d already been through that havoc once already this year.”

Throwing everything he had at Shirley in the final circuits, Sheppard finished runner-up, with Madden holding on to finish third after his mid-race misfortune. Dennis Erb Jr. of Carpentersville, Ill., advanced from the eighth starting spot to run fourth, with sixth-starting Darrell Lanigan of Union, Ky., rounding out the top five.

Sheppard got his racing start at Farmer City and is the two-time and defending Illini 100 winner. But the Rocket house car driver admitted that Friday’s racing surface, much the result of heavy Thursday rain, threw him and his fellow WoO competitors a few curve balls. Sheppard saw a window of opportunity when Madden slipped mid-race and he took advantage.

“There was a lot of chaos out there,” Sheppard said. “I was trying to make sure that I swung out wide enough getting in the corner that I could be pointed straight when I got to the holes. I felt like I was doing a pretty good job of that. I was staying clear of most of the ruts and stuff. We had a really good race car.”

Sharing after his heat race win that his car owner Greg Bruening’s mother had died earlier this week, Madden was hopeful that he would end Friday evening in victory lane as a tribute to Bruening. But after nearly rolling his car, he was happy to come away with a third-place finish.

“I got turned in really nice right there in the middle of the racetrack,” Madden said. “I was going to run off the bottom when I hit that middle and the right-rear grabbed and held. It did everything but turn over. I don’t know how it didn’t turn over. I was able to get it back down and come out in third. The racetrack was really rough right there. We were just trying to hold on and dodge each other.”

Notes: Shirley celebrated his 38th birthday earlier in the week. … Shirley also won the opening night of the 2017 edition of the Illini 100. … The race was slowed by three cautions. … The first yellow flag waved on lap six when Brent Larson spun in turns three and four. … Larson slowed with a flat tire to draw another caution on lap 13. … The final yellow flag flew on lap 20 when Boom Briggs slowed on the frontstretch.

Tripping the clock with a time of 11.750 seconds, Brandon Sheppard of New Berlin, Ill., lowered the Farmer City track record in qualifying. Clocking the overall fast time for Friday’s program, he’ll start on the pole of the first heat race.

Quickest in his respective time trial group, Brian Shirley of Chatham, Ill., will start on the pole of the third heat race. Other heat race polesitters are Chris Madden of Gray Court, S.C., and Darrell Lanigan of Union, Ky.

Brandon Sheppard of New Berlin, Ill., is the two-time and defending Illini 100 winner. Other former race winners on hand for the weekend include Shannon Babb of Moweaqua, lll., Billy Moyer of Batesville, Ark., Jimmy Mars of Menomonie, Wis., and Shane Clanton of Zebulon, Ga.

Winning five of the eight World of Outlaws events contested so far this season, Sheppard enters the weekend atop the series points standings. Darrell Lanigan of Union, Ky., Chase Junghans of Manhattan, Kan., Clanton and Chris Madden of Gray Court, S.C., round out the top five in the points chase.