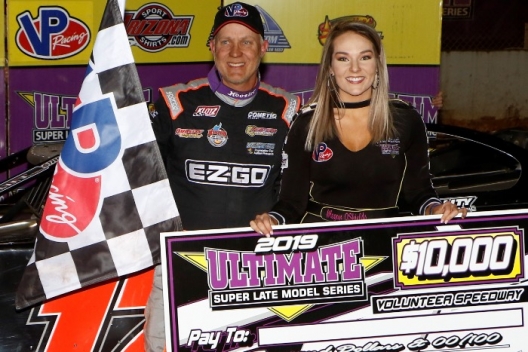 BULLS GAP, Tenn. (April 4) — Dale McDowell had to battle hard to move from the fourth starting spot to the lead in Thursday night's 50-lap Spring Thaw feature at Volunteer Speedway. Once he made it to the front, though, there was no stopping him.

After outdueling Owens amid slower traffic to assume command, McDowell pulled away following the race’s lone restart, on lap 34, to run unchallenged over the final circuits in his brother Shane’s Sweet-Bloomquist Race Car. McDowell crossed the finish line 2.395 seconds in front of Owens, who led laps 14-31 in his Ramirez Motorsports XR1 Rocket machine after wrestling the top spot from early pacesetter Michael Chilton of Salvisa, Ky.

Fifth-starter Brandon Overton of Evans, Ga., finished third in the Rum Runner Racing XR1 Rocket after climbing as high as second with a lap-15 pass of Chilton. He briefly closed within striking distance of Owens before ceding second to McDowell on lap 25 and settling into the show position for the remainder of the distance.

Third-starter Shanon Buckingham of Morristown, Tenn., finished fourth in a Longhorn car and seventh-starter Ross Bailes of Clover, S.C., shot into fifth shortly after the lap-34 restart and kept his Barry Wright Race Cars house car in the spot to the checkered flag.

Chilton came off the outside pole to outgun Owens for the lead at the initial green flag, but after pacing laps 1-13 he faded to a 10th-place finish.

McDowell didn’t get off to a quick start, but once his tires heated up and he made the inside lane work he became the class of the mid-week field.

“I knew it was gonna be rough,” McDowell said. “Brandon (Overton) jumped up through there early (to get to second place) and we had a little bit different right-front tire and I pushed there early a couple laps. Then when Jimmy got in that lapped traffic, it’s so hard to lead, but he’s so good in that stuff so it was really just picking a lane that he wasn’t in and trying to see if I could get some straight-line traction.

“Shane made some good adjustments on the car and the car was pretty good, so it was good night for our E-Z-Go hot rod.”

McDowell’s triumph was his third at a Southeast track in as many weeks, following $4,000 Schaeffer’s Spring Nationals scores on March 22 at Oglethorpe Speedway Park near Savannah, Ga., and March 29 at Talladega Short Track in Eastaboga, Ala. He had fallen just short of victory lane, however, in his two attempts for $10,000 wins in Spring Nationals shows over the past couple weeks, finishing third on March 23 at Cochran (Ga.) Motor Speedway and fourth on March 30 at Senoia (Ga.) Raceway.

The victory also continued McDowell’s history of success at Volunteer, a high-banked oval that has treated him well throughout his career but especially over the past decade. Since 2010 he’s now tallied seven wins, 14 top-five and 18 top-10 finishes in 23 starts at the track.

“This place races awesome, especially when it’s like that — not just because we won, but just because we could get up there and race and pass,’ McDowell commented. “Anywhere you can go and pass it’s a lot of fun, so I really enjoy racing here.”

Owens, 47, was pleased with the performance of his vehicle but conceded that McDowell was simply better on this night.

“We had a good car,” said Owens, who in his last home-state appearance, on March 23 at Smoky Mountain Speedway in Maryville, Tenn., won a World of Outlaws Morton Buildings Late Model Series event. “We hot-lapped pretty good, qualified decent and had a really good car in the heat race there. We just made a couple of wrong decisions (for the feature).

“This is a new car, we tried it out this weekend, and it’s a really good hot rod. I’m looking forward to the rest of the weekend,” added the veteran driver who will join McDowell in entering Lucas Oil Late Model Dirt Series events on Friday and Saturday at 411 Motor Speedway in Seymour, Tenn., and North Georgia Speedway in Chatsworth, Ga.

Overton, who turns 28 on April 13, left Volunteer with his morale boosted after a podium finish. He’s been fighting to get rolling in his new deal with the Coulter family’s equipment.

“This was a big step in the right direction tonight for sure,” Overton said. “It feels good to be up here and top three with two good cars in front of us.

“Kind of the middle stage of the race I was gaining on Jimmy there. I know Dale had a different tire (though) and when he passed me I was just kind of, ‘Sit back and watch the show.’”

In a feature that was completed in just over 14 minutes, the only caution flag flew on lap 34 when Daulton Wilson pulled up lame.