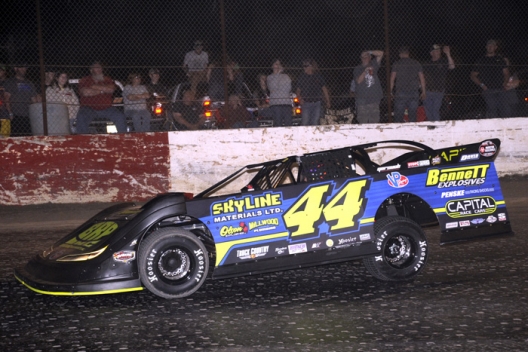 SENOIA, Ga. — It was only a matter of time before Chris Madden made his way back to victory lane. Shutout through the first 11 races he’d entered this season since taking the wheel of Greg Bruening’s Capital Race Car in the offseason, Madden finally broke through, winning Saturday’s 60-lap Schaeffer’s Spring Nationals main event at Senoia Raceway.

“We’ve just got to give a lot of thanks to all these people that support us,” said Madden. “Capital Race Cars right here, you know, this thing was awesome tonight. We’ve really had a good race car all year, we just hadn’t got the win to show for it.”

Madden, of Gray Court, S.C., took the lead from second-starting Michael Page of Douglasville, Ga., on lap 12 and led the rest of the way, earning $10,000 for his fourth career victory on the Ray Cook-promoted tour and first win for Decorah, Iowa’s Bruening.

Madden, his voice cracking ever so slightly in victory lane, was quick to thank his longtime sponsors, as well as Capital Race Cars founder Marshall Green and his close friend and fellow Capital campaigner Shane Clanton, who finished ninth. Madden also gave a nod to “Greg (Bruening) and Tyler and Zeb and all those guys that give us an opportunity to do this.”

“Tonight, the racetrack was perfect for a long enough time for us to get out front. It’s a little emotional here to finally get this win,” Madden added. “We’ve been working hard for it … I’m kinda at a loss for words. It’s just awesome to get this first win.”

Page grabbed the lead from polesitter Austin Horton of Newnan, Ga., on the opening lap, but it was Owens and Madden, who started alongside each other on the second row, who were on the move early. Madden, who was up to second by lap four, stalked Page for four laps until finally wrestling the lead away. He looked both high and low before he slid under Page in turn two on lap 11, taking the lead away to pace lap 12.

“(I) just really couldn’t turn in the beginning and then couldn’t come off (the corner) at the end,” said Page. “I’ve gotta do some work on my (left rear) chain thing ‘cause it’s just like, when it hits it, it just stops the car. So I just gotta try something a little different and maybe I’ll be a little better.

“I wasn’t expecting (the track) to take rubber so I went on a soft right front (tire) and should’ve went on a hard (tire). I just couldn’t steer and you gotta be able to turn around here. But it was fun. We did what we could do.”

Owens said his car’s setup may have been off just a tick because of his tire choice as well. He passed Page for second on a lap-15 restart and the two traded sliders on lap 25 before Owens finally secured the position for good.

“We could get going pretty good on the restarts and stuff, but Madden was the class of the field,” said Owens, who was making a cameo appearance in a Tommy Pope-owned car at both Talladega on Friday and Senoia on Saturday. “We didn’t have nothing for him. We’re happy to come home with a second-place car, especially after (Friday) night’s performance. Those guys worked on the car and we talked some things over and you know we had a really good hot rod tonight.

“We just made a couple tire choices that maybe wasn’t the best, but it was a learning curve. I gotta thank Tommy Pope for inviting us down to drive his car this weekend.”

Notes: The win was Madden’s first in six months. It took him twice as long to snare his first win this season as it did in 2018 — Madden’s first win of ’18 came in his sixth start — and he’d gone a stretch of 17 races without a victory. His last win was a Lucas Oil Dirt Late Model Series triumph at Rome (Ga.) Speedway on Sept. 30. … The race was slowed by two cautions. … Zach Leonhardi of Cartersville, Ga., slowed on lap 15 to bring out the first caution. Leonhardi, who won at Senoia on March 9, never really got rolling and finished 21st. … Dalton Polston of Lithia Springs, Ga., slowed on lap 54 to draw the second caution. … … Along with Owens, Tanner English of Benton, Ky., who rallied from 18th to finish 11th, was also piloting a Tommy Pope-owned machine. … After starting from the pole, Austin Horton was shuffled back to fifth by lap two. He eventually finished eighth. … The Schaeffer's Spring Nationals Series wrapped up its weekend doubleheader. McDowell scored his second series victory of the season on Friday at Talladega Short Track. … There have been three different winners in four events.