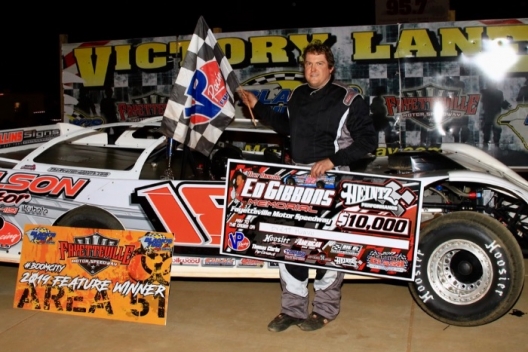 “I’ve known (the Gibbons family) forever,” Hamm said after the race. “They’re great, great people. To make this my biggest win so far, it is perfect. I can’t plan it out any better. We’re definitely extremely happy, ecstatic over it.”

Winning his heat race to start on the outside pole of the 11th annual event, Hamm shot to the front of the field at the drop of the green flag and paced the entire 50-lap distance. Holding off a late-race challenge from fifth-starting Trent Ivey of Union, S.C., Hamm scored his second career Carolina Clash victory, his first since may 2016.

“It’s a challenging place,” Hamm said of Fayetteville. “It was really abrasive tonight. It was around the bottom. We knew that. We got around on that start, got a good take off, got down, got around and Ross (Bailes) gave me room. I have to give him kudos for that because he probably could have parked me on that deal too. But you’ve got to take that chance. … everything just kind of clicked. We’re a little team and this is a big deal for us.”

Despite a string of early cautions, Hamm set a blistering pace from the start. Knowing from experience that lapped traffic can sometimes be tricky at Fayetteville, Hamm said he wanted to extend his lead as much as possible before he caught up to the tail end of the field. His strategy paid off at the checkered flag.

“We got out there pretty good at the start,” Hamm said. “They were trying to signal me to slow down and, simply put, I wanted to get as big a lead (as he could) before I caught lapped traffic, because I knew I would need to use all of it I could. Lapped traffic here can be a little bit dicey because you have one or one-and-a-half grooves to work with. You really have to hit it right. We managed our stuff about where we needed to be. I didn’t want to slow down too much but we didn’t want to go too fast.”

“I don’t think I’ve ever driven anything that good. A second feels like a win right now,” Ivey said. “My dad, he really preached to me about saving your stuff, watching your tires, especially in these kind of conditions. I listened to my old man. I was riding, saving my stuff, just trying to hang in there and not get into anything and it worked out.”

Ivey, who qualified for his first Super Late Model event in the March 24 Southern All Stars Series stop at Cherokee Speedway in Gaffney, S.C., closed the gap between himself and Hamm with 10 laps remaining in the distance. But despite his late-race charge, Ivey was never able to seriously challenge for the lead. Regardless, the 24-year-old second-generation driver was smiling ear-to-ear over his second-place finish.

While early restarts proved a challenge for Bailes, the Barry Wright house car pilot wheeled his No. 87 to his third podium finish of the 2019 season.

“It was kind of one-lane,” Bailes said. “On those restarts, I just didn’t know if I needed to be on the bottom or the top. That one time Dustin (Mitchell), he got a good start on me. And Brett (Hamm), on the initial start, he got a good run on me. I didn’t know where to be. We just missed it a little bit. But we’ve been right there in the top two or three the past three weekends, so we’re right there gunning for a win and close to it.”

Notes: The race kicked off Fayetteville’s 2019 season. ... Second-running Dustin Mitchell retired early after suffering mechanical trouble on lap 29. … The feature was slowed by six cautions, with the first two brought out by Chris Ferguson, who fought engine problems throughout the night. ... Devin Moran was running sixth when a bolt in his brake pedal snapped, forcing him to retire the Dunn Benson Racing entry early. ... World of Outlaws rookie contender Kyle Hardy entered the event in preparation for Fayetteville's May 10-11 First in Flight 100, a $25,000-to-win WoO show. After having an early move to third place negated by a caution flag, Hardy retired around the halfway point while running seventh due to a broken left-rear shock mount. ... The Carolina Clash returns to Fayetteville on Aug. 10 and Sept. 28.