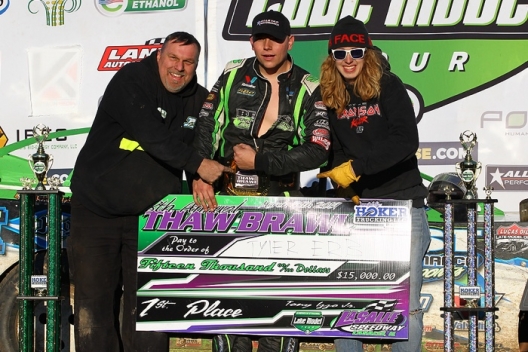 “I think this is the most money I’ve ever won in one race so it’s something to build off of,” said Erb, a Lucas Oil Late Model Dirt Series regular for the first time this season after spending the past three chasing the World of Outlaws Morton Buildings Late Model Series. “We’ve got a long year still, but everything’s going real well right now."

What was indeed the richest win of Erb’s young career came in memorable fashion, a command performance by a driver whose development has become supercharged since he earned his first national touring series victories last September and landed the seat with Eric Brock’s established St. Marys, Ohio-based Best Performance team less than two months later.

Erb showed a veteran’s poise in steadily climbing forward from the 11th starting spot on La Salle’s physical springtime surface. He then pounced in the American Ethanol Late Model Tour-sanctioned feature’s final moments, grabbing the lead for the second and last time on lap 72 by powering around the outside of fellow 22-year-old Bobby Pierce of Oakwood, Ill.

Erb proceeded to calmly keep his XR1 Rocket machine on the bottom of the quarter-mile oval to hold off the comeback attempts of Pierce, who crossed the finish line 0.735 of a second behind Erb in the runner-up spot after starting seventh and leading laps 66-71 in his family-owned XR1 Rocket.

Chris Simpson of Oxford, Iowa, fell short in his bid to become the first back-to-back winner of the Thaw Brawl, finishing third after leading laps 41-63 in his new XR1 Rocket machine. He inherited the top spot when Brian Shirley of Chatham, Ill., slowed on lap 41 with a flat right-rear tire and appeared primed for another La Salle celebration until he had trouble with a lapped car, slowing his momentum enough for Erb to vault past both Pierce and Simpson to assume command for the first time on lap 64.

Dennis Erb Jr. of Carpentersville, Ill., ran quietly among the top five throughout the distance en route to finishing close behind the leaders in fourth place with his XR1 Rocket mount. Ricky Weiss of Headingley, Manitoba, placed fifth in his Sweet-Bloomquist car after starting 16th.

The wildly competitive race run on a cold, sunny afternoon produced nine lead changes among five drivers. Joining Erb, Pierce and Simpson as pacesetters were Shirley (laps 2, 4-27 and 29-40) and polesitter Kyle Bronson of Brandon, Fla., who nosed ahead of Shirley to lead laps 1, 3 and 28 before a broken j-bar eliminated him on lap 37 as he was running second.

Erb summed up the event’s unpredictability during the post-race interview he conducted in victory lane after receiving the Thaw Brawl’s championship belt.

“I mean, you really didn’t know who was gonna win,” said Erb, who recorded his first-ever victory on the American Ethanol Tour. “I thought Squirrel (Shirley) had a pretty good lead, and then the lapped cars started coming and going (to tighten the action up front after Simpson succeeded Shirley as the leader).”

Erb found himself sitting third behind Simpson and Pierce after Shirley bought out the caution flag on lap 41. He shot past Pierce for second on the restart, but a lap-44 slip over the cushion in turn two allowed Pierce to regain the bridesmaid spot. Erb then wasn’t initially able to make the tricky outside lane work again following a lap-46 caution period and he settled into third behind Pierce.

“I knew I could make that top work there maybe one out of every three or four times, so I was just trying my best to get it going on those restarts,” Erb related. “I thought I was gonna have ‘em there on that one (lap 41) and then Bobby got back by me and I fell in line.”

But as Erb noted, he didn’t give up over the feature’s final 29-lap stretch of green-flag racing.

“Hey, we come to win, so we didn’t have much to lose,” Erb said. “I just kept trying it and trying it (the top) down there (in turns one and two), and if I could hit it just right …”

That happened on lap 64. After Simpson lost speed attempting to lap Bob Gardner of Washington, Ill., both Pierce and Erb closed right up on the leader. Simpson actually slid sideways behind Gardner on the homestretch on lap 62, and then on the ensuing circuit Erb seized the opportunity to surge by both Pierce and Simpson off turn two and he was the first to cross the start/finish line as lap 64 went was scored.

Pierce rallied by jumping to the outside and surging past Erb for the lead on lap 66, but problems with a lapped car also doomed the home-state standout. On lap 70 Pierce’s inside lane ended up blocked by Travis Stemler of Ionia, Mich., and, after he made contact with Stemler off turn two, Erb gained a head of steam on the outside. Pierce barely led lap 71 before Erb — on the outside of Stemler with Pierce on the inside — lurched ahead at the starter’s stand on the 72nd circuit.

From there Erb just held on for dear life, sticking to the bottom after the outside had provided him the quick boost he needed to assume command.

“I knew down here (in turns three and four) it was just too dirty (to run the outside),” Erb said. “But down here (in turns one and two), if I could hit it (the top) just right, I wouldn’t lose anything at worst. I finally got clear of Bobby once there and I was able to kind of chop him getting into three.

“Then on the next one I think we hit wheels a little bit, like he got into my left-rear, but you’re racing for the lead. It’s a lot of money. We don’t want to run second or third or fourth.

“It was a hell of a race there with Bobby, and Chris too,” he added. “When we got to lappers, it was crazy. The invert (for heat starting spots after qualifying) kind of put us all behind, Chris included. The faster cars getting inverted back in the heats made it a lot tougher.”

The final result, though, made Erb’s rare visit to La Salle worthwhile.

“This is just awesome,” Erb said. “This is what we came to do. We sat here for four days (due to bad weather that turned the scheduled Friday-Saturday weekend into a Sunday-only show) and it feels really good. I’m super stoked.”

Pierce, who won the Thaw Brawl in 2015, was well aware that he participated in a thriller of a feature. It took some of the sting away from failing to claim the checkered flag.

“Man, that could’ve went either way between the three of us,” Pierce said. “It was a heck of a track. It had some holes here and there, but that adds character. I just wish we could’ve gotten the win.”

A problem under the hood — one that prompted Pierce to hastily take his car to his trailer following the feature — hampered his during the race.

“I rushed back (to the pits) because I didn’t know if there was something was wrong with the motor,” Pierce related. “The wire-tie to set the idle when you’re warming up the motor got stuck under there so it was idling on 4-grand (RPMs) the whole race. It made it a little difficult to drive when I let off. It kept wanting to motor on into the corner, so I was abusing the brakes pretty hard.”

Nevertheless, Pierce felt fortunate to be in the mix for the big prize after starting seventh in an afternoon show.

“I knew it was gonna be tough to get to the front in general after that (heat) invert today,” Pierce said. “I said it all day, Everyone’s so close now, it’s just hard to do that to us. Next time I know to sandbag a little bit more (in qualifying).

“Luckily (promoter Tony Izzo Jr.) gave us a track we could race on and get to the front. You couldn’t really ask for much more, especially in a day race. This is about the best you can get it. I think they did great.”

“We just kind of hung out there for the first part (of the race),” said Simpson, who started eighth. “I just kind of picked ‘em off here and there, and then Shirley ended up breaking (to put Simpson in front).

Simpson paused. His disappointment with the outcome was evident, but the 35-year-old attempted to look on the bright side.

“I’m not gonna sit here and whine about it,” said Simpson, who made his first start since January’s Keyser Manufacturing Wild West Shootout at Arizona Speedway near Phoenix. “We got beat and we’ll go work hard.

“To start out the year (in the Midwest with a new Rocket Chassis) and run third and lead a lot of it, we’ll take it and go on.”

Six caution flags slowed the A-main, all within the first 46 laps. The first slowdowns came for backstretch spins, on lap 11 for Scott Schmitt and lap 13 for Hudson O’Neal. Additional cautions flew on lap 31 for reigning American Ethanol Tour champion Brandon Thirlby’s slide to a stop between turns one and two as he was being lapped; lap 32 when Shannon Babb slowed while running eighth and retired; lap 41 when Shirley dropped off the pace as he led; and lap 46 for a three-car tangle in turn two involving then fifth-place Rusty Schlenk, Frank Heckenast Jr. and Stemler.