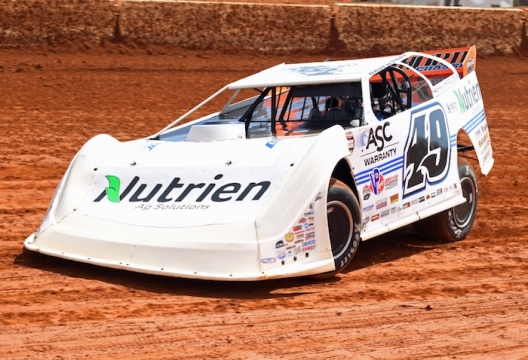 Maintaining a smooth, patient approach after grabbing the lead on lap two proved to be a winning formula for Davenport, who kept his Double L Racing Longhorn machine’s tires under him while many other contenders succumbed to dying rubber and claimed a $12,000 victory in the Southern All Star Series-sanctioned event.

Davenport, 35, of Blairsville, Ga., was never headed nor even seriously challenged once he gained command from Ross Bailes of Clover, S.C., who shot off the outside pole to lead the first lap over the reigning Lucas Oil Late Model Dirt Series champion. J.D. survived several restarts — most caused by drivers hampered by tire troubles — as he calmly kept his pursuers at bay to capture the 4/10-mile oval’s March Madness show for a record fourth time in his career.

“I know this wasn’t the most funnest race to watch,” said Davenport, whose fourth overall win of 2019 was his first since his three-victory Georgia-Florida Speedweeks with the Lucas Oil Series in February. “It wasn’t the most funnest to drive, but it was definitely technical in the car. You say a lot of people had flats, (but) there’s a lot of people who done a real good job at saving their stuff.

“We had to save (rubber) from lap one. I knew it was gonna be an attrition tire game. We just had to pace ourselves, not get too excited in lapped traffic.”

Davenport pulled away following a final caution flag with three laps remaining, leaving Bailes to settle for the $5,000 runner-up check in the Barry Wright Race Cars house car, crossing the finish line 1.735 seconds behind Davenport. The 29-year-old Bailes ceded second place to Jimmy Owens of Newport, Tenn., on lap 22 but battled back to regain the spot for good on a lap-52 restart.

Owens, 47, finished third in his Ramirez Motorsports XR1 Rocket one night after scoring a $12,000 World of Outlaws Morton Buildings Late Model Series triumph at Smoky Mountain Speedway in Maryville, Tenn. His second consecutive top-five finish righted a choppy start to his 2019 season that saw him tally just a single top-five run in his first 13 starts.

Davenport hailed his Jason Durham-led crew for giving him a vehicle that allowed him to run a steady, smooth course to victory lane. He kept his car tucked snugly to the track’s preferred inside lane throughout the distance, noticeably refraining from sliding it hard while negotiating the corners.

“I just got to thank my guys,” Davenport said. “They set this thing up perfect. I never had to hustle the car. It just drove around there so easy. That’s definitely what made it easy for me.

While Davenport’s No. 49 did sustain some minor right-rear bodywork damage during the race — he even stopped during one caution to have an official peruse it — he was more focused on maintaining tire tread than wondering if the sheet metal might cut his shoe.

“You just never know. It’s always in the back of your mind,” Davenport said when asked about the damage. “I didn’t really know how much it was rubbing there, but I knew if anybody could make the full 60 (laps), I had a pretty good chance being out front, being able to set the pace. I didn’t have to be behind anybody, in anybody else’s grit. I was just trying to not even hit the brake pedal and use the gas as less as possible and we made it to the end.”

The triumph provided Davenport an opportunity to share victory lane with his young son Blane, a kindergartener who was a toddler the last time his dad grabbed a checkered flag at Cherokee.

“It’s been a long time since I won here,” said Davenport, a previous March Madness winner in 2009, ’11 and ’14 whose last Cherokee victory came on June 19, 2015, in a Lucas Oil Series event. “I remember (Blane) was just a little guy, hardly old enough to run. He run and jumped in my arms (after the ’15 win), so that was definitely cool for him to be here again with me.”

Bailes felt the race was largely decided at the initial green when he was unable to pull ahead of Davenport after narrowly leading the first lap. Passing was difficult on the afternoon racing surface, making track position critical.

“Jonathan, he got the jump (to grab the lead on lap two),” said Bailes, who is in his second tour of duty with the BWRC house car team. “He had a really good car, but that’s all it took. Just whoever got out front.”

Bailes was able to take advantage of a restart with eight laps remaining to reclaim second from Owens, though he couldn’t press the issue in an effort to challenge Davenport following a lap-57 caution period because he wasn’t sure how much rubber he had left.

“I was worried about it those last 10 laps,” Bailes said. “He had a lot more tire left than we did. I was just trying to hold on there at the end.”

Owens, meanwhile, professed little hope of overtaking Davenport while running second for much of the race’s second half. He mourned that he cost himself a runner-up finish by making a mistake on the lap-52 restart.

“He had a good hot rod,” Owens said of Davenport. “I could keep an eye on his tires (while racing behind the leader) and I known I was taking care of mine pretty good. I felt like I was gonna be about equal on tire wear to him. It was just choose the right lane whenever we would double-file up (for restarts), and I just chose the wrong lane (on lap 52) and let Ross get by us.”

Notes: Davenport’s ninth career Southern All Star win was his first since March 23, 2013, at Smoky Mountain Speedway. … Sixteen drivers completed the feature’s 60 laps. … Three-time March Madness winner Chris Madden of Gray Court, S.C., saw his hopes for another triumph diminished when he pitted for a tire change during a lap-34 caution period while running sixth. He rallied to salvage a seventh-place finish. … Madden’s Bruening Rock Products teammate, Tyler Bruening of Decorah, Iowa, made his first-ever start at Cherokee. He transferred through the B-main and finished 19th. … Racing one night after scoring a $10,000 Schaeffer’s Spring Nationals win at Cochran (Ga.) Motor Speedway, Mt. Holly, N.C.’s Ferguson pitted on lap 55 with a right-rear flat tire while running seventh. … Brandon Overton of Evans, Ga., entered the program after changing an engine in his Rum Runner Racing mount following Saturday’s WoO event at Smoky Mountain. He finished eighth. … The last driver to arrive at the track was Michael Page, who debuted a new Andy Durham engine in his Baird Motorsports car. … Reigning Southeastern Crate Association weekly champion Trent Ivey of Union, S.C., finished 22nd in his Super Late Model debut, completing 34 laps. … Benji Hicks of Mount Airy, N.C., barrel-rolled over the turn-one wall during the first heat; he wasn't injured. ... The race, a makeup of a March 3 rainout, was renamed Cherokee Speedway’s #GigiStrong March Madness in honor of beloved scorer Ginger Owens, who recently lost a battle with cancer. ... Cherokee hosts the FUEL tour on March 30.